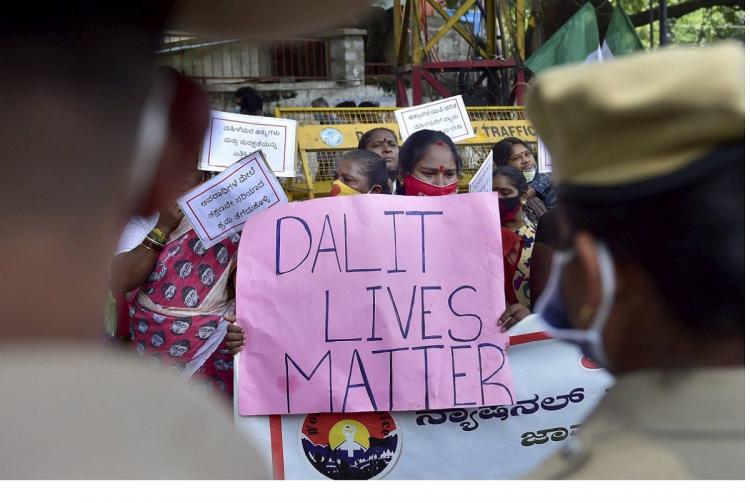 The triggers for the crimes are varied but familiar, ranging from inter-caste love to assertion for basic rights and dignity.

At the height of the COVID-19 lockdown in April, Madhu, a young man in his early 20s, found himself out of work in Bengaluru like lakhs of other workers across the country. He returned to his hometown in Alur mandal of Karnataka’s Hassan district rather reluctantly. He had left more than a year ago, fleeing the wrath of the family of the girl he loved. She belonged to the politically dominant Vokkaliga community and her family did not want her to marry a Dalit man. Forced to return because of the pandemic, Madhu started to work at a local workshop. His mother and brother, while happy to see him, were constantly worried for him and cautioned him not to get back in touch with the woman. A few days later, on July 15, Madhu was shot dead allegedly by the woman’s uncle with a country-made gun, while returning from a visit to a local temple along with his friends. The woman had got back in touch with Madhu, and her family allegedly killed him, to end the relationship.

In neighbouring Tamil Nadu, Sudhakar was murdered in very similar circumstances. The 24-year-old had returned to his village from Chennai in March, having lost his livelihood.  Sudhakar, who belonged to the Kal Oddar caste (socially considered to be the lowest among the Most Backward Caste groups), was in love with a woman from the dominant Vanniyar community. The couple had eloped and married a few months ago, but a local caste panchayat had ruled the marriage void, and Sudhakar was assaulted and made to leave the village. As he returned amid the lockdown, he was allegedly beaten to death with a hammer by the woman’s father.

Such caste violence continued unabated even amid the lockdown. In many cases, access to help and support was made even more difficult than usual because of restricted mobility. ‘No Lockdown On Caste Atrocities’, published by Dalit Human Rights Defenders Network (DHRDNet), documents 59 stories of caste crimes that occurred across the country during the COVID-19 pandemic. The DHRDNet is a coalition of over 1,000 Dalit human rights defenders from different states of India.

Some of the documented stories — like the COVID-19 patient in Kerala’s Pathanamthitta district who was sexually assaulted by an ambulance driver, and the 14-year-old girl who was allegedly drugged and sexually abused for over a year at Maruthi orphanage in Telangana and eventually lost her life — were more widely covered in the media. But the book also speaks of many other caste crimes, mainly from the states of Gujarat, Maharashtra, Rajasthan and Tamil Nadu.

The crimes range from murder, physical assault, manual scavenging, rape and sexual abuse to forcing a child to clean his faeces with his bare hands as punishment for accidentally defecating in an agricultural field belonging to a dominant caste landlord. The triggers for the crimes are also varied but familiar, ranging from inter-caste love to assertion for basic rights and dignity.

One such incident is the murder of Ravi, a Dalit landless labourer, in Keelathiruppalakkudi village in Thiruvarur district of Tamil Nadu. Ravi, who worked in the field of a dominant caste landlord for an hourly wage of Rs 35, left work early one day as he suffered from a headache. Later in the day, he was allegedly abused by the landlord Ilavarasan and his friends with casteist slurs for leaving work in the middle of the day. He asked them to reduce the wages for missed work hours. But, he was allegedly badly beaten up. When he threatened to complain to the police, the landlord and his associates allegedly threw him into a 30-feet deep dry well. He was found the next morning and taken to a hospital where he breathed his last. Ravi is survived by his wife and two daughters, nine and seven years old.

The stories also talk about the precise power dynamics in the region between the community of the victim and the perpetrator and the legal recourse taken. In the case of Ravi’s murder, the accused were booked under various sections including murder, as well as the Scheduled Castes and the Scheduled Tribes (Prevention of Atrocities) Amendment Act, 2015. They were arrested and remanded to judicial custody. However, with the low conviction rates in crimes against Dalits, justice is elusive in most cases, the author notes.

In many cases, the reason for sentencing is cited as personal rivalry and not caste hatred, thus diluting the punishment, the author notes. Even in cases that reach a  conviction, the henchmen are the ones punished while the more powerful perpetrators manage to get away with the crime, according to the publication.

DHRDNet has demanded support from the Members of Parliament for better implementation of the SC/ST (PoA) Act. Speaking about the exacerbation of caste violence amid the pandemic, a petition has been submitted with several recommendations, including setting up of SC/ST protection centres at the block level, ensuring compensation to victims, allowing filing of FIRs in SC/ST PoA cases at SC/ST cells, among other action towards identifying and addressing caste violence. The petition can be signed here.