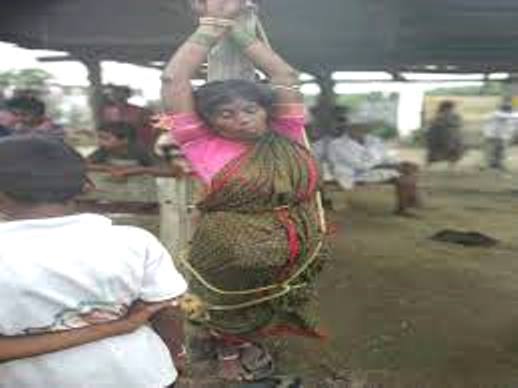 Chandrapur: Seven members of two dalit families were tied to wooden poles of a shed and beaten mercilessly by a mob in village Wani (Khurd) in hilly Jiwti tehsil on Saturday. They were attacked for allegedly practising black magic, and the thrashing continued for hours till police came to their rescue.

Police took no action till Sunday evening, and began rounding up operations only after Sunday midnight. There is an eerie silence in the village after deployment of heavy police deployment as the news spread like wildfire everywhere.

Bitterness had been brewing against the Kamble and Huke families since some time. The matter took a turn for the worse when four woman allegedly possessed by spirits (Bhanamati) named the two families on Muharram, on Friday. “The villagers held a meeting on Friday night and hatched a plan against us. A group marched to our house on Saturday morning, asking us to reach the village main square, as we were named for practising back magic by persons possessed by spirits. We agreed to go as we are innocent,” said victim Prayagbai Huke.

She said four women allegedly possessed by spirits were making a scene at the square. They were raving and babbling nonsense, and struck some of the Kambles and Hukes with sticks or threw handful of soil. This, people said, showed the spirits have nailed these people and mob hysteria took over. The Huke and Kamble family members were then thrashed.

Later, people tied Shivraj Kamble, his wife Shantabai Kamble and Prayagbai Huke to the poles and again thrashed the black and blue. Eknath Huke was beaten so mercilessly that his right hand was fractured. The village Wani (Khurd) has no phone coverage. A youth ran from the village to coverage area and informed the police. They reached hours later to rescue the victims.

TOI is in possession of videos showing the women possessed by spirits nailing the victims by throwing soil on their faces, and the mob dragging them and beating them mercilessly with kicks and punches. Shivraj Kamble and Prayagbai Huke claimed they are afraid of their lives if they go back to their village. “Villagers are keen to drive us away and might kill us. We demand police protection for our families,” Prayagbai said.

Subdivisional Police Officer (SDPO) Sushilkumar Nayak claimed the situation is under control now. “We have arrested 13 in connection with the mob assault and more arrests are likely,” he said. Those involved in the thrashing of Huke and Kamble families also belong to dalit community, but from different sect, he added.

The arrested were identified as Sugriv Shinde, Datta Kamble, Prakash Kotambe, Santosh Panchal, Dadarao Kotambe, Balaji Kamble, Amol Shinde, Govind Aerekar, Keshav Kamble, Suraj Kamble and Datta Bhalerao. The four women who named the victims for practicing black magic while allegedly in possession of spirits have been admitted at psychiatric ward in GMCH Chandrapur. These women could be arrested on discharge, sources said.

SP Arvind Salve also visited the village. A team of Andhshraddha Nirmulan Samiti headed by Anil Dahegaonkar visited the village and held a meeting to create awareness on Monday. People were enlightened about superstitions and explained there was no black magic or spirit possession. “Some people have hallucinations and delusions, go into trance-like condition, which people feel is possession by spirit or goddess. Hence, whatever they say during this trance is considered the words of spirit or goddess,” explained Dahegaonkar.

He explained the spirit-possessed women naming Kambles and Hukes on Muharram created mass hysteria. “Even while we were holding awareness meeting, these women went into trance. We have strongly recommended their psychiatric treatment,” he said.

Dahegaonkar underlined the need for strong awareness among people and demanded that the government, which has passed a law in this regard, should take the initiative to create awareness after such incidents.