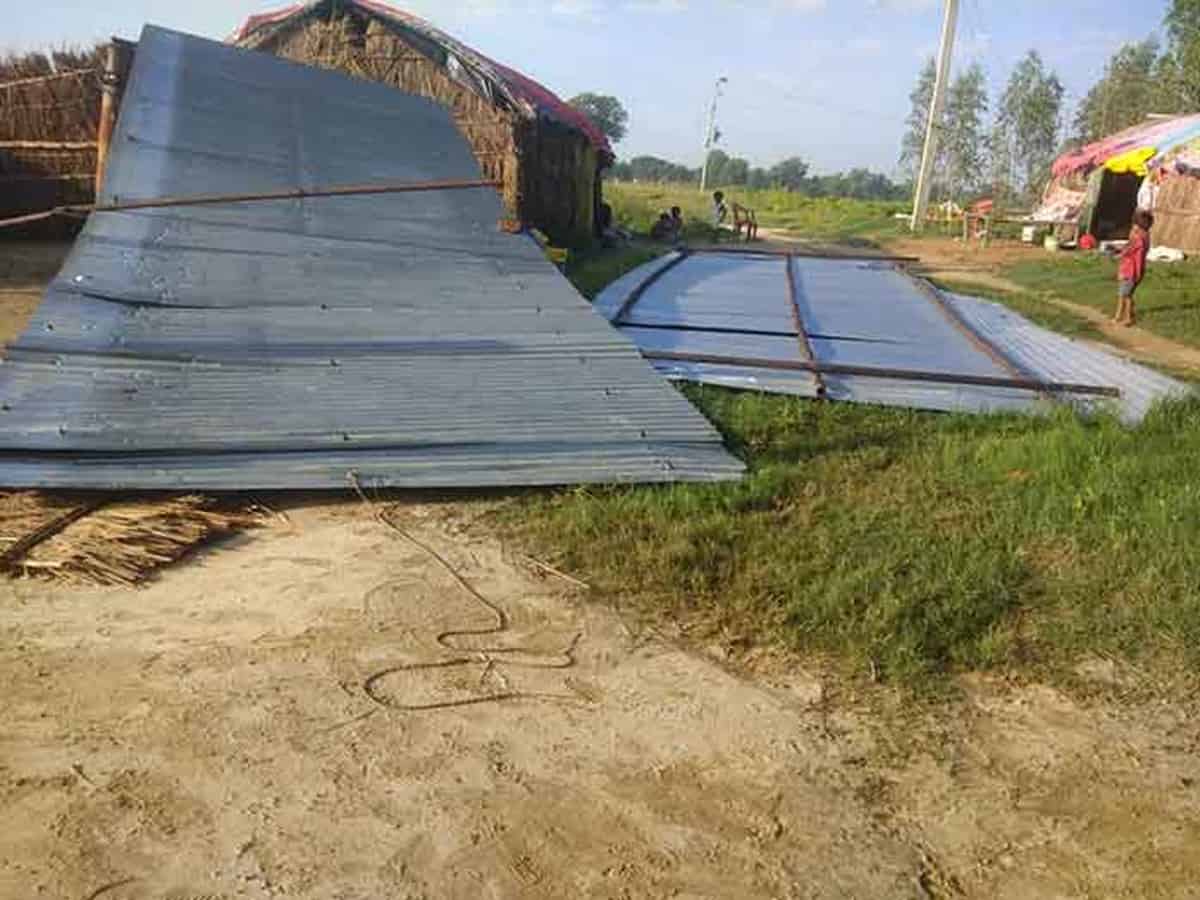 A Church at a village in the Indian state of Uttar Pradesh was completely demolished by religious fanatics at midnight on the 25th of August 2020. The tin roof and fortifications made of bamboo cane were broken down and ruined during the incident.

*Pr. Purohit who leads the Church in this village told Persecution Relief that he received the startling call at 12:30am from *Deepak- a believer who lives not far away from the Church building, informing him about the unfortunate attack.

“On Sunday, the 23rd of August, we had a peaceful time of prayer and worship during the day with a few believers from the village at the Church. I left a little early as I had to drop my Wife and our baby to her mother’s place in Madhya Pradesh (another state in India)” said Pastor Purohit.

The Pastor said that this was a ‘shocking and unexpected attack’ as they have never faced opposition from the community. “I stay 10kms away from this village and travel twice a week to serve the Church there” he added.

“The Church is just around 50mts away from the main road. The other homes are further away. That may have been the reason why no one realized how and when the miscreants perfectly executed their plan” he explained.

Pr. Purohit began leading the Church at the village, around 5 years ago. He told Persecution Relief that although there were only a handful of Christians in the beginning, there are over 150 Christians living there now.

“Over the past few years, as the Church grew, a generous believer named *Harish gave us his land to build a Church, so that we could accommodate everyone during the prayer meetings” said the Pastor who also added that *Deepak-the boy who informed him about the attack, is Harish’s son.

“Many Christians contributed their hard-earned time and money towards the building of the Church. However, we are all saddened and disappointed after this incident” said Pr. Purohit.

In the first half of 2020, Persecution Relief recorded 17 cases of Churches being vandalized, destroyed or burned in spite of the Nation-wide lockdown being imposed from the 24th of March 2020. Since July, a few Churches have resorted to meet following strict protocol of the government. However, Church attacks are increasing.

Why must such attacks go unnoticed by the governing authorities? Doesn’t the Christian minority deserve to enjoy our constitutional rights just like citizens of other faith? Are we insignificant within our own nation, even after Christians have made distinguished contributions towards the building of this great country?

The situation in the Yogi Adityanath-run state of Uttar Pradesh is only deteriorating for the Christian minority, especially after the ground-breaking ceremony of the controversial Ram Temple. Recently, the religious nationalistic Vishwa Hindu Parishad group boldly declared on media platforms ‘We will not allow to build new Churches in Uttar Pradesh.’

Videos of such hate speeches go viral and dangerously influence and instigate the masses. These are the small damages being thoughtlessly made on the so called-world’s largest democracy, which will eventually lead to its painful divide, if not addressed immediately.

The US Commission on International Religious Freedom (USCIRF) has downgraded India to the lowest ranking, ‘Countries of Particular Concern’(CPC) In its 2020 report. The US State Department ranked India’s persecution severity at “Tier 2” along with Iraq and Afghanistan. Over the past seven years, India has risen from No. 31 to No. 10 on Open Doors’ World Watch List, ranking just behind Iran in persecution severity.