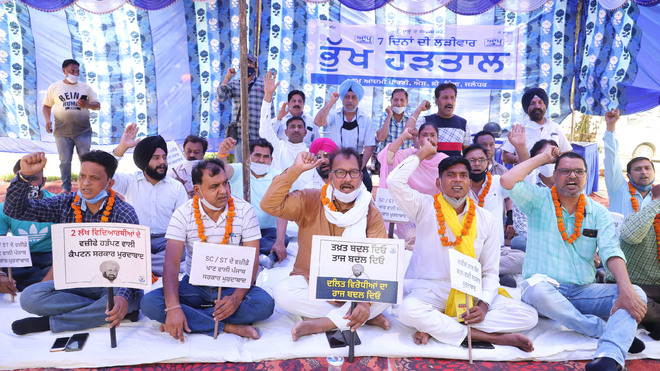 Jalandhar,  Coming in favour of over 2 lakh Dalit students across the state, who have been denied roll numbers by the colleges, who are awaiting the release of Post-Matric Scholarship Scheme funds, the local unit of the Aam Aadmi Party today started a seven-day chain fast.

The SC wing of the AAP sat on a dharna in front of the DC office raising their voice against Punjab CM Capt Amarinder Singh and SC Welfare Minister Sadhu Singh Dharamsot for not coming to the aid of the harassed Dalit students in the state.

SC wing district in charge Jalal Puri and vice-president Balwant Bhatia said the hunger strike had been started across the state to press upon the government to ensure that the Dalit students get their roll numbers well before the start of the examination.

Party leader Dr Shiv Dyal Mali said the colleges and the government was playing with the careers of the poor students by harassing them at all steps, including during admission, issuing or roll numbers and delivery of their degree certificates. He said that the Congress had come to power assuring the SCs with all sorts of poll promises but had failed to even give them their right to education.

70 get roll numbers just a day before exam

On the sidelines of the protest by AAP, the Student Sangharsh Morcha led by Deepak Bali also organised an agitation against the government in the office of Deputy Commissioner

Bali said that as many as 70 Dalit students, who were to appear in examination to be conducted on Wednesday by IKGPTU, got the roll numbers at 4 pm.

Himself a student of MA political science at Lyallpur Khalsa College, Bali said: “Ours is a completely non-political forum. All parties including Congress, SAD and AAP are just engaged in political stunts over the issue as elections are drawing near. So we are not joining any of them in our ongoing campaign”.