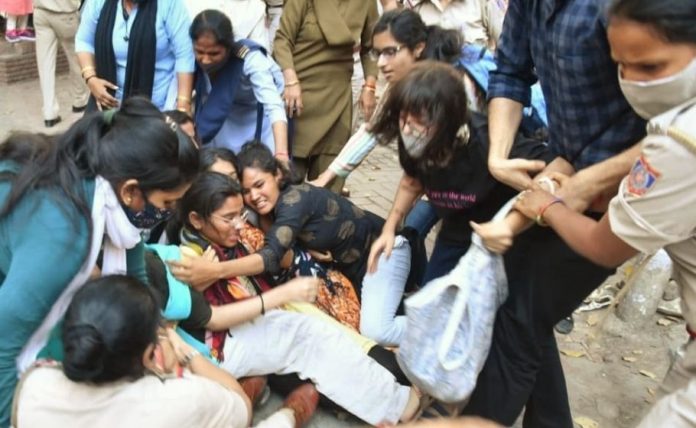 The International Women’s Day celebration at the Art Faculty of Delhi University (DU) turned ugly after the activists of Bhagat Singh Chatra Manch (BSCM) and clashed here on Monday.

The BSCM held a programme named “Listen to the voices of women who faced the brutality of Brahmanical Hindutva Fascist regime” on Monday for which they had invited Dalit activist Nodeep Kaur, her sister Rajveer Kaur and the family members of a few rape victims, including the Gurmandi and Butana cases.

However, even before Nodeep could address, the ABVP supporters led by Delhi University Students Union (DUSU) joint secretary Shivangi Kharwal stopped the proceedings, asking whether the organisers had valid permission to hold such an event.

“The peaceful gathering in accordance with International Women’s Day by the BSCM was attacked by ABVP along with Delhi Police. When Rajveer Kaur was giving her speech, ABVP tore the posters and the police just stood silently,” Sangeeta told The Federal.

“They didn’t allow Nodeep Kaur to give her speech and attacked other speakers as well as the students. They kept demanding our ID cards and abused us. They labelled the students as urban Naxals and anti-nationals. The security guards too tore our posters along with the ABVP members,” she said.

She further alleged that she was manhandled by the police and that they tore her clothes. “Other students were also manhandled. Nodeep Kaur was dragged and manhandled. Delhi Police also misbehaved with DU professor Nandita Narain. This sort of violence happened in the DU campus when SHO Maurice Nagar and SCP were present on the site,” she added.

“Ravinder from BSCM along with Anil, Varkkey, and Praveen from the Students Federation of India (SFI) was detained by the police while ABVP, who were abusing women and hitting them, were set free. The activists were released after we surrounded Maurice Nagar Police Station,” said Sangeeta.

“The police as well as the ABVP are the agents of the state where Brahmanical patriarchy runs through its spines. The state itself is afraid of the voices of women and their agents unleashing violence over women’s day gathering. When we try to reclaim our spaces challenging the Brahmanical Hindutva state through the path shown by the women fighters fighting the fascist regimes, there is nothing but violence,” Sangeeta expressed.

ABVP, however, claimed that the clash was started by the organisers. “The DUSU was organising a self-defence clinic today. And these people, majority of whom were outsiders, were holding a meet outside the Conference Centre of Arts Faculty,” ABVP State Secretary Siddharth Yadav told the media.

“DUSU joint secretary Shivangi and a few others objected to a few posters showing our forces in a bad light. On finding that these people had no permission to hold the event, an argument happened. Someone grabbed her chunni and a scuffle ensued,” he explained.

After the incident, DUSU joint secretary Shivangi Kharwal filed a complaint at the Maurice Nagar Police station against the BSCM.

In her social media post, she said, “Filed an official complaint with Delhi Police regarding anti-national programme held in the premises of Delhi University defaming our nation and calling Indian Army rapists. The complaint also includes assault and manhandling of me by unidentified people in the programme.”

Vasu Kukreja told The Federal, “The program includes speeches about custodial rapes of Dalit women by the police. This was going on for some time. This is the truth and no one can deny that. We along with Nodeep and Rajveer Kaur are thinking of filing a complaint after having a discussion.”