Caste wars in Bhojpur are a reality of the past. However, Dalits of the region feel although the feudal economy has weakened over time, not much has changed in terms of the feudal mindset. 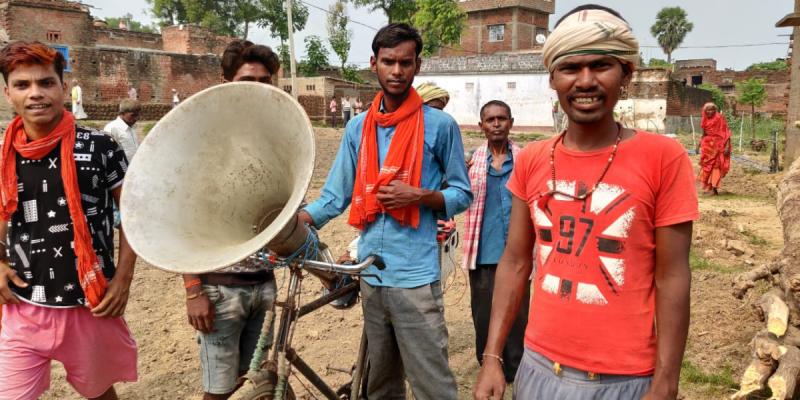 Arrah (Bihar): Musahars of the Agiaon constituency still remember those dark years in the late 1980s and 1990s when Ranveer Sena, a private militia formed by the landed Bhumihar caste group, killed hundreds of them in a series of horrific massacres that shocked the nation. The Dalit killings in Bathani Tola (1996), Laxmanpur Bathe (1996) and Shakarbigha (1999) are recalled with a sense of dread.

A reserved seat in Bhojpur district of central Bihar, Agiaon is home to many Dalit communities, like the Musahars, who have had to bear the brunt of ‘upper’-caste anger, and the subsequent planned backlashes, for demanding basic minimum dignity.

“We were not allowed to wear slippers in front of the landlord. We couldn’t sit on the khatiya (cot). Our daughters were required to visit a Bhumihar household the night before her marriage. We wanted these samantwadi (feudal) practices to stop. We wanted our daily wages to be raised from Rs 5 to Rs 7. In return, we were killed,” he reminded this correspondent.

Such was the influence of Bhumihars and Rajputs — the landed communities — that even the state apparatus either supported their feudal domination or was too scared to rub them the wrong way.

Naarhi village, too, witnessed one of the worst massacres in Bhojpur. At the martyr’s memorial which has names of seven Dalits imprinted on it, Ram explained, “We had a rally in Patna that day. The year was 1994. All of us were attached to the communist movement, which fully supported and fought for our dignity. As we took out our march from the village, the police gheraoed us from all sides. When we protested, the forces started firing. Our seven brothers were killed, while around five were severely injured.”

This memorial in Naarhi village is a testament to the worst massacre perpetrated by the feudal lords that had killed many Dalits. Photo: Ajoy Ashirwad Mahaprashasta.

“Hum chup nahin baithe. Humne bhi samay samay par jawaab diya (We didn’t remain silent. We too responded from time to time),” said another villager in the Ravidas tola about how at the time, they responded militantly to such oppression.

The days of caste wars are over in Bhojpur now. A large section of landed communities have been diversifying their businesses, moving out of the villages to establish themselves in cities, and consciously losing their dependence on the feudal economy. Much of that can be credited to the organised communist movement led by Dalits of the region.

But Dalits say that the feudal economy may have weakened, but not so much its practices.

A Communist Party of India (ML-Liberation) worker told The Wire that stray incidents have replaced organised violence in the area. “Earlier this year, a Kahar (EBC) man was killed by an ‘upper’-caste family. He had taken a loan of Rs 15,000 which he repaid from time to time. But the lender family imposed an interest of Rs 85,000 on him. When he couldn’t repay, the lender came to his house with his son and wife, locked his child and wife in a room, and killed the person. The family is in jail today.”

He recalled another incident when last year a Dalit shopkeeper was killed by a Bhumihar person. “He had almost shut his shop in the evening when a landlord of the area came to buy eggs. When he said that he had already closed the counter, the landlord shot him.”

Rising aspirations and the evolution of the Communist movement

Although caste polarisation still exists on the ground, Dalits now expect an improvement in the quality of their lives. “We want regular work. We want shiksha (education) for our children. We hope the government installs good dispensaries here,” said Basanti Devi in the Musahar tola of Baddhiyan village.

“Most of the development funds are being utilised in the colonies of Babu Sahebs (colloquial term to refer to Rajputs). They have roads, drains, piped water, but nothing is done in our colonies. I have requested the block development officers multiple times to get some work in our area too. But he has only been reticent about it,” said a Muslim woman, who is also a ward member of Chaandi village, where Manzil had come canvassing. Muslims, Yadavs and Paswans, a Dalit community, stay in the same area of the village.

The CPI (ML-Liberation) which started out as an underground communist party in the 1970s but joined mainstream parliamentary politics since the late 1980s has responded to these aspirations. Over a period of time, it has evolved from a strictly land-based struggle to one with a broad-based agenda. 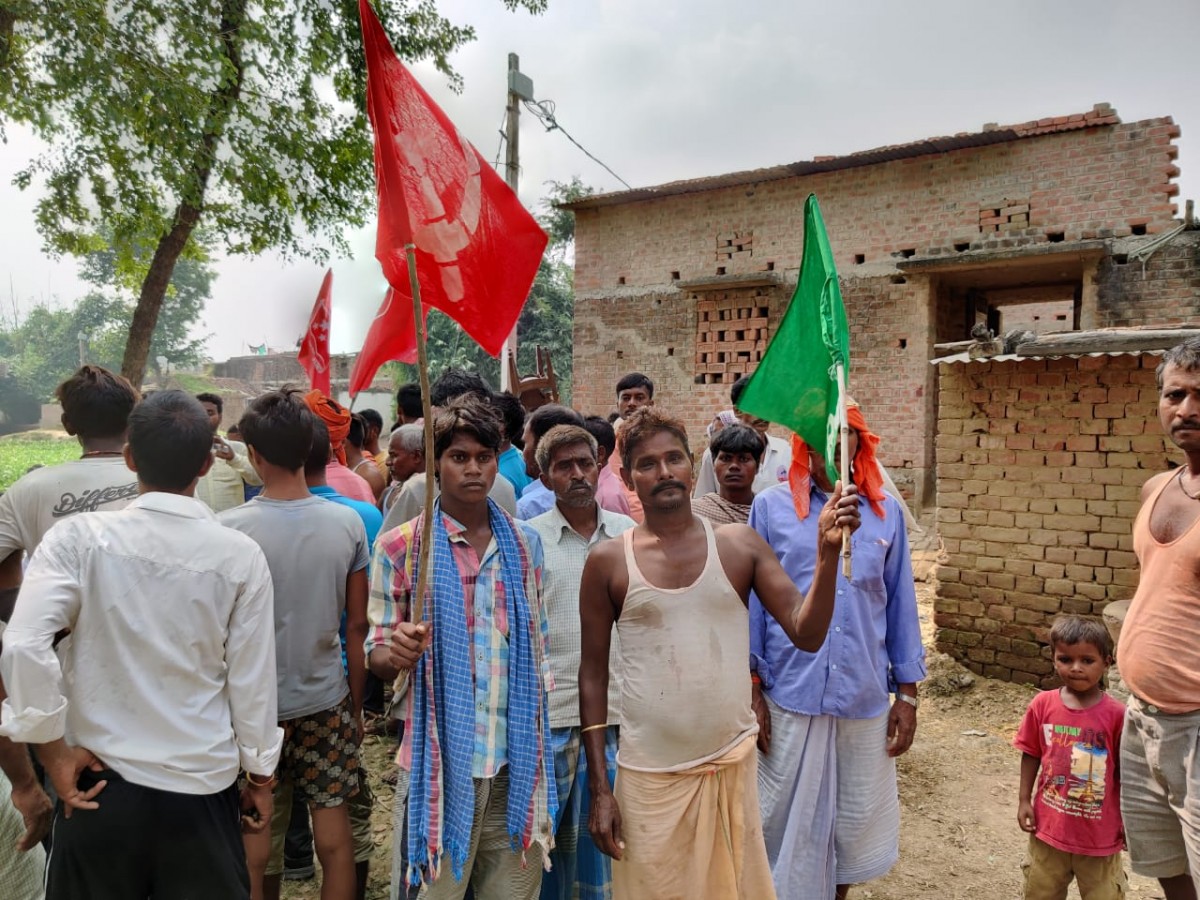 From land struggle, the CPI (ML-Liberation) has evolved into a force to reckon with a broad-based agenda in tune with the aspirations of Dalits. Photo: Ajoy Ashirwad Mahaprashasta.

In Agiaon, CPI (ML-Liberation) candidate Manoj Manzil is contesting from the Mahagathbandhan or the Rashtriya Janata Dal-led opposition alliance. He polled around 32,000 votes in the 2015 elections to finish third after Janata Dal (U)’s Prabhunath Prasad and BJP’s Shivesh Kumar. JD(U) had allied with the RJD in the last elections. In the 2019 general elections, Agiaon in the Arrah parliamentary constituency was one of the two assembly seats in Bihar to beat the Modi wave. CPI (ML-Liberation) candidate Raju Yadav, who got the support of RJD, polled more votes here than the BJP’s candidate who eventually won the seat. 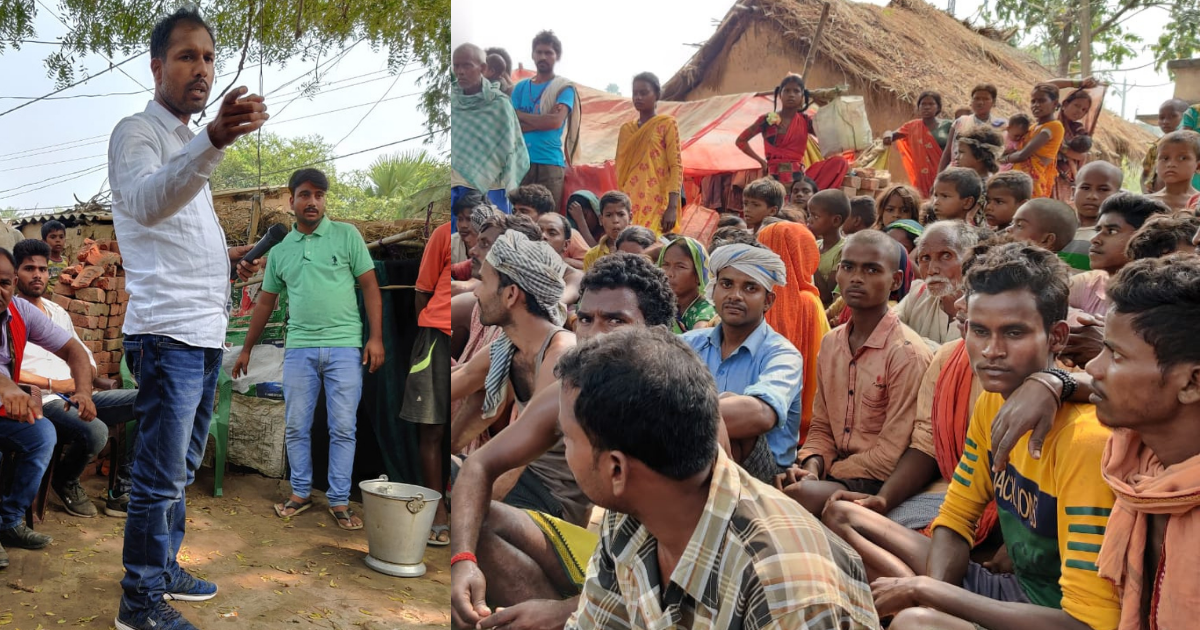 Over the years, Manzil, who started out as a Leftist student activist in Arrah, has been expanding his party’s base by leading multiple struggles with the Dalits and OBC communities on issues of development.

Said his party’s central committee member Ravi Rai, “Over the years, Manoj has picked up issues of development, and led struggles on multiple fronts. He has been protesting against illegal sand mining; he put pressure on the administration to electricity to Dalit colonies, and also led a vibrant movement to ensure that ration cards are given to all. At the same time, his movement of sadak par school in which he organised around nine schools on roads to protest against the failing education infrastructure in the area. He also organised the Nahar mein paani (water in the canals) agitation to demand that excessive siltation in the canals which had impeded water flow should be removed.” 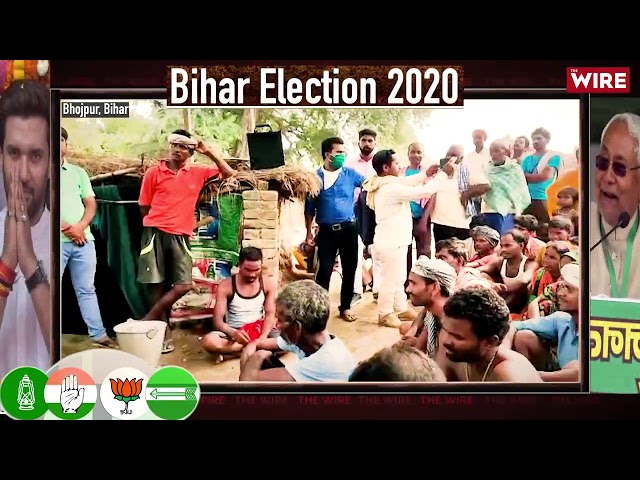 Manzil himself felt that it was time to pick up issues of the poor in general.

“If I demand ration cards for all, or put pressure on the government to ramp up education and irrigation facilities, every section of society will benefit. Many upper caste teachers and villagers who genuinely want such social development and are ready to abandon their casteist superiority have been supporting me.”

“If we agitate against the farm bills, then the small and middle farmers of the area will also benefit. The APMC act was abolished in Bihar by Nitish Kumar in 2006. Since then, farmers of the state, irrespective of their caste, have been selling their paddy and wheat at prices much lower than the minimum support price (MSP),” he said.

“We have not abandoned our core issues and people. But given the contemporary political context and rising inequality in India because of market-driven reforms, we have also taken up new issues,” Rai said.

“Dignity with development” is the new call for the party. As a result, most OBC communities, including those who are in the economically backward classes (EBC), have wholeheartedly come to support Manzil. “Inhi ko jaantey hai. Hum toh teen taara mein hi denge. Bihar mein kya hoga yeh hum nahin jaantey magar Manzil raat viraat jab bhi bulao, aa jaata hai aur hamare liye ladta hai (We know only Manzil. We don’t know what will happen in the Bihar elections. We will vote for three stars (CPI-ML’s election symbol). He is just a call away, irrespective of the time of the day,” said a Kumhar community member of Chaandi.

Yadavs and Kahars of some of the villages in Agiaon seat also echoed the same sentiment.

Yet, most upper caste groups look at the party with great suspicion. “BJP hamari party hai. Wohi hamare zarooraton ka khayal rakhti hai. Yeh party (CPI-ML) toh hamesha unhi (Musahars) ke saath rahti hai. Dekha nahin aapne, woh milne bhi nahin aaya. Wahan aaya aur wohi se chala gaya (BJP is our party. Only the BJP takes care of our needs. CPI-ML only stays with the Musahars. Didn’t you see Manzil didn’t even come to even meet us? He came to the Musahar tola and left from there),” said a middle-aged man, who belonged to the Rajput community and owns less than an acre of land in Baddhiyan village, where Manzil had finished campaigning just minutes ago.

He said his support will be for the Chirag Paswan-led Lok Janshakti Party’s candidate Rajeshwar Paswan, since “Prabhunath Prasad, the sitting JD (U)) MLA, didn’t even visit the village even once in the last five years.”

“Kaam toh door ki baat hai, kam se kam milne toh aana chahiye tha na (Work is a distant dream but he should have at least come to meet us,” another Rajput elderly man said when asked about whether Prasad did any work as an MLA.