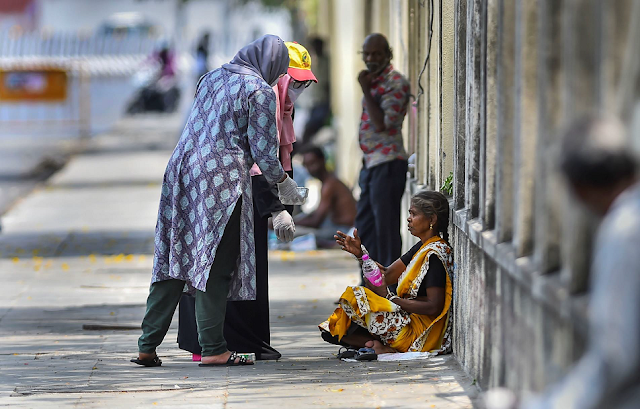 By Rajiv Shah
An authoritative survey, carried out by a group of academics and social workers, among low-income settlements in Ahmedabad during the Narendra Modi-announced Covid-19 lockdown, has said a whopping 37% of the households did not receive any free ration from the government. Of those who did receive ration (59% households), Dalits or scheduled caste (SC) and minority communities were found to be at the receiving end.
Carried out among 759 households, the survey was carried out to ascertain whether the Central and state government schemes announced for free ration from the public distribution system (PDS) for April, May and June to all the needy – including Antyodaya, below and above poverty live ration card holders, as well as non-ration cardholders – was made available.
The survey covered 759 households in 64 slums and low-income localities, spread over 29 of the total 48 wards of the city, 32 % of whom were upper caste Hindus, 35% Muslims, 9% were other backward class (OBC), 18% were SCs and 5% scheduled tribes (STs). The average household size of sampled households was 5.11.
Titled “Access to Relief Entitlements and Implementation of Central Government Directives”, the survey report says, “The mean number of days for which free ration was received from the government was lowest among the SC community (15 days), followed by Muslims (16 days), OBCs (18 days), and Hindu upper-caste (20 days).” 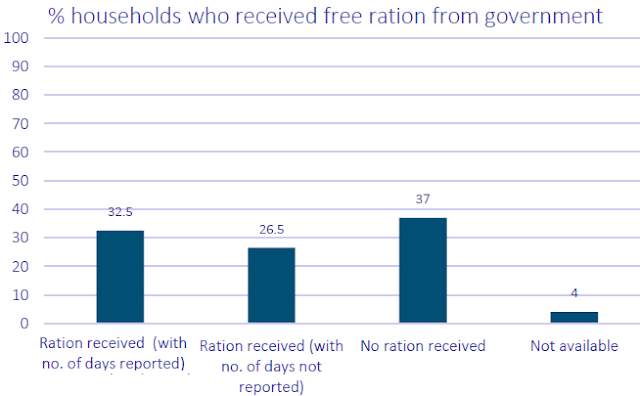 Prepared under the banner of the Citizens for Shelter and Housing Alliance (CISHAA), the report has been authored by Prof Darshini Mahadevia and Dr Renu Desai, urban planning experts with the Ahmedabad University and the CEPT University, respectively, with the help of the city-based civil society organizations (CSOs) Saath Charitable Trust, Centre for Development, Mahila Housing Trust, Prayas Centre for Labour Research and Action, and the Human Development Resource Centre.

The survey found that 567 households of the 759 surveyed households, that is 74.7 %, had ration cards. Of the 192 or 25.3% households who did not have ration cards, 61 (31%) were tenants, while the remaining 131 (69%) were non-tenants. The latter “included households who owned their house, households who had been resettled in economically weaker section (EWS) housing but were not yet owners of the house, households living in kutcha shacks on footpaths or government land.”
Suspecting that many of those who did not have ration cards were migrant workers, the report says, “Of the 567 households having ration card, 22.8% (129 households) had not received any free ration from the government; 18.7 % were from the APL category, 3.9 % were from the BPL category and 0.2 % were from Antyodaya (poorest of the poor) category.”
The reasons for almost one-fourth of the households with ration card not getting free ration included “the confusion regarding whether APL card holders were to be given free ration”. Even though APL cardholders without the National Food Security Act (NFSA) stamp on their ration card were eligible for free ration, “in some areas the ration shop owners gave free ration only to APL cardholders who had the NFSA stamp.”
Other reasons for not getting ration included “ration shops in certain areas remaining open for very less time during the lockdown, making it difficult for all to get free ration; ration shops getting inadequate quota from the central public distribution system (PDS) supply”; and “ration shop owners selling “ration to people on the black market, revealing that corruption played a role in denying food relief entitlements.”

The report underlines, despite the Gujarat government’s Anna Brahma Yojana which was supposed to give food relief through PDS to non-ration cardholders such as migrants, destitute, etc., “Of the 192 households without ration card, 79.7% (153 households) did not receive any free ration from the government.”
Then there was another difficulty. “The government had engaged the government school teachers to fill forms of those without ration card, and people were to be given free ration based on this identification process. However, each school was given only 100 forms for their teachers to fill, and therefore if there were more than this number of non-ration cardholders, then they got left out of the identification and were therefore denied free ration.”
Coming to other government schemes announced for the lockdown, the report notes, a whopping 85% of the households reported that pregnant women “did not receive any nutritious food during the lockdown”, adding, among them “the Muslim households fared the worst.” However, as for children, which were to be provided food by anganwadis. only 15% households reported they “did receive some food from the anganwadi in their area.”
Despite the government announcement that there would be direct cash transfers to the poorer households, 284 of the total 759 surveyed households (37.4%) “either had no Jan Dhan account or had a dormant account”, while “25.2% had a Jan Dhan account and received a cash transfer while 17.9% had a Jan Dhan account but had either not received a cash transfer or did not know if they received a cash transfer.”
Of the 184 households who did receive a cash transfer, 151 reported receiving Rs 500 (first instalment) while remaining 33 households reported receiving Rs 1,000, the survey says, though adding, it is quite possible that several of the households may have received cash after the main survey work ended (May 17), though many said, they did not know of the second instalment as they could not go to their bank. 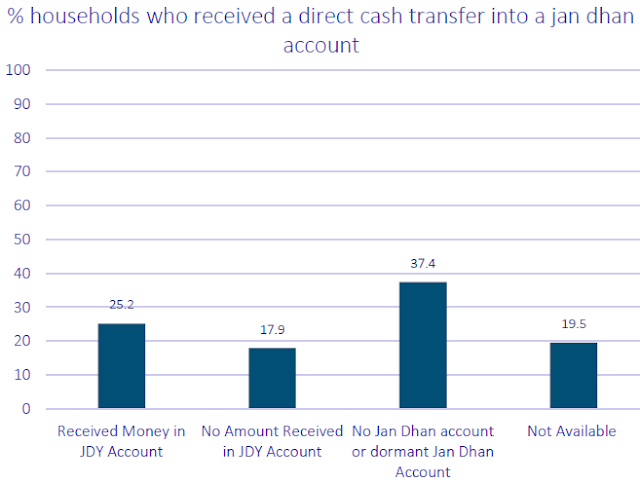 Given this overall framework, the survey report says, several CSOs and citizen groups carried out relief work in the lockdown period. Thus, as many as “278 households of the total 759 surveyed households, that is 36.6%, reported receiving ration from a social organisation”, adding, “The mean number of days for which ration was received from social organisations was only 13 days.”