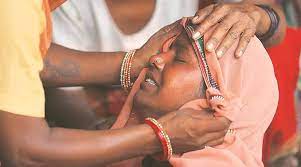 Amroha News: The family members of a Dalit girl living in the Thana countryside area of ​​Amroha, Uttar Pradesh have accused a youth of another community of kidnapping.

Amroha News: The family members of a Dalit girl living in the Thana countryside area of ​​Amroha, Uttar Pradesh have accused a youth of another community of kidnapping. The relatives say that they are constantly making rounds of the office of the Superintendent of Police but no hearing is being done. The Dalit family has warned of migration due to lack of action. He has said that we are in danger of our life and property from the people of other communities. The relatives who reached the Superintendent of Police’s office have demanded action.

Let us inform that a Dalit girl resident of 1 village under Amroha Dehat police station area of ​​Amroha district was abducted 8 days ago by a youth of another community from the same village by showing a firearm after entering the house, after which the family recovered her. Regarding the demand, the police have been making rounds of the administration. But till now the daughter has not been recovered and the clue of the kidnapper has not been found. Now this Dalit family is facing the threat of life and property in this case and now they have given a warning of migration after getting angry due to the lack of action against the accused of kidnapping. He has said that when we are not getting justice in this government, then what will we do by staying in this village.

In this case, Police Officer Vijay Rana said that after registering a case, the accused is being searched. As soon as the search for the accused is completed, action will be taken against him.

Note: This news piece was originally published in abplive.com and used purely for non-profit/non-commercial purposes exclusively for Human Rights objectives.