In 2007, 11 Adivasi women were allegedly raped by the elite anti-Naxal police force in Andhra Pradesh, the Greyhounds, at gun-point. 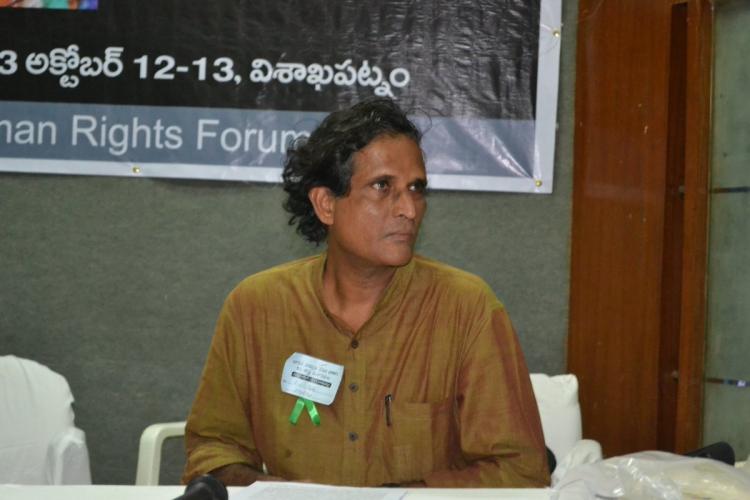 VS Krishna, a prominent human rights activist, has been fighting for 11 Adivasi women, who were allegedly raped by the elite anti-Naxal police force in Andhra Pradesh — the Greyhounds — at gun-point. After more than a decade since the incident, Krishna has been booked under the draconian Unlawful Activities (Prevention) Act (UAPA), Sedition, Arms Act and several other charges by the state police. The Visakhapatnam rural police have accused Krishna of being a Maoist and coercing the rape survivors into “falsely testifying” against the Greyhounds personnel.

In the Vakapalli rape incident, which took place in 2007, 13 Greyhounds personnel raided the Vakapalli hamlet, a tribal agency area under Nurmati panchayat in Visakhapatnam, and allegedly raped 11 Adivasi women belonging to the Kondh tribe (categorised as Scheduled Tribe). Several civil rights activists, including Krishna, fought against the brutal repression of the police and fought for the justice of the rape survivors legally. The trial in the incident, which happened more than a decade ago, commenced in 2019 and is currently under trial in the SC/ST Special Court, Visakhapatnam. Two survivors had already died before the trial began.

Krishna was booked on Monday and Tuesday by two different police — Visakhapatnam rural police and Pidugurala police. He is the co-ordination committee member of Human Rights Forum (HRF), a civil liberties group in Andhra Pradesh and Telangana.

According to the FIR (first information report) registered by Visakhapatnam rural police on Monday, the police caught a person identified as Pangi Naganna, who was “suspiciously” travelling from Rudakota to Kumarada village in Munchingiputtu mandal of Visakhapatnam. Following his detention, Naganna allegedly confessed that he was working as a “courier” for the Maoists and acting as a bridge between the Maoist party and civil society organisations.

Naganna reportedly said that he facilitates meetings of Maoists with their “frontal organisations” in the name of “fact-finding.” In this alleged confession statement, Naganna testified against Krishna, saying that the latter and Akkiraju Haragopal alias Ramakrishna or RK — reportedly the Central Committee member of the Maoist party —  were in touch with each other and devised a plan to “put the police in trouble” and allegedly prevent them from combing the Maoist-affected villages.

As per the FIR, Naganna was part of one of the meetings in 2007, in which “though the police, who were in Vakapalli as part of delivering their duties, did not do anything wrong, Vakapalli Adivasi women were provoked to file complaints under rape charges to put the police in trouble by making them roam around courts.”

“I used to meet VS Krishna, a resident of Visakhapatnam. He met Maoist top leaders many times. About 10 months ago, I mediated a meeting between Krishna and RK. In my presence, they have discussed the false case that they filed using innocent Vakapalli Adivasi women. Krishna told RK that he has been roaming in the Adivasi areas encouraging the Adivasis to falsely testify against the police to prevent them from combing the area. If anybody is not willing to testify against the police, Krishna said that he ordered the Adivasis to leave the village,” read Naganna’s statement to the police.

It further added, “Krishna gave a document on the status report of Vakapalli case to RK and sought a further action plan from him. The women who showed interest in giving false testimonies were assembled in VS Krishna’s house in Visakhapatnam and they were influenced to give testimony against police.”

In the meeting, Krishna allegedly assured RK that “he would spread Maoist ideology in urban areas and would file writ petitions against the police under the veil of HRF.”

‘Vindictiveness of police against HRF’

Besides the case in Visakhapatnam rural police, in another case registered the very next day, on November 24 in Pidugurala police station, Krishna has been booked for “indulging in violent activities against the law” along with 26 others. On November 24, the Pidugurala police arrested a man identified as Kambhampati Chaitanya and allegedly seized revolutionary literature from him. Police said that all 27 of them mentioned in the FIR were part of the extremist ‘People’s War Group’, a banned communist party formed in Andhra Pradesh.’

In this case, 21 persons have been charged for their alleged association with the banned CPI (Maoist) party.

Refuting the accusations against Krishna and the other members who do fact-finding following “encounter” killings by police, HRF in a statement said that the cases against them were “clearly an exercise in intimidation to stifle lawful dissent and protest.” They dubbed the police charges “a litany of lies.”

“HRF, along with several other organisations, have provided them (survivors) with food and shelter to be able to depose in the trial. It is certainly not a crime to provide food and shelter to Adivasi women witnesses who have come from remote areas to depose in a criminal trial mandated by the law. It is because of this solidarity and sustained rights activism that the police are now seeking to intimidate VS Krishna in what we believe to be a clear case of vindictiveness. They have gone to the extent of invoking the Unlawful Activities (Prevention) Act, which is draconian legislation that mocks fundamental freedoms,” HRF said.

Rejecting the police accusation of being a Maoist front and demanding the charges against them be dropped, the group said, “HRF is not a surrogate or front of any political party. We were formed in 1998 with the firm conviction that a broad-based and truly independent human rights movement is desirable and possible. We believe that the essence of human rights is the notion of equality in human value and worth. HRF shall continue to work for the protection of constitutionally/internationally recognised rights of the people and for the right of the people to propose and strive for new rights that are not yet recognised in national or international law. We will continue to endeavour in spreading a human rights culture in society. We demand that the fabricated accusations in the FIRs be immediately dropped.”