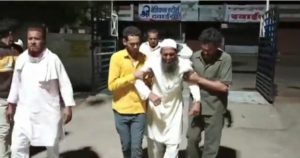 New Delhi: A 45-year-old Muslim vendor named Zahid Khan was assaulted and robbed of Rs 900 by two Hindutva fanatics for entering a Hindu-dominated village in Dewas district of Madhya Pradesh. The incident took place days after another Muslim vendor was beaten and looted for selling bangles in a Hindu area in the state’s Indore city.

Khan alleged that the men used religious slurs and attacked him with a belt and sticks.

“They were beating me, saying teri himmat kaise hui mere gaon me ghusne ki [how dare you enter our village] and stopped only after I fell unconscious upon the villagers’ intervention,” he said, according to the First Information Report. “They threatened to kill me if I entered the village again before leaving the spot,” he said while speaking to NewsClick.

He has been selling vegetables and other eatables in nearby villages on his bike to make a living for the past 15 years.

Khan was attacked in Borli village, under the jurisdiction of Hatpipliya police station, where two men approached him and asked him for his Aadhaar card.

The police said that after the hawker failed to show the identity proof, they assaulted him. Khan sustained minor injuries on his hands and legs. He said he could identify his attackers.

“Both are residents of Borli village and I have seen them in the village in the past,” Khan told the police.

The police have filed a case under sections 323 (voluntarily causing hurt), 294 (using obscene language) and 506 (criminal intimidation) of the Indian Penal Code.