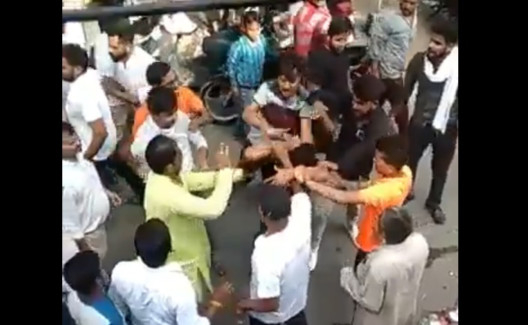 Bareilly: In yet another case of mob violence, a Muslim youth was dragged by his hair, beaten up, stomped on his neck and his legs were tied up to make him “confess” to theft in Bareilly area of the Indian state of Uttar Pradesh.

The incident took place on Tuesday afternoon at the bus station and a video of the incident later went viral on social media.

“We have taken suo motu cognizance and filed a complaint under sections 147 (rioting), 149 (offence committed by any member of an unlawful assembly, 323 (voluntarily causing hurt) and 342 (wrongful confinement) of the IPC (Indian Penal Code) against unidentified persons. Those who assaulted Sahil will be identified through videos and photographs,” he said.

According to reports, a passenger, Devendra Kumar, found that his phone was missing from his pocket while another man claimed that his wallet had been stolen. The by-standers began questioning those who were standing nearby and Mohammad Sahil, a 20-year-old labourer, fumbled when he was questioned. The mob immediately pounced on him and started assaulting him.

He was assaulted for nearly 30 minutes before police arrived. None of the stolen items were recovered from him. Sahil was taken to the hospital and later put in lock-up.

On the basis of Devendra Kumar’s complaint, an FIR was registered against an unidentified person.

This is the fourth such case in Bareilly since 2019. In August 2019, a mentally ill Muslim man slipped into a coma after he was assaulted by a mob on suspicion of cattle theft. He died in hospital. In September last year, an inebriated Muslim man was ‘mistaken for a thief’, tied to a tree and beaten up by a mob. He, too, died during treatment. In February this year, a Muslim taxi driver was accused of cattle theft and lynched. He died of head injuries. Web Desk