The reason why these songs have not found a more mainstream presence so far is because the field is dominated by upper castes, which is why the duo say they want to create this ‘Bookmobile’

Before Dr BR Ambedkar would get on the stage to give his speech, on many occasions, singers like Vamandada Kardak would grace the platform. They would sing on the strifes of the oppressed, the discrimination, their obstacle-filled journeys and about their wish for a casteless world, these music and lyrics would draw crowds. Ambedkar had then apparently said, “A hundred of my speeches are equal to just one song.”

Since then, thousands and thousands of songs have been written in praise of the work, life and ideas, ideals of the man, they all so fondly call ‘Babasaheb’. Over the last many decades, Ambedkarites especially in Maharashtra have created a staggering amount of work that has contributed massively to the anti-caste movement in the country. However, it is only now that this body of work is being documented. Documentary filmmaker Somnath Waghmare and Smita Urmila Rajmane, a  public intervention artist, performer and art education have come together to work on a project to digitise the long history of anti-caste songs and contemporary Ambedkarite Dalit resistance performances in Maharashtra. They are calling their project the Ambedkar Age Digital Bookmobile.

Somnath says that every town in Maharashtra has at least 2-3 singing groups and they include women. The duo will be travelling across Marathwada and Pune and meeting these Ambedkarite singers and will trace the history of the music. From singers who were Ambedkar’s contemporaries to the ones who emerged during his time, the two want to find the roots of the artform and how it branched out, “We want to record the works of people like Vamandada Kardak, Pralhad Shinde, Vitthal Umap and Annabhavu Sathe who are the pillars of Ambedkarite Dalit resistance songs,” he said. Somnath points out that music is a social movement which is why it is essential that we document the part that it had played in the larger movement against caste.

The reason why these songs have not found a more mainstream presence is because the field is dominated by people from the upper castes. So bringing these faces and voices into the mainstream is what Ambedkar Age Digital Bookmobile will do. The duo won the Foundation for Indian Contemporary Art Public Art Grant which will fund their project. It was picked from over 60 applications the Foundation received this year. In their statement, the Foundation said, “Keeping in mind the relevance and centrality of Ambedkarite discourse today, the jury felt the proposed engagement displayed a comprehensive framework for creating and sharing knowledge on and around histories of caste and resistance, untouchability and social reform in Maharashtra.” 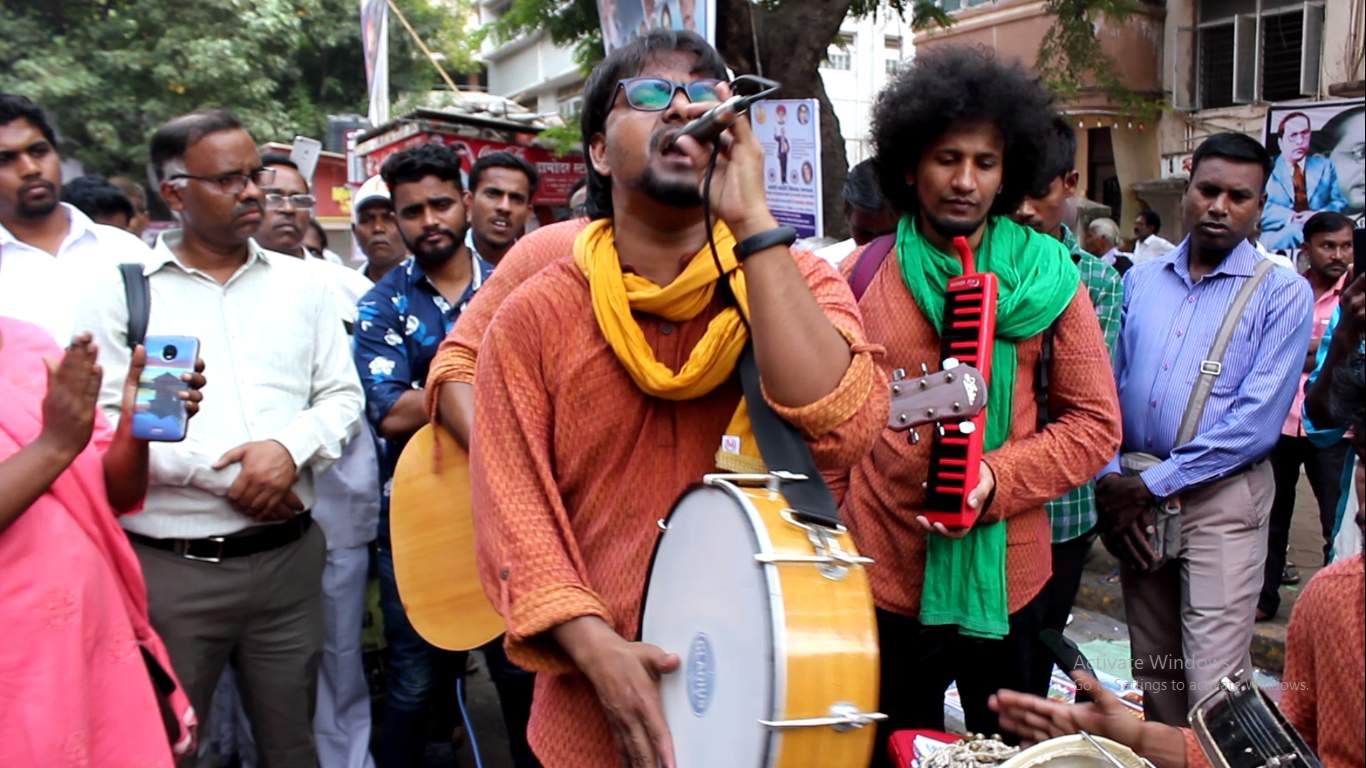 Somnath who hails from Malewadi, a small village in Sangli district in Maharashtra tells us that he has grown up with these songs. “I would see these singers in the shops, the bookshops, on the roads, at functions, towns, villages, slums, everywhere. I grew up hearing their songs and learning so much. We just see people in the media and academia who are at the forefront of caste discourse, but these people are greatly contributing to the movement as well but we don’t see them anywhere. They also don’t make money and are not doing well economically,” Somnath said. A lot of the singers have full-time jobs but despite this they make it a point to meet at least a couple of times a week to practise. These singers work as agricultural labourers, clerks, peons in small private companies. They perform outside the Buddha Vihar, on Ambedkar Jayanti, social reformist gatherings and some political functions too. But the singers barely make any money from their concerts and a lot of times, do it because they enjoy it and want to get the message across.

Kadubai Karat, is an example, Somnath says, “She’s a great singer but was struggling to make ends meet. One of her videos went viral on social media and people started to recognise her. Yet, her condition hasn’t improved much.” In an article in Mint, the singer is quoted saying, “You journalists come to us, write on us and our art and go back. You should also write about how our houses are being demolished by the government. I live in Aurangabad at Chilkal Thana Ghairaon, which is a barren land, in a tin house. A few months ago, at 5 am, police came and started demolishing our houses. There was no prior notice of any sort, or a general warning.”

Which is why Somnath and Smita, want to create a forum that will facilitate the singers to have some monetary benefit from their talent. The duo wants to document as many singing groups as possible and display their work on a website. The ‘digital bookmobile’ would be a portable multimedia archive with the potential to navigate spaces and distances with economy. The site would have clips of the performances, the history of the song, the contacts of the singers, so they would be invited to perform at events. They also want to organise an exhibition at some point showcasing the digitised work.

Somnath says that there are mainstream singers like Adarsh Shinde who do sing Ambedkarite songs and they do profit commercially from them. They sing on TV channels and concerts as well. But the singers in rural areas are largely ignored even though they have a stronger tie to the music, “When they are invited to perform, they just ask for travelling expenses. But they are the ones who have a strong foundation and understand the history and the relevance of the music.” The filmmaker says that this music even has a political connection, “Several political parties offer Maharashtra Legislative Council seats to the singers as well.” But Somnath wants to ensure he documents the people who scribble down lyrics in their small notebooks and bring about a revolution on stage.

Somnath says one his favourites is the song on the Battle of Koregaon, “Most people heard about Bhima Koregaon after the violence that broke out in 2018 but I’ve been hearing this song from 2011-2012. It’s a beautiful soulful narration of the way the people won that battle.” But there are too many to pick from, he adds. Somnath and Smita are already doing Facebook lives with the singers, so people are already getting a glimpse of the singers, “Some older people who have watched the FB lives were left weeping uncontrollably after watching the performances because they are stories of discrimination, oppression, abuse and the journey to creating a more equal world. So they feel very moved by the songs,” he tells us.

The documentation will not stop with the singers in Maharashtra though, Somnath plans to travel to Tamil Nadu, Gujarat and Karnataka and document singers there too, “Maharashtra has a very long history of anti-caste music but other states also have interesting stories. So I hope to travel to those cities and document their work.”