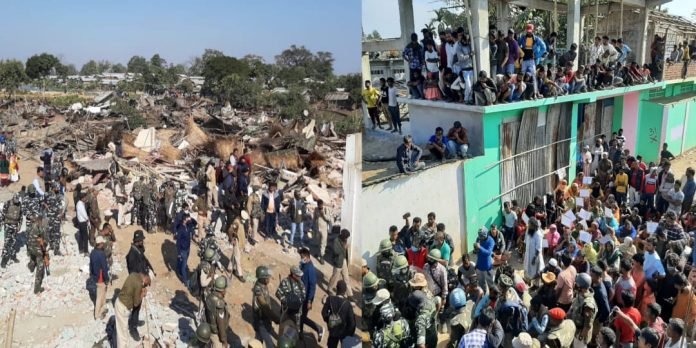 Majority of affected families belong to the Muslim community while some of them are from Naga community.

Violating a stay order issued by the Guwahati High Court, authorities carried out an eviction drive for the second time on Friday, 24 December, in Dudu Khan colony of Bokajan town in Assam’s Karbi Anglong district. Earlier, an eviction drive was carried in the same colony on Monday, 20 December.

Hundreds of families were left homeless as a result of these eviction drives, which were carried out by the Land Revenue department of Karbi Anglong Autonomous Council (KAAC) and assisted by police and district administration.

Authorities allege that various bighas of land have been occupied by illegal immigrants from Bangladesh. However, the evicted families have claimed they are Indian citizens and have legal documents to prove the same.

All Assam Minority Students Union’s district president Mazid Khan said that the local families have been living there since 1857 and they have documents dating back to 1910.

A madrassa was also demolished in violation of the stay order on 24 December.