The Dalit-Bahujans, who were involved in the ‘Mati Sankalp March’, were carrying a hundred and fifty meter long Buddhist Dhamma flag and tricolor with them. At the same time there were slogans of “common heritage and common martyrdom” on many banners. During this time people raised slogans of ‘Jai Kisan’ and ‘Jai Jawan’ along with the slogan ‘Jai Bhim’. Sushil Man is telling

JANUARY 18, 2021
The people of Dalit-Bahujan society have supported the ongoing farmer movement in Delhi. In this sequence, on March 17, 2021, on the anniversary of the martyrdom of Rohit Vemula, the Mati Sankalp March was organized by Bahujan Samajwadi Forum. The march reached from the statue of Baba Saheb Bhimrao Ambedkar at Dabur Chowk, Kaushambi in Ghaziabad district of Uttar Pradesh to the Ghazipur farmer dharna site.

Those involved in the march were carrying a hundred and fifty meter long Buddhist Dhamma Ghwaj and tricolor with them. At the same time there were slogans of “common heritage and common martyrdom” on many banners. During this time people were raising slogans of ‘Jai Kisan’ and ‘Jai Jawan’ with the slogan ‘Jai Bhim’. The specialty of this march was that it included women and children besides a large number of intellectuals and laborers. 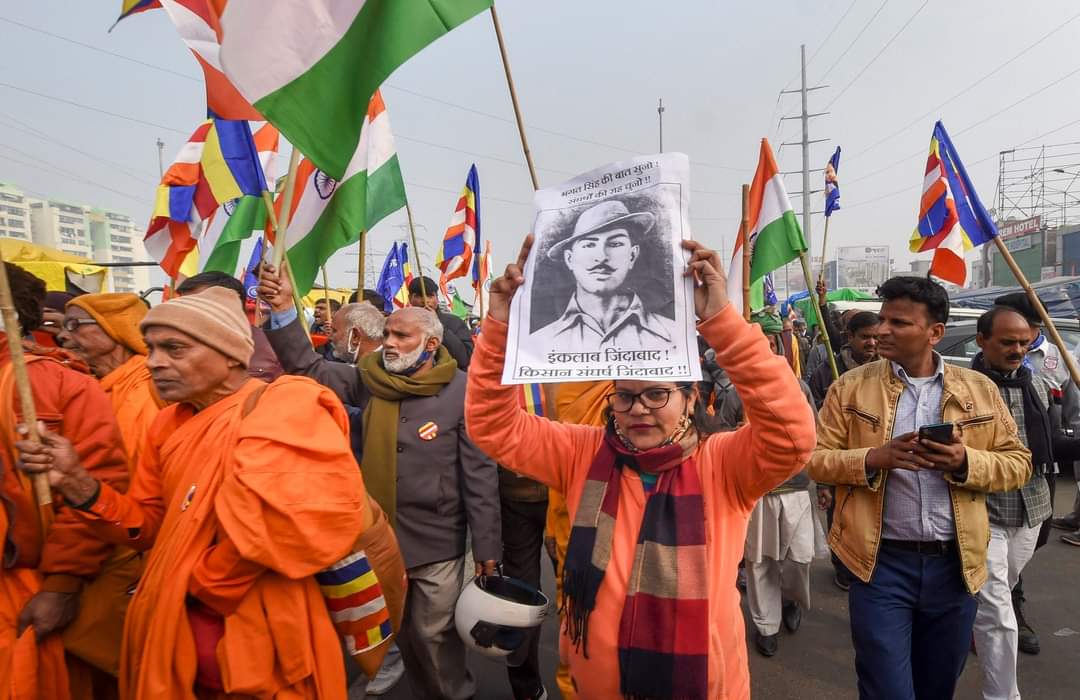 For the Mati Sankalp march, Bahujan Samaj people brought soil from 25 districts of four states (Uttar Pradesh, Uttarakhand, Delhi and Haryana) and on reaching the destination of March, this soil was dedicated to the farmers who were moving on the Ghazipur border. . The organizers of the event told the Forward Press that it was the intention of the Mati resolution that we people of 25 districts pledge the soil of our fields and barns that we fully support the Kisan movement and in the coming days the Bahujan society will be fully involved with the movement Will play

Founder member of Bahujan Samajwadi Manch, Sanjeev Mathur said that Bahujan society is not looking at existing farmers movement by restricting it to farmers only. This is the beginning of a big fight and Bahujan society is ensuring its participation in this fight.

The Mati Sankalp March program was organized by many organizations including Bahujan Samajwadi Manch and Samajwadi Lok Manch. Dharmendra Pradhan, member and spokesperson of Samajwadi Lok Manch told that “Farmers are agitating for their legitimate demand. Being a social platform and animal, there is a good reason to support this movement that we support their rightful demand. ”

Describing the agricultural laws as anti-Dalit Bahujan, Dharmendra Pradhan further said that “These three agricultural laws are not just against the farmers. Most of the laws of this law are going to fall on the people of Dalit and Bahujan society marginalized for centuries. After these laws, the government system of public ration distribution system will gradually be finished. We expect that the government will drop all over the corporate government may onlyWill buy grain and hardly government will store grain. When the government does not have storage, where and how will it do the distribution. In that case, Dalit-Bahujan people who today get government rations from PDS shops will have to look towards the free market for food grains. Thus, it will have maximum impact on Bahujans. For these reasons also, we are opposing the agricultural laws and supporting the peasant movement. ”