New Delhi: The ruling NDA maintained a small but significant lead over the Tejashwi Yadav-led Opposition’s Mahagathbandan as the Bihar assembly election results were tallied through Tuesday. While counting of votes continued late into the night, the NDA managed to tide over the early surge the Grand Alliance registered.

In the Mahagathbandhan, the Congress weighed down the alliance while Rashtriya Janata Dal (RJD) had the highest votes for a single party.

Here are the updates:

1:15 am: Deputy Election Commissioner Chandrabhushan Kumar says counting in 20 constituencies is left, and adds that the exercise will likely be completed in an hour

11:59 pm: Prime Minister Narendra Modi tweets on Bihar election. Says the poor have delivered their verdict through the result. Every single voter has made their aspirations clear — that the new decade will be of Bihar and self-reliance will be its roadmap.

11:55 pm: Home Minister and former BJP president Amit Shah says party’s performance in the state is a victory of the dreams of every Bihari.

11:37 pm: Trends show that NDA surpasses the halfway mark of 122 seats and looks set to return to power, bucking the anti-incumbency wave

11:33 pm: Recounting of votes in some constituencies to continue overnight

11:30 pm: ‘Vote-cutter’ Chirag Paswan lives up to his name as his Lok Janshakti Party eats into the JD(U) votes in nearly 40 seats. Read the report by ThePrint’s Moushumi Das Gupta here

10:46 pm: BJP’s Bihar chief Sanjay Jaiswal tells PTI that NDA is set to form government in the state as it has won 121 seats and is leading in 4.

10:30 pm: In today’s Cut The Clutter, ThePrint’s Editor-in-Chief Shekhar Gupta looks at six key takeaways from the Bihar election — from the emergence of Tejashwi Yadav, Narendra Modi’s resilience, to the limitations of Congress as an ally and the rise of a new Left. Watch here:

10:17 pm: A final press conference could happen at midnight, EC says, adding that the poll body never works under pressure from anyone

10:16 pm: Results in 146 seats been declared as per ECI as of 10 pm, says EC secretary general. On RJD allegations that 119 of their candidates had already won, EC says the information on the official website is what is authentic

10:10 pm: Ashish Kundra, deputy election commissioner, refutes allegations of any impropriety in counting of votes, and adds that ballots are being verified according to their guidelines

10:05 pm: Election Commission begins addressing a press conference on the counting of Bihar assembly election votes. This is the third presser the election body has held today

9:30 pm: 137 seats yet to be declared by the Election Commission. CNN-News18 reports that 92 per cent of votes have been counted, says NDA leads in 125 seats while Mahagathbandhan leads in 110

9:05 pm: Asaduddin Owaisi’s AIMIM leads in three of the five seats it has contested, while it has won two already. Speaking to reporters, Owaisi says, “It’s a great moment for us as people of Bihar have honoured us with so many votes. Our leaders & workers have put a lot of efforts into strengthening our party in Bihar. We will try our best to fulfil the promises made by us.”

8:40 pm: Of the Congress, which has won only 7 of the 70 seats it has contested, is dragging down the RJD-led Mahagathbandhan with its poor strike rate of 28%. ThePrint’s Fatima Khan reports. Read here

7:22 pm: While Bihar remains a nailbiter, the BJP consolidated its lead in bypolls that were held in 11 states, including Uttar Pradesh, Gujarat, Telangana, Manipur, Karnataka, and Madhya Pradesh. The party is ahead of rivals in 40 of 58 seats. Read here

5:52 pm: According to our real-time data, we are still ahead in 84 seats, tweets RJD

5:47 pm: Bihar is going to get its own government and nobody can stop it. I request Chief Minister whose exit is confirmed, to stop calling returning officers to slow down the counting of votes. He can only delay his defeat: news agency ANI quotes RJD MP Manoj Jha as saying

5:41pm: BJP has now won 4 seats, RJD and JD(U) have won 2 each, Congress and Vikassheel Insaan Party have won 1 each

5:24 pm: “We will have to wait till evening to get a clear picture,” says Congress spokesperson Shama Mohamed

5:05 pm: BJP workers gather at the party headquarters in Delhi

3:40 pm: RJD asks its candidates and counting agents to remain in the counting hall till all votes are tallied

3:20 pm: Trends indicate that LJP has hurt JD(U) in over two dozen seats. Chirag Paswan fielded candidates for 137 seats, of which 110 are being contested by JD(U)

CPI(ML) leads in 12 of the 19 seats it fielded candidates for, according to EC website. CPI(ML) is an alliance partner of the RJD-led Mahagathbandhan

Other parties — BSP, AIMIM and LJP lead in 2 seats each, while Independents lead in 4. 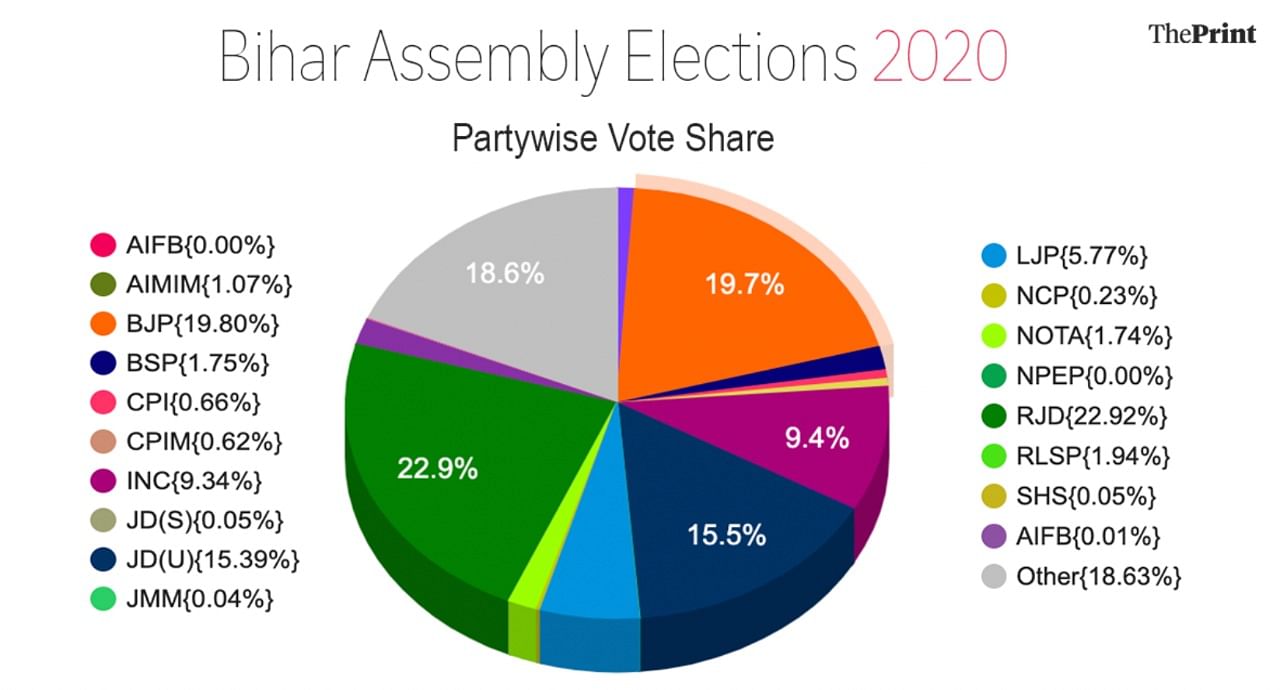 3:02 pm: Chandrika Rai, Tej Pratap Singh’s ex-father-in-law and one of the turncoats who left the RJD to join JD(U), trails behind Chhote Lal Ray in Parsa. Ray is contesting on a RJD ticket

2:57 pm: BJP’s B.L. Santhosh takes a dig at Congress, that is currently leading in 20 of the 70 seats it has contested in Bihar:

2:54 pm: JD(U)’s Poonam Devi Yadav is leading in Khagaria constituency, from where PM Narendra Modi launched the ‘Garib Kalyan Rojgar Abhiyaan’ in June to provide jobs to the hundreds of migrant workers who returned home during the nationwide lockdown

2:42 pm: RJD MP Manoj Jha claims “change is inevitable” and Mahagathbandhan is going to form the government. He says channels are not showing real time data, and that the RJD is leading in 86 seats

2:35pm: Veteran politician Sharad Yadav’s daughter Subhashini, who is contesting on a Congress ticket, is trailing from Bihariganj

2:23 pm: Former Bihar CM Jitan Ram Manjhi, who heads the HAM, is leading from Imamganj seat. Manjhi’s party rejoined the NDA a month before the elections

2:00 pm: Tejashwi Yadav’s gambit of allying with the Left, including the CPI, the CPM and the CPI (ML) has worked as the three Left parties are leading in 19 of the 29 seats they contested as part of the opposition alliance, early trends suggest

1:54 pm: Congress has been a drag on the opposition alliance in Bihar, with the party leading in just 20 out of the 70 seats it contested, trends suggest

1:53 pm: Trends show that the Lok Janshakti Party (LJP) has damaged Nitish Kumar’s JD(U) in over two dozen seats. Paswan had fielded candidates on 137 seats, 110 of which were being contested by the JD(U)

1:32 pm: We did not increase the number of counting tables because we need to have necessary infrastructure and security for counting. So we stuck to the traditional norm of 14 counting tables per round, Bihar state election commissioner says

1:17 pm: EC officials say there will be delay in counting due to increase in number of polling stations. Counting could go on till late tonight

1:04 pm: Congress candidate and Shatrughan Sinha’s son Luv Sinha says, “If the NDA can’t win by honest means, then they have no shame in doing whatever it takes to form the government.”

Former Bihar minister, the JD(U)’s Manju Varma, who had to resign over Muzaffarpur shelter home rape case, is trailing against RJD’s Raj Vanshi Mahto, in Begusarai, by over 6,000 votes

12:20 pm: Senior BJP leaders ThePrint spoke to say they are confident they will form the government in Bihar

12:05 pm: So far, 5 rounds of counting have been completed and 50 lakh votes counted. Twenty more rounds are still left

11:50 am: Who is Pushpam Priya Choudhary? The LSE alumnus is trailing behind BJP’s Nitin Navin in Bankipore. Read Revathi Krishnan’s report about the Plurals Party candidate contesting from Bankipore

11:30 am: AIMIM Bihar chief Akhtarul Iman is leading in Amour

11:19 am: Tej Pratap Yadav is now leading in Hasanpur constituency

11:06 am: Congress candidate Luv Sinha trailing in Bankipore, according to Election Commission trends

10:40 am: Nitish Kumar is eyeing a fourth term as Bihar chief minister. With the trends indicating a neck-and-neck contest, ThePrint’s Kairvy Grewal tells you who longest-serving Bihar CM has been

10:16 am: RJD’s Tej Pratap Yadav is trailing in Hasanpur

9:58 am: JD(U) leader K.C. Tyagi concedes defeat on TV, says we are losing due to the impact of Covid. Tyagi also says ‘Brand Nitish’ remains intact

09:41 am: RJD’s Tej Pratap is leading from Hasanpur in Samastipur district according to  initial trends. He’s pitted against JDU’s Raj Kumar and LJP’s Manish Kumar

09:35 am: Mahagathbandhan inches ahead of NDA, is leading in 101 seats

09:25 am: Rajendra Singh, who defected from the BJP to LJP, is leading from Dinara seat. 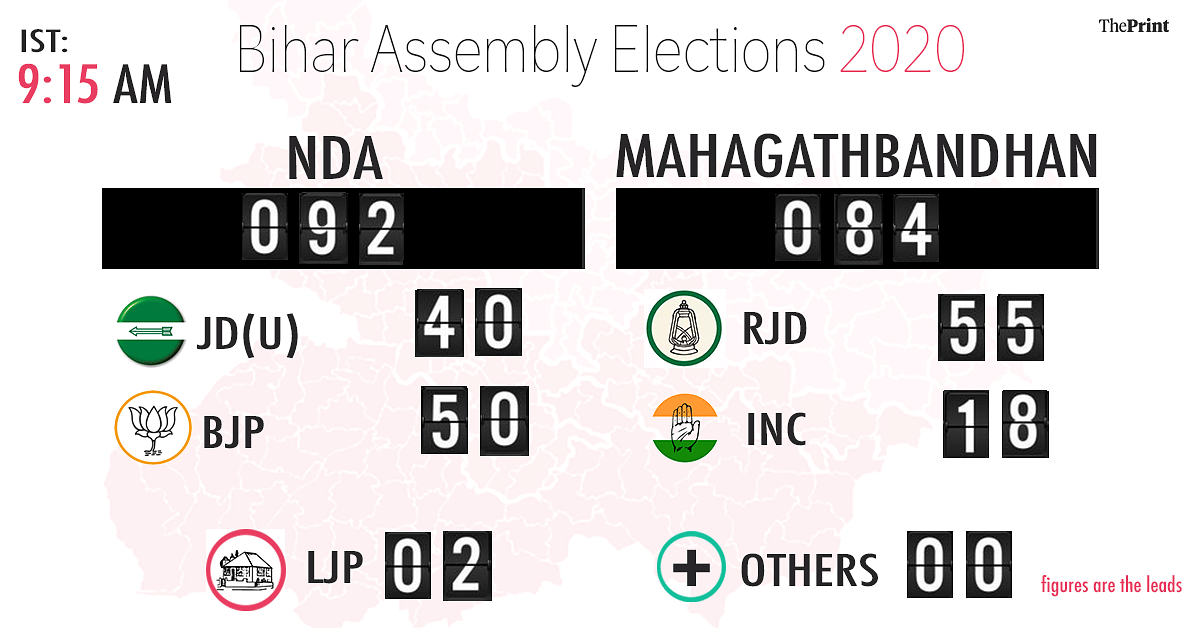 09:02 am: Shatrughan Sinha’s son Luv Sinha, who is fighting on a Congress ticket from Bankipore assembly seat in Patna, is leading in initial trend. Bankipore constituency is a BJP citadel

08:57 am: RJD leader Tejashwi Yadav’s supporters outside his residence

08:25 am: Counting of votes underway at Anugrah Narayan College in Patna

08:12 am: First leads in from Magadh, NDA leads in 2 seats, Mahagathbandhan in 1, reports CNN-News18

08:00am: Counting of votes begins across 55 centres in 38 districts

7:50am: Strong room established at Anugrah Narayan College being opened, as counting of votes for Bihar Assembly election begins shortly.

07:45 am: Chief Electoral Officer (CEO) Bihar, HR Srinivas said polling stations have increased by almost 45 per cent, so the declaration of Bihar results may take more time in comparison to pre-Covid era elections

07:35 am: The National Democratic Alliance (NDA) is hoping for a comeback even though a number of exit polls have given Bihar’s opposition coalition the lead to form the government. ThePrint’s Neelam Pandey reports: