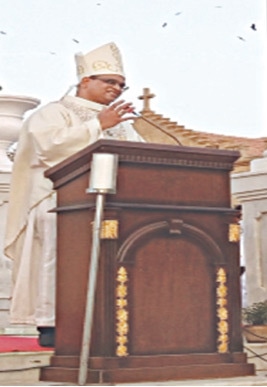 ARCHBISHOP Benny Mario Travas speaks at the mass.—Photo by writer

Amid prayers, hymns, scripture readings and the best of vibes from the Vatican to Karachi, the solemn procession of priests and pastors entered the ceremonial area, the monument in front of the Cathedral, for the introductory rites. This was followed by the elevation of the decree from the Pope, the reading of the apostolic mandate, the seating of the new bishop and the presentation of the pastoral staff.

It was back in February that Pope Francis had appointed Benny Mario Travas as the new archbishop-elect of Karachi. Earlier, in 2020, the Vatican had accepted the resignation of Cardinal Joseph Coutts of Karachi, who stepped down from the position on reaching the retirement age of 75. Archbishop Benny Mario Travas is the sixth bishop of Karachi.

Speaking at the mass, outgoing Bishop Cardinal Joseph Coutts, who will retain the position of cardinal as second in precedence only to the Pope, shared some of his memories of taking over as the bishop of Karachi in 2012.

“I came from Faisalabad to Karachi. I did all that I could to serve the people here and it was all thanks to the cooperation of the fathers, sisters and the other people here. I did not know the people here but found soon enough how willing they were to come forward to help. Any parish I would go to, I was treated like their own,” he said, adding that apart from sanctifying the people of God and teaching, a bishop’s responsibility also includes governance of the diocese. He hoped that the new bishop being from Karachi originally would fare better than him in this department as he already knew everyone here.

Archbishop Benny Mario Travas, who had been serving in Multan before coming to Karachi earlier this year, said that he had encountered several “wounds” in that city such as the low morale within the clergy and the falling standards of education in schools. “But, I hold teamwork in high esteem. Teamwork, forgiveness, treating more people with respect and equality, doing good to all, especially those who are against you, are some positive actions to heal our wounds and seek the mercy and love of Jesus,” he concluded.