The Indian Constitution grants social benefits and privileges to Hindu, Sikh and Buddhist Dalits for their uplift but denies them to Muslim and Christian Dalits. The August 10 “Black Day” protest by Indian Christians is against this discrimination. 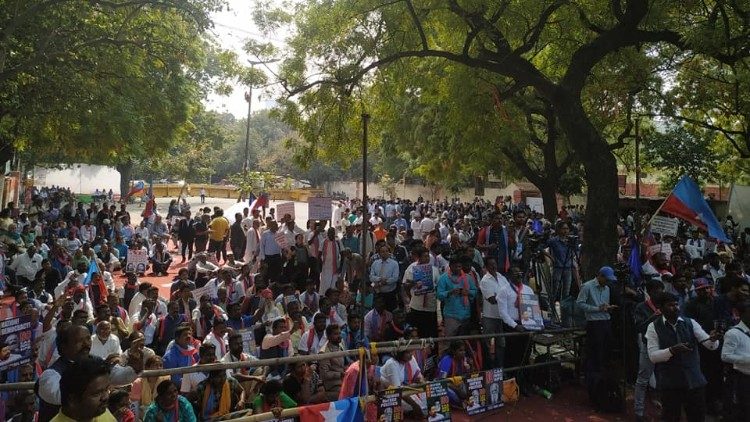 India’s Christians observed “Black Day” on Monday, reminding people that Dalits who embrace Christianity, have been facing a constitution-based discrimination.

The word “Dalit”, derived from Sanskrit, meaning “broken” or “downtrodden”, is a word used to signify former “untouchables, who are so low in ‎social status ‎that they are considered outcasts or outside the rigid caste system of Hindu society. As a result, through centuries, Dalits have been subjected to extreme exploitation, inhuman treatment, atrocities and poverty.

To ‎help their socio-economic uplift, the ‎Indian ‎Constitution reserves for them special privileges and benefits such as quota in government jobs and educational institutions.

However, the Constitution (Scheduled Caste) Order (Paragraph 3) that India’s first President Rajendra Prasad signed on August 10, 1950, initially stated that “…no person who professes a religion different from the Hindu religion shall be deemed to be a member of a Scheduled Caste.”

When Sikhs demanded these privileges, the Order was modified in 1956 to include them. The Buddhists too were granted the benefits in 1990. But Muslims and Christians of low caste origin continue to be excluded despite their demands.

The “Black Day” protest by Christian Dalits is against this Presidential Order of August 10, 1950.

Dalits form about 60 per cent of India’s Christian community, which makes up about 2.3 per cent of the country’s largely Hindu 1.3 billion population. Muslims form some 14 per cent.

The Catholic Church of India has very much at heart the cause of Dalit Christians. This concern of the Catholic Bishops’ Conference of India (CBCI) is largely carried out by its Office for Scheduled Castes/Scheduled classes, through actions such as lobbying, advocacy, memoranda, court petitions, movements and protests.

On the occasion of this year’s Black Day, Archbishop Felix Machado of Vasai Diocese said the cause of Dalit Christians assumes an added poignancy under the impact of Covid-19 and the closedown.

Speaking to Vatican News, he said the “first victims of all the effects of coronavirus are poor people like Dalits”. They are doubly and triply poor because they are not just deprived economically and have no essential means of livelihood but they are regarded as the “useless of society”, despised, neglected and discriminated against.

Even though Covid-19 strikes anyone who comes in its way, the Bishop of Vasai said, the Dalits, in many ways, are the first and biggest victims of the pandemic. This is why the action of the Catholic Church of India is particularly focused on the Dalits.

Indian Cardinal Oswald Gracias, the president of the Catholic Bishops’ Conference of India (CBCI), the apex body of the Catholic Church in the country, has also called for equal rights for India’s marginalized Dalit Christians.

“Today there is a great consciousness because of what happened in America of the importance of equality for the weaker people,” the Archbishop of Bombay told the Crux news website, July 27, in the wake of the Black Life Matters protests across the US and the world.

“In our own country: The question of Dalits. The Church is shouting from the rooftops that we can’t discriminate against them and is fighting against the caste system,” he said.  “God has treated everybody as equal,” he added.