Foreigners from 35 nations, who are currently in India, have been blacklisted without having been afforded any opportunity to prima facie defend themselves, says the petitions. 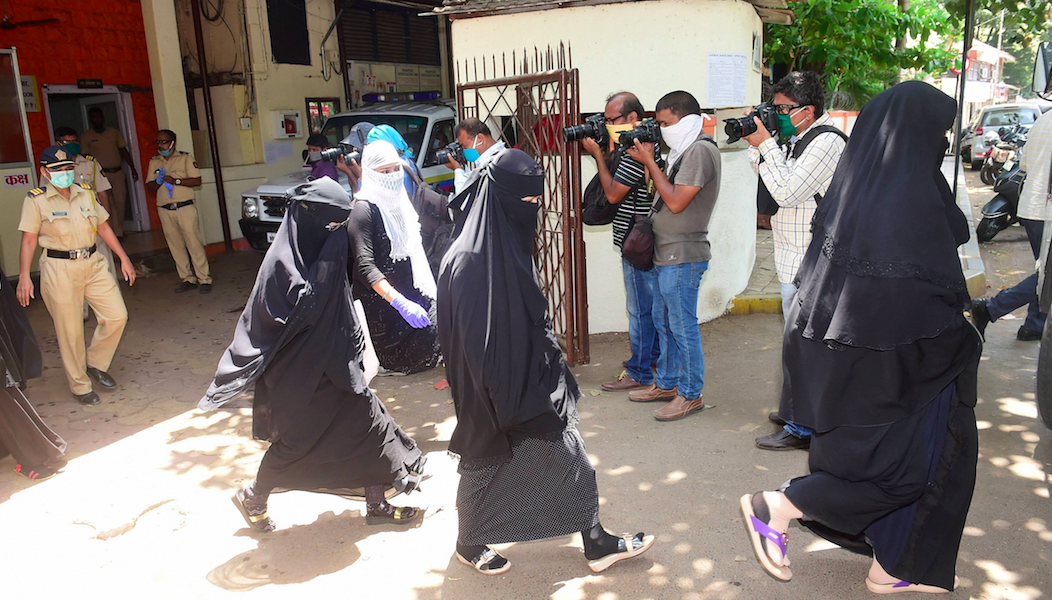 Foreign nationals from Indonesia, who had attended the Tablighi Jamaat event at Markaz Nizamuddin in mid-March, being taken to Bandra court during the nationwide lockdown, in Mumbai, Tuesday, April 28, 2020. Ten Indonesians, including six women were arrested yesterday on various sections of the IPC following completion of their isolation period.

New Delhi: Multiple pleas have been filed in the Supreme Court by foreign nationals, who are at present in India, challenging the Centre’s decisions of blacklisting over 3,500 citizens of 35 countries for their alleged involvement in Tablighi Jamaat activities.

Four writ petitions, including one by a Thai national who is seven months pregnant, have challenged the Centre’s decision of April 2 by which 960 foreigners were blacklisted and another subsequent decision on June 4 by which over 2,500 foreign nationals were blacklisted for 10 years from travelling to India.

“The impugned decision, by its very unilateral nature, infringes the principle of natural justice, particularly audi alteram partem by blacklisting the said foreigners present in India without first granting an opportunity of being heard or notice of any form, and resultantly depriving the aggrieved foreign nationals of their right of locomotion and travelling back to the country of their citizenship, the plea filed by the Thai woman said.

The petitions, filed through advocate Fuzail Ahmad Ayyubi and drafted by advocates Ibad Mushtaq and Ashima Mandla, contended that the en masse blacklisting of over 3,500 foreigners from 35 nations, who are currently in India without affording any opportunity to prima facie defend themselves, is an egregious and blatant violation of Article 21 of the Constitution.

It said that the sudden blacklisting, apart from registration of FIRs against such foreigners, led to the forfeiture of their passports by state authorities, thereby resulting in a complete deprivation of their personal liberty sans procedure established by law.

The impugned decision, therefore, has been passed arbitrarily against the aggrieved foreign nationals, being devoid of any documentary proof or evidence to substantiate the allegations of alleged Tablighi activities, and in the absence of any opportunity being afforded to defend or to explain, is an affront to not only the right to life and personal liberty, guaranteed under Article 21 but also to the rudimental principles of natural justice , the plea said.

The Thai woman said that she is in seven months pregnant and having been quarantined in March, like the other petitioners, she was released from quarantine only in late May.

She said she is still at a facility under restricted movements, without the avenue to go back to her home nation and experience the birth of her child with security and dignity, with her loved ones.

In barely 50 words, the impugned decision as reflected in the press release dated April 2, 2020 has arbitrarily first forfeited the personal liberty of more than 960 foreign nationals, belonging to 35 countries, presently in India, having entered on valid tourist visas, by merely alleging their involvement in Tablighi Jamaat Activities ‘ despite the guidelines of the Respondent No.1 (MHA (the Ministry of Home Affairs)) placing no bar on attending religious congregations or visiting religious places, it said.

The plea said that the figure was recently been revised on June 4 and now more than 3,500 foreigners stand blacklisted.

The Respondent No.1 (MHA) baselessly and arbitrarily passed a blanket ban on the aggrieved foreign nationals under the garb of alleged visa violations pursuant to alleged Tablighi activities, forcing such persons to remain in India under restricted movements, it said.

The plea added that the decisions are based on an erroneous presumption and have equated the mere act of attending a religious congregation or a religious place of worship on the same footing as with Tablighi work such as preaching religious ideologies, making speeches in religious places and proselytization, negating any intelligible differentiation between the two separate and distinct activities.

The plea sought direction of the courts calling for record and thereby declaring the impugned decision of arbitrary and unilateral blacklisting of 960 foreigners by the MHA and the subsequent blacklisting of around 2,500 foreigners to be in violation of Article 21 and therefore void and unconstitutional.

It also sought direction to MHA and Ministry of External Affairs to remove the said foreigners from the blacklist and reinstate their visas and to facilitate them to return to their respective countries.