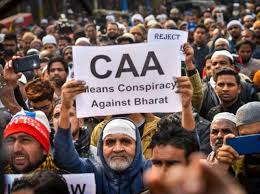 During the passage of the Bill in the Parliament and on public forums intellectuals have pointed out that this Act is full of contradictions as the Bill was drafted in hurried manner for political gains. Firstly, it discriminates against Muslims on the basis of their faith and compels poor Muslims to leave their religion and adopt some other faith. It is against secular credentials of the country. Secondly, it includes Pakistan, Bangladesh and Afghanistan and without giving any logic leaves neighboring countries like Nepal, Bhutan, Myanmar, China, Sri Lanka and Maldives. If religious persecution happens in these countries and people flee towards India, then there is no guarantee of citizenship to the very group of people mentioned in this Act. Before the Partition, India, Pakistan and Bangladesh were part of united India. Logic of including Afghanistan is still missing. As of December, 31, 2014, the government had identified 2,89,394 “stateless persons in India”, according to the data presented in the Parliament by then Home Minister in 2016. The majority were from Bangladesh (1,03,817) and Sri Lanka (1,02,467) followed by Tibet (58,155) Myanmar (12,434), Pakistan (8,799) and Afghanistan (3,469). These are figures of stateless persons from all religions. Majority of people coming from Sri Lanka are Tamil Hindus. What is the reason behind not accepting Tamil Hindus? Lastly, millions of Indians, majority of them Hindus, live and work in Malaysia, Indonesia, Singapore and other South-East Asian countries. If tomorrow persecution happens in these countries, then there is no provision to accept people from these countries.

Seeing the danger posed by the CAA before the country, students, activists and justice loving people had been agitating and protesting against it. Government response to those protests were disproportionate and unjustified. Law enforcement agencies should have full respect for the right of opinion and expression and peaceful assembly. These agencies should not have treated the protesting students as their enemies. I also underline that in a democracy the people have right to protest against the state’s arbitrary decisions but it should be democratic and in peaceful manners. Protestors had been peaceful, govt agencies violent.

The call of a nation-wide NRC defies all logic for a country like India which is on the path of progress and endeavours to become a superpower. The people have voted this govt to address issues like food, housing, education, better healthcare facilities, clean water, clean air, better infrastructure facilities and above all peace and harmony among all castes and communities. They did not give mandate to rake up controversial issues and derail the country from the path of development. If NRC exercise is done, every citizen, 130 crore people, would stand in ques. Poor people of all communities, Dalits, tribals, OBCs and all minorities including Muslims will run from pillar to post to collect documents to prove their and their ancestors’ citizenship. Billions of rupees will be spent and the whole govt machinery would be engaged in a non-productive work. It would open the doors of corruption. Mere announcement would create heart-burn and extreme anxiety in the public and thousands would die in the ques. Nation-wide NRC is basically against all poor and deprived communities of India.

Implementation of CAA in its present form after the nation-wide NRC will be completely inhuman, horrible and dangerous for the future of the nation. NRC exercise, although a very costly, complicated and futile affair, would produce two type of citizens – within the NRC and outside it. People not included in the NRC will be declared illegal immigrants. CAA will divide this category in two parts – Muslims and non-Muslims. Non-Muslim illegal immigrants will be given citizenship as per the provisions of the CAA and Muslims will be subjected to face the hardships like Foreigner Tribunals (FTs), High Courts, Supreme courts and finally of detention centres.

This will create chaos in the country. Fear will pervade everywhere. This will destroy the common fabric amongst the communities and completely ruin the religious pluralism. It would severely damage the image of India on international level. Then it will have no moral authority to claim itself as a secular, democratic and a tolerant nation. In those chaotic situations, the people and the whole govt machinery would not concentrate on educational, social and economic development. Whole economic progress would be derailed and dream of becoming a super power will not be fulfilled.

Although designed to target Muslims, there is no guarantee that other minorities like Christians, Siks, Buddhists, Jains and Parsis would remain in the Act forever. Christians and Parsis may be excluded for following a religion which is not Indian. Others will be forced to accept an identity of being a part of the Hindu religion. This is a long cherished cultural and political project to build a nation on the basis of religion. This is going to be highly unfortunate for India. Our freedom fighters mainly Mahatma Gandhi, Jawaharlal Nehru, Sardar Patel, Dr. Ambedkar, Maulana Azad, etc., had dreamt of a secular and an inclusive India. Our nation’s policies should be based on dreams of Mahatma Gandhi. His policy of geographical criteria of citizenship should be followed and not one which is based on religious identity as propounded by leaders of bigoted thinking. Indians have never thought that documents would be demanded from all genuine and original inhabitants to prove their citizenship. This is inhuman and divisive and against the spirit and ethos of India.

The BJP govt at the centre, through CAA, wants to communalise the social space in India and polarize the voters on religious lines to get political benefits to continue in power. Recently many BJP leaders, in view of West Bengal Assembly elections, have indicated that CAA implementation would start by Jan-Feb next year. The BJP wants to polarize political space in in West Bengal and capture power by unethical means and also to divert attention from core issues of development and its failure on all fronts. I have been against it and will always be against it. If govt decides to implement it, we will hit the streets again and agitate in democratic manners. We will not allow govt to inflict misery and tyranny on 130 crore citizens of India. Scholars, academicians, scientists, members of civil society groups, political leaders cutting across party lines and all justice loving people of India who want to see India as a prosperous nation, should be ready to remind the illegality and unconstitutional nature of this Act to the govt. Government must take it back in the interest of nation.

The writer is ex IPS officer.