Dalit workers who cremate up to 75 bodies for 14 hours a day are not paid minimum wages, says an AICCTU report. 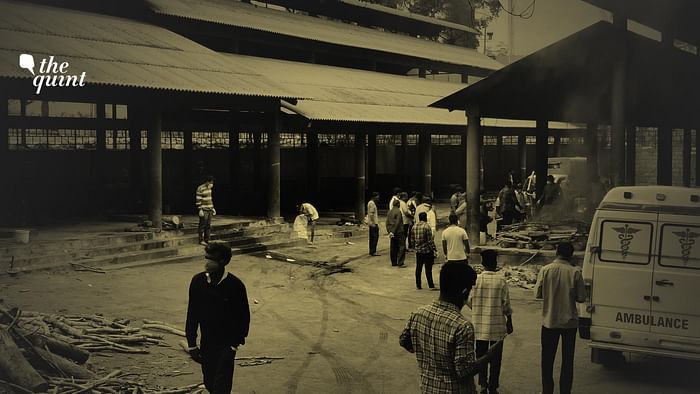 Sowri Raja, a Dalit employed at a Bengaluru crematorium spoke lucidly about the discrimination he faced. “We neither get insurance nor provident fund. Even COVID-19 dead bodies are assigned token numbers, but we are not even given identity cards,” he said.

Speaking at the release event of ‘Dignity Disposed’, a research report released by the All India Central Council of Trade Unions (AICCTU) on Monday, 24 May, Raja said that Dalit workers at crematoriums in Bengaluru are denied their basic rights.

As per the report, “almost all” workers at the city’s crematoriums are Dalits, because in India, cremation is a caste dictated work. The workers who have been putting in 14 hours of hard labour each day, cremating up to 75 COVID-19 victims at each crematorium, do not even get paid minimum wages stipulated by the state government, the report finds.

The report, which was compiled based on interviews conducted by AICCTU volunteers who visited 26 crematoriums around Bengaluru, notes, “The workers start their day between 6 am and 7 am and work till 7 pm or 8 pm”. In some cases, work continues till at least 1 am the next day. There are 48 crematoriums and 58 burial grounds in and around Bengaluru.

“Not a single circular issued for burials speaks of measures to be undertaken to address the impact on workers due to this overload. It is shocking to note that even minimum wages are not paid and there is near total absence of any statutory benefits due to workers,” reads the report.

Moreover, wages are paid arbitrarily as the workers get paid once in three to six months. While the minimum wage for the work is Rs 13132.60 per month, the workers are paid a lot less, anywhere between Rs 1,000 and Rs 10,500 per month. The workers are also not provided leave of absence, insurance cover and provident fund benefits, the report exposes. “This is in violation of all labour laws,” the report reads.

“The workers speak of wanting to ensure that at least their children are educated and can move away from these caste-ordained occupations.”

The report notes that the workers have been forced to spend nights at electric crematoriums because of work overload. “A significant number of workers, especially in burial grounds, stay at the premises in conditions which cannot be considered human,” the report reads.

The poor condition of their dwellings and the nature of their work have exposed the Dalit workers to health hazards.

Though they are frontline workers, none of the Dalits interviewed by the researchers were vaccinated, the report reads. Neither were they given basic self protection equipment including PPEs. Even sanitisers and soaps were not given to them, the report reads.

“Even COVID-19 testing is not made available to all workers. WHO guidelines on precautionary measures and government guidelines on cremations – none are being followed at any facility,” the report states.

A significant number of workers do not have access to drinking water and toilets. Some were found sleeping on gunny bags as they were not provided any proper resting place.

The report has asked the state government to provide Personal Protection Equipment and dignified work conditions to those cremating and burying bodies. The workers should be provided with insurance and provident fund benefits, the report reads.

COVID testing and sanitisation should be made common among such workers. They should also be vaccinated.

“These workers must be recognised as beneficiaries under the Central Government50 lakhs insurance Scheme,” the report reads.

Recognising that the occupation is caste based, AICCTU wants the government to take “concerted steps to ensure that the children of these workers have adequate access to education and employment, among other opportunities”. A committee should be formed in this regard.

The committee on crematorium and burial workers should also work towards ensuring “dignity, health and wages for these workers, and enabling their children to exit the trap of caste-based occupation”, the report recommends.