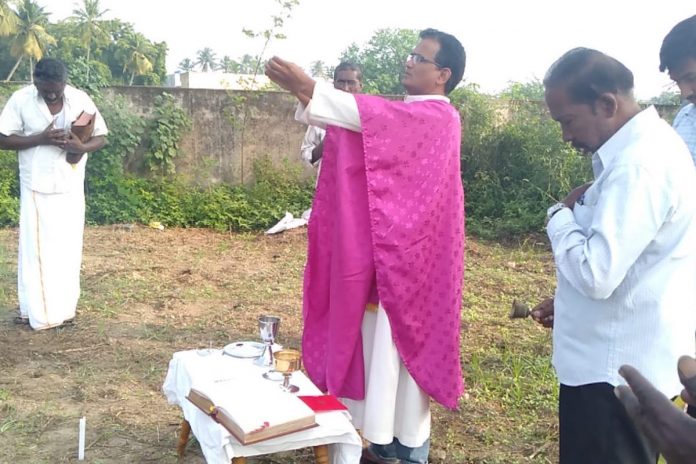 For the past two years the small Catholic community of Namakkal district in southern India’s Tamil Nadu state have not been able to bury their dead at their cemetery due to anti-Christian sentiment. Instead they have been forced to bury their departed loved ones in other Christian cemeteries away from their community.

The communities’ cemetery in the Mallasamudram area is under the care of the 150-year-old Arockiya Matha Annai Church. The cemetery had been approved by the local authorities and was in use for 20 years before pressure from an upper-caste Hindu group made it impossible for Catholic families from burying their dead.

With the pandemic crisis being felt across India, this added strain is further pressuring the community.

“The COVID-19 situation is very serious and if there are any deaths here, we do not have a burial ground,” said local priest Father Lourd Samy. “For the past two years, the opposing groups have been tormenting the residents by saying: ‘Where are other Christians burying? Go there and bury,”’ he said.

“The disregard for Christian and Catholic sentiments [in the area] comes from deep-rooted dislike towards the faith as well as for political reasons,” Father Samy said. “The Christian population in the area is hardly around 400 and the local political parties groom their representatives to show bias towards the majoritarian faith groups to win their vote bank,” he said.

Hindu groups have applied pressure against local Catholics using the cemetery since 2001 but ramped up pressure from 2014 when an NGO run by the area’s upper-caste Hindus took charge of an electric cremation center adjacent to the cemetery.

Sources told this reporter that in time the cremation center constructed under a state funded program flagship began to extend its boundaries and encroached on the cemetery.

“The panchayat [local government] records clearly show that the ancestors of the Roman Catholic Church members also were buried in the graveyard,” Father Samy said. “But the NGO which takes care of the crematorium has been constantly interrupting us from burying the mortal remains of the deceased members. They are similarly not allowing us from conducting Mass on All Souls’ Day [which falls on Nov.2].”

Last year members of the local congregation attempted to have Mass for All Souls’ Day but were forcible stopped from entering the cemetery when they went to make preparations, the priest said.

“But we insisted that it is our practice and that we must pray for the departed souls,” Father Samy said. “To our surprise, the same government official who had earlier granted the permission to conduct Mass issued a fresh order that all crosses shall be removed in five days,” he said.

The government order — dated Nov. 1, 2019 — to remove the crosses on tombs shocked local Catholics such as Noel Aruldas.

For All Souls’ Day last year, the local Catholics were only able to have a Mass in a corner of their cemetery.

“We gather on All Souls’ Day to pray for the deceased in our families as we fear judgment may come upon the departed; we plead God to forgive the sins of our departed family members,” Aruldas said.

Father Samy said that the local government’s order has only emboldened anti-Christian sentiment in the area.

“The group running the crematorium has demanded that the Catholic and Christian community must also cremate the bodies of their dead. This is totally against the practices laid out in the Scriptures,” he said.

For Catholics trying to resolve the issue — the local officials are part of the problem.

“When we met the revenue official with a petition to intervene in the matter and to allow us inside the graveyard, he told us that the permission can only be given for cremation and not burial,” Father Samy said. “But we had been burying the bodies for roughly 20 years now,” he said, “After we showed proof and documents of burials during the past two decades and requested him to at least allow to construct a boundary wall, the officer dodged the matter saying the graveyard does not come under his office’s jurisdiction.”

The local Catholics have filed a petitioned to hold Mass in the cemetery for All Souls’ Day for this coming Nov. 2. They have not been granted permission yet. Father Samy said they will approach the high court in the state to seek a solution to the issue.

The pressure felt by the small Catholic community of Namakkal is not an isolated case in Tamil Nadu state. A Roman Catholic cemetery in Udayarpatti, Tirunelveli district was desecrated on Oct. 18. Seven out of 12 individuals involved in the trespass and the destruction of the cemetery have been arrested by police, said a statement put out by CWS.