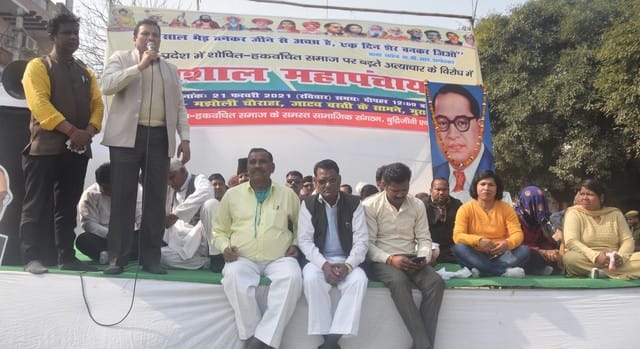 Moradabad CBI investigation should be conducted in the murder of Dalit teacher. The police has uncovered the sensational murder in a whimsical manner. They have recorded their statements according to their pressure. The accused sent to jail from the video does not match. The accused’s narco should be taxed. The oppression of Dalit society will not be tolerated at any cost. If both demands are not met soon then there will be a fierce movement. Police and administration will be responsible for this. Speakers said this on Sunday at the Dalit Mahapanchayat in Majholi Tiraha.

Sumit Ratan Thera from Lucknow said that the incidents of oppression of Dalits have increased in the BJP government. It will not be tolerated at any cost. He appealed to the people of Dalit society to unite. Lalla Babu Dravid, who is presiding over the Mahapanchayat, condemned the incidents of oppression on the people of the society. He taught solidarity lessons to the people of the society. Omilal Valmiki, Chandan Singh Raidas and Mahavir Prasad Maurya demanded a CBI inquiry into the murder of Dalit teacher. He questioned the revelations of the policemen fiercely. Said that the family of the deceased has been rejecting the revelations since day one. The accused sent to jail from the video is not far-fetched. The narco test should be done for the killers sent to jail. Everyone said in unison that if both the demands were not met, then there would be a fierce movement soon. Family members present on the occasion also raised the revelations in the dock. In the Mahapanchayat, Abhishek Ratnakar, Mukesh Kumar Gautam, Lalit Kumar, Anuj Jatav, Vinod Kumar Vikal, Aditya Raj, Rajiv Buddhist, Bali Singh Bharti, Vijay Kumar Pushkar, Sudhir Sagar, Murarilal Sessions, Anita Singh, Sunita Singh, Rintu Sagar, Paramal Singh , RP Singh, Munnalal, Ramdev, Roshni, Kamal Singh, Chunnilal, Naam Singh Bahlia, Rakesh Bahadur, Rajesh Sagar, Amar Singh Sagar, Roop Singh Bharti,

Moradabad Dalit leader Mahavir Prasad Maurya told that soon the society’s delegation will meet the DM. A CBI inquiry will be sought in the case. CCTV footage collected by the police will be sought. The footage will be matched by people from the society and photos of the accused sent to jail. The decision to reconcile will be made by the people of the society. There will be agitation if the photo does not match.

The police has disclosed to Manmarji. An innocent person is caught and sent to jail. CCTV footage and photographs of the youth sent to jail are not far-fetched. The number of times the policemen showed photos and videos were denied. The sister had no love affair with anyone. She did not keep mobile with her. With the CBI investigation, the accused sent to jail should be narco-taxed.