In an unprecedented attack on tribal protesters, security forces in Chhattisgarh’s Silger village opened fire at about three thousand protesting Adivasis leaving three dead. While the police claims the protesters had Naxal links, locals claim that this was gross negligence. 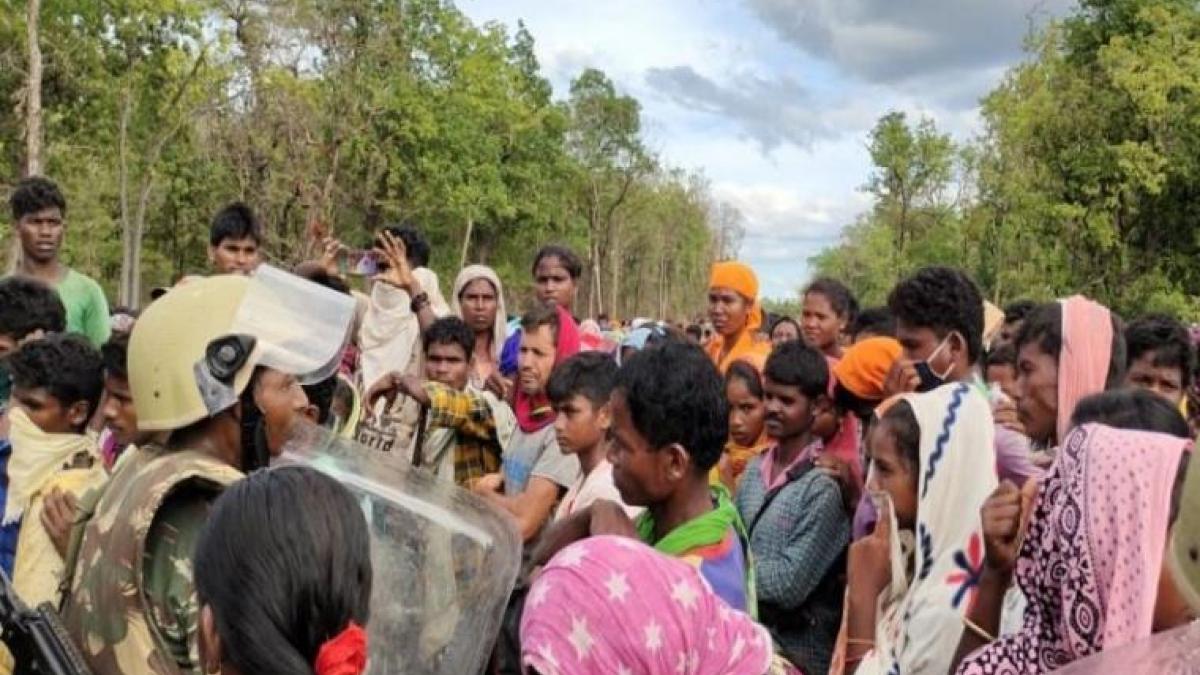 As the Congress government in Chhattisgarh expands the footprint of militarisation and continues to set up security camps, tribals in the state have been conducting sustained protests against the infiltration of more forces, saying that the increased presence leads to brutal repression.

On May 12, security forces set up their latest camp in Silger village in Sukma district, despite stiff opposition from the locals. The opening of the camp had led to widespread protests in the region, also spreading to other villages. However, on May 17 security forces opened fire on a gathering of about 3,000 tribals, killing three. While the police forces claim they were targeting naxals in a crossfire, tribal villagers have been asserting that the unprecedented move was aimed dispersing the crowds and suppressing their movement.

Activists and locals on the ground are saying that the larger context of suppression in the name of protection is not being highlighted and innocent villagers, who were fighting for their rights, have been injured and attacked with impunity.

Speaking to Newsclick, activist Kamal Shukla said: “The camp opened on May 12, despite opposition mounting against it from the beginning. As the camp opened, villagers were coming in everyday in huge numbers to protest against the increased militarisation and the consequent repression. Attempts were being made to disperse the crowds; water was being used, stones were being thrown on them, they were being tear-gassed as well. However, the tribals did not give up. Throughout the protests, over 200 people have been injured, several are also languishing in Sukma jail.”

Questions are also being raised about the claims made by the security forces. “This incident of firing was unprecedented. Never, even in Bastar’s very violent history, has this happened. While the police claim that those who were killed were Maoists, it becomes necessary to ask how did the forces identify who was a Maoist among 3,000 people?” Shukla added.

Moreover, tribal leaders like Soni Sori and lawyer Bela Bhatia were also stopped by the state police from visiting the locals on Wednesday. Speaking to Newsclick, Soni Sori said that while “the violence has been a part of our history, but the key question is why is the government not letting people like me to go and assess the situation on the ground. A large number of people have been rendered injured by the forces, there is widespread anger on the ground. People are deeply hurt and anguished and troubled by the firing. I was denied a visit on the grounds that I need to seek permission in advance. When I did the police came to my house early in the morning to tell me I should not make a visit because of the Naxal movement; there is a widespread presence of forces blocking us from uncovering the truth.”

“The question is: How did the police fire at the tribals? If there was counter fighting then how is there no evidence of any attack on the forces. Whatever is being shown in the media is a cover-up as activists are also not being allowed to go in for any fact-finding missions,” she added.

Protests against security camps such as the one in Silger have been ongoing in the state since last year, when the Congress-led state government had proposed the setting up of eight new security camps in the state, including in Bijapur, Dantewada and Sukma among many others. The local population suspects that the bid is not as much about increasing security cover in the region as it is about suppressing the Adivasi culture and their voice. The villagers also fear that these camps may end up as centres of the use of brutal force and violence against women.

Newsclick had previously reported about the injuries several tribal protestors had faced while opposing the camps in Bijapur; several were also arrested for staging protests.

Tribals had also dug up roads as a symbolic means of protest to keep the security forces out of the region.

The CPI-M has condemned the firing on the tribals opposing the camp, saying a military solution was not acceptable and that the camp be removed. CPI (M) State Secretary Sanjay Parate said that if the people of the region do not want the camp, then the government should remove it for the restoration of peace. Parate said that the provisions of PESA and 5th Schedule also do not allow the government to open camps of military forces in “an arbitrary manner in the area.” He said that the “militarisation of this area is not to protect the rights of the tribals, but for the violation of their rights and the suppression of the democratic right to protest”.

The CPI (ML) Liberation also condemned the CRPF “brutality on Adivasis”. In a statement, it said that the land in question has “historically” belonged to the local Adivasis and that it was not aware of security forces taking prior permission from the Gram Sabha before building camps in the area. “CPI (ML) Liberation demands unconditional release of the arrested Adivasis and that all the perpetrators of this brutality must be brought to justice. We also demand that the Congress-led Chhattisgarh government immediately intervenes and stops illegal construction of camps,” it added.

Speaking to Newsclick, journalist Ashutosh Bhardwaj, who has been covering the area extensively, said: “Not long ago, the area where this incident took place had expansive wilderness. Silger is not the only police camp, the government has been constructing one camp after another in the region to counter Naxalism. It has led to resentment among the locals. This incident, therefore, needs to be seen in a larger context. The protests against the Silger camp marked the accumulation of Adivasi unrest. While the police claims that the protest was led by Naxals, local reports suggest that there wasn’t any Naxal presence. Bastar is not new to Adivasi protests, but it is perhaps the first instance in a decade when the police opened fire on unarmed protestors.”

The firing has also triggered the immediate demand of a fair probe into the matter, as several members of the tribal community remain locked up in jail. Chhattisgarh Bachao Andolan (CBA), a group of activists, put out a public statement claiming that the police opened fire on the tribals who were protesting against the camp. They demanded that the incident be probed by a retired high court judge in a time-bound manner and that an FIR be registered against those found guilty.