The Christians belong to 13 tribal families of Rayagada District, Odisha state who have been stranded in the jungle without proper shelter, food, water and electricity.

“It is the rainy season now, and we fear the sickness that comes with rainfall, the poisonous insects and the unhygienic conditions we are living in,” Nori Kanjaka of Sikarpai village told Morning Star News. 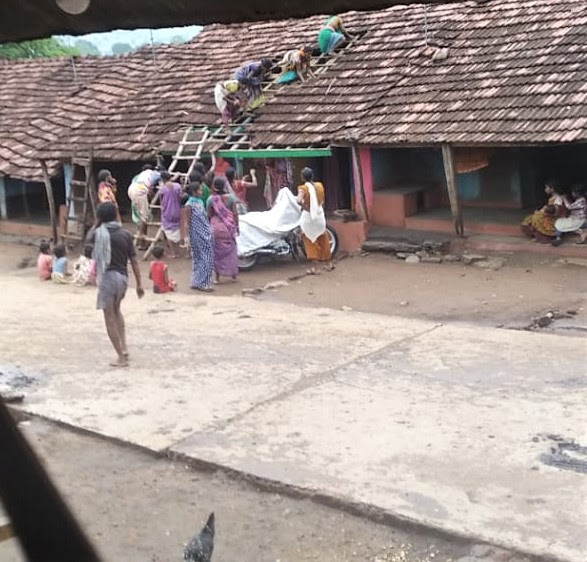 Five Christian families fled Kotlanga village on June 7 after receiving threats. They took the threats seriously as villagers who practice traditional religion in Sikarpai, 20 miles away, on May 23 had destroyed the roofs of the homes of six Christian families, looted their belongings and beat them, driving them into the jungle, victims said.

The villagers in Kotlanga had threatened to assault the five Christian families and prevented them from building their roofs. Opposition was so fierce, according to sources, that the Christians had to flee to the jungle to avoid attack on the night of June 7 and joined the Sikarpai Christians who were already sheltering in there.

Tribal animists in other area villages are driving out Christians, Kanjaka said.

“After the villagers in the other villages heard of how we were chased from our village, they too have forced Christians living among them to leave the village, either by threats or by physically attacking them or by illtreating them,” Kanjaka told Morning Star News from the jungle.

Two families from Chichinga village were also forced to take shelter in the jungle. There are now 57 men, women and children there living in shelters of used polyethene sheets and wood, Kanjaka said.

Police Suggest Renouncing Christ
Despite registering several complaints with police, the Christians continue to face opposition, and officers have done little to protect them, victims and Christian leaders said.

Christians registered complaints on May 10 and March 15 at the Singhpur police station.

“A FIR [First Information Report] has been registered in two cases, but the Christians in all these villages continue to face opposition for their faith,” Pastor Singh said.

Christians have also notified block and district administrations of the attacks without receiving any assistance, they said. Authorities told Christians they must renounce Christ to resolve the conflict, sources said.

“They [officials] told us that you step back, deny your Christian faith and come back to your tribal fold, only then peace will return. What is the use of such a faith?” said one of the victims who requested anonymity.

Christians who reported the May 25 attack to local police said the officer in charge and the sub-collector visited the Christians in the jungle on Tuesday (June 22).

“They told us to go back to the village and live with the villagers, perform their rituals and worship the deities they worship,” Rupa Kanjaka said. “We have been asked not to conduct our prayers.”

Refusal to Resolve Conflict
Pastor Prakash Bhatra, a senior Christian leader and a member of the Odisha Pastor’s Association, told Morning Star News that attacks began in November 2020, when two Christian families from Chiching village were forced out of their homes for praying.

Villagers took their belongings from their homes and burned them, he said.

“The two Christian families are living outside the village and could not return to their homes,” Pastor Bhatra said.

In Sikarpai village, high-caste Hindus prevented a marriage ceremony in a Christian home. They told the Christians not to hold any weddings and kept them from drawing water from the only village tube-well.

“We had to struggle to obtain water for the marriage preparations, Sikarpai resident Nori Kanjaka told Morning Star News. “We decided to walk a few miles and fetch water from a neighboring village. On March 13, when two girls from our family had gone to fetch water in the evening, three men sexually molested them. They tore their clothes and attempted to rape them, but some of our men reached them in time and rescued them.”

After Christians on March 15 registered an FIR about the attack at the Singhpur police station, villagers threatened to drive the Christians from the village, Nori Kanjaka said.

Christians praying together on May 23 were interrupted by the local tribal animists, she said.

The tribal village men beat the Christians, and then they sent the women of their homes to dismantle the roofs of the Christians’ homes.

“If the men would have done this, the police would have taken action against them, so it is safer to send women, because the police will just spare them,” Rupa Kanjaka said.

The women climbed the roof of each home and removed the rooftop tiles so that six Christian families had no shelter and had to flee, he said.

“The women told us to leave the village immediately, or we would be killed,” Rupa Kanjaka said. “There are pictures and videos that we shot while the women dismantled our roofs.”

The men looted the homes of the Christians and carried away all their domestic animals, said Pastor Bhatra.

When the Christians approached the village elders and headman to request peace talks, the elders told them to leave the area, saying Christian prayers disturbed their deities, Rupa Kanjaka said.

“We picked up everything that was left in our homes and moved to the jungle,” he said.

On May 29, the Rayagada deputy collector, sub-divisional officer of police and the station officer in charge met with the headman of Sikarpai village to initiate peace talks, Pastor Bhatra said.

“But the villagers refused to settle the matter,” he said.

Christian leaders wrote an application signed by all family heads in the jungle and sent it by post to the director general of police, collector, chief secretary and various high officials, he said.

When the magistrate summoned both parties on June 17, the Christians appeared, but the six animist villagers were absent, he said.

“The court has ordered again for the six villagers to present themselves and will summon the Christians once again, if need be,” Tandi said.

He emphasized that these Christians were not recent converts but had been following Christ for 14 years.

“If they [villagers] had problem with prayers, then why did they not oppose them earlier?” Tandi said. “Why is it that it is only in the past year that they have suddenly started to express their displeasure? It is evident that someone is instigating them, and thus this sudden opposition.”

In Siripai village, police intervention led to peace talks between the Christians and the followers of tribal religion, sources said, while in Kona village, Christians had to leave their farmland. Villagers there told them to abandon their faith in order to continue farming.

“They incurred a huge loss of land and all the grain that they had sown on the land,” Pastor Bhatra said. “They had tilled the soil but had to just abandon it, and the persecutors enjoyed the harvest.”

In Tongapai village, outsiders came and instigated villagers to assault Christians living there, the pastor said. The police intervened to carry out peace talks that resolved the conflict, he said.