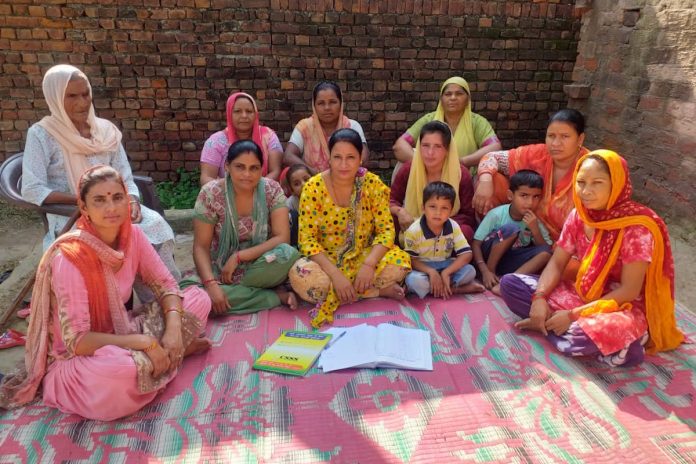 Darshana Devi’s husband died from cholera six years ago in a remote village in northern India’s Jammu and Kashmir region.

A grocery shop owner with limited income, he did not leave much behind for his family to survive on. Being a mother of three children under the age of 13, Devi had no other option bar running the shop herself but her limited experience led to financial losses.

“It was hard for me to go to the wholesale markets, identify the products and keep a proper check on balances and profits,” Devi said.

Last year a group of women from the region’s Catholic Social Service Society visited Devi at her home; they told her about a church-run program designed to improve the life of disadvantaged women.

The program was to be held at a government run school, and Devi, not expecting much to come from it, reluctantly agreed to attend.

“There were some educated men and women who informed us about government schemes which are meant to help destitute people. A lady speaker also said that there is a scheme for widows from the government and that they are entitled for monthly pension and scholarship for their children,” said Devi.

The program is part of the church’s efforts to assist people know their rights and entitlements under Indian law in a region with poor literacy rates.

Among the laws that they inform people about istheMahatama Gandhi National Rural Employment Grantee Act which guarantees 100 days of paid employment in every financial year and the Public Distribution System which distributes subsidized food and other items to India’s poor.

“We work with village institutions and communities, as well as panchayats to enable men, women and children in the villages to understand their rights, access the relevant government schemes, and are involved in democratic processes and decision making,” said Father Justin Thiraviam, director of Church’s social service wing in the region.

“There are government schemes for destitute widows, their children, for the upliftment and education of daughters,” Father Thiraviam said.

“Part of the problem in rural areas is that women aren’t treated as equals in the family,” Father Thiraviam said.

“As Christians we have a firm belief that God created men and women as equal and therefore it is our religious obligation also to empower women with their rights and also make them aware about their real status in a society,” he said.

Darshana Devi’s situation became much easier once she understood how to access a government grant of 2,000 rupee ($US 30) each month. She now also has a monthly 3,000-rupee ($US40) education allowance for her children who are back attending school.

“My elder son studies in class 8 and wants to become an engineer. I was completely unaware about these entitlements till the church officials told us,” Devi said.

Ratna Kumari is another villager who has been helped by the church-run program.

Two years ago, a road accident disabled her husband and ever since she and her family have struggled to earn a living from their two acres of land.

“Due to my husband’s disability, we couldn’t cultivate the land. When we leased it, we did not earn much either,” said the 39-year-old. “It was an inexplicable disaster for us,” she said.

Her life took a turn for the better when church officials told her about government assistance programs.

“I was completely caught by surprise. We never had any information about such welfare schemes,” Kumarisaid. “But soon after I submitted the disability certificate of my husband along with the income proof, I was enrolled for the monthly grant.

“Also, I got scholarship for my two kids. The money directly comes to my bank account now,” she said.

Father Thiraviam said the awareness programs have been held throughout the Jammu and Kashmir region over the past two years.