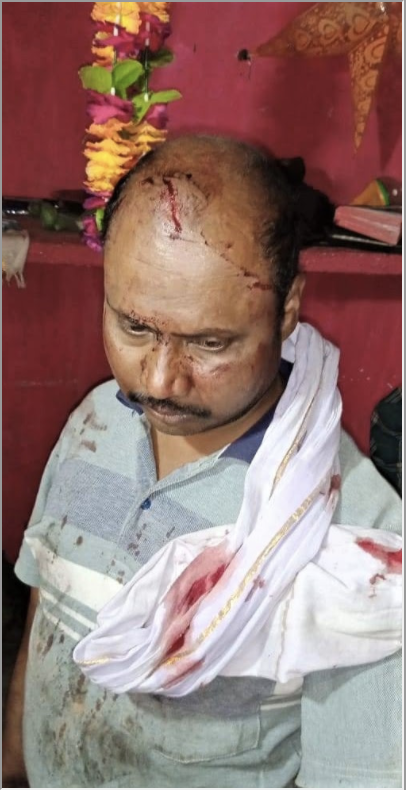 Eight Christians were injured and five of them hospitalized, including two women and a pastor who suffered head injuries and a dislocated shoulder, in the March 8 assault on a house church meeting in Surguda village, Bastar District in Chhattisgarh state, said the pastor, Samson Baghel of the Methodist Church.

Methodist Church Pastor Baghel, who lives in a nearby village, and 20 other Christians from surrounding areas had come to the home of Jaggu Kashyap for the meeting with the only three Christian families who live in Surguda village. Five of the Christians attacked sustained head injuries.

“Some church members caught hold of my hand and asked me to escape, but I said I will not leave the church members to face the tribulation alone,” Pastor Baghel told Morning Star News. “After I fell on the ground when struck twice on my head and my shoulders, church members pulled me aside, and I helplessly watched Jaggu and his family being beaten till blood oozed out of their bodies.”

In foul language as they beat them, the approximately 30 tribal animists told the resident Christians to leave the village and ordered the visitors to never return, the pastor said.

“Jaggu sustained injuries at two places on his head and had to be given stitches,” said Pastor Baghel, who was also wounded on two parts of his head. “He got hurt on his face and lost a lot of blood. He is feeling very weak physically.”

“It was only after all the members jointly intervened and somehow stopped their brutality that the attack stopped,” Pastor Baghel said, adding that he has led worship at Kashyap’s home for more than eight years and had never received any threats.

“I never thought that something like this would happen to me,” he said.

After the onslaught, the mob collected 10 to 12 Bibles, songbooks and household belongings including chairs, table and carpet, piled them outside and set them on fire, the pastor said. They also damaged nine motorbikes and four bicycles, tearing out tires, pulling out wiring and breaking glass parts, he said.

The attack took place shortly before 7 p.m., and only after the intervention of the district superintendent of police did police arrive at 12:30 a.m. from the station nine miles away, victims said.

“The police station in-charge refused to come, stating that it’s a sensitive area,” Pastor Baghel said. “He instead asked us to come to the police station. I said, ‘How can we come? We are badly injured and bleeding.’”

Asked the reason for the delay, Sub-Inspector Budhram Komre told Morning Star News, “We had to make arrangements for the force to arrive, and only then we started out.”

Police took eight Christians to the Prathmik Upchar Kendra First Aid Center in Badekilepal, the nearest government hospital, at around 2 a.m. Doctors immediately referred the elder Kashyap and his wife to the Dimrapal Medical College. Six of the others, including Pastor Baghel and Dursai Kashyap, were told to wait.

“Dursai and I were profusely bleeding,” Pastor Baghel said. “I pleaded that we too should be sent to Dimrapal hospital, but the hospital staff said it was unnecessary. They applied stitches to our open and deep wounds on the head and kept us on some painkillers till late noon.”

“It was almost evening, and both the hospitals said that they will run tests on us only the next day,” Pastor Baghel said. “By then we were completely exhausted and were feeling very weak. We could not even walk because of the pain and weakness.”

Kashyap and his son were discharged on March 10, while the elder Kashyap’s wife Budri and Pastor Baghel were released two days later, only to return to another hospital the same evening.

“Dursai, Jaggu, his wife and I experienced a lot of pain, discomfort and weakness in our bodies after we got discharged, so the same evening we went and got admitted in the MPM hospital in Dharampura, Jagdalpur,” Pastor Baghel said.

All four were discharged on March 14 and returned home, though medications and treatment continue.

Police Investigation
Police took the Christians to the Kodenar police station to record their statements on March 9 but initially refused to register a First Information Report (FIR), the pastor said.

“They were trying to persuade us to compromise with our attackers, but we bluntly refused,” Pastor Baghel said.

The FIR (No. 0018) was registered on March 9 but dated March 8. Pastor Baghel gave police 16 names of assailants that Kashyap identified, but police listed only three names in the FIR and marked the rest as “others,” said the pastor, the complainant in the FIR.

Superintendent of Police Deepak Jha confirmed receiving 16 names but told Morning Star News the other names would be added to the FIR only after recording Jaggu Kashyap’s official statement.

“Baghel is not a resident of that village, so we will take the statement of Jaggu – the host of the meeting and the resident of the village – and if he verifies the names, only then we will add them to the FIR,” Jha said.

“Police have put mild sections in the FIR, while the attackers have committed serious offenses such as trespassing, burning of Holy Scripture and inflicting serious injuries,” pastor Salim Hakku, who had contact with police since the evening of the attack, told Morning Star News. “The police seem to have a favorable attitude towards the perpetrators.”

As of Monday (March 22), police had not made any arrests, Pastor Hakku said. Officer Komre told Morning Star News that police had made no arrests because officers had yet to obtain medical reports from the hospitals and had yet to record victims’ statements.

Jha confirmed registering a case after taking initial statements but said police are still investigating whether other charges should be added.

“The sections that are currently applied are all bailable sections; we are waiting to get the victims’ statements, and then we will add some non-bailable sections to the FIR,” he said. “We will only then proceed with the arrests with stringent sections.”

The Rev. Victor Daniel, district superintendent of the Methodist Church, Bastar, said many attacks on Christians are taking place in the region.

“The tribals who are following the Christian faith are being forced either by social ostracization or by physical violence to stop them from following and believing in Jesus Christ,” Pastor Daniel said. “They are forcing them to return to worshipping tribal deities like Budhadev [ancestor worship].”