Since the Dalit security guard did not give a complaint fearing that he’d lose his job, a VCK member has done so. 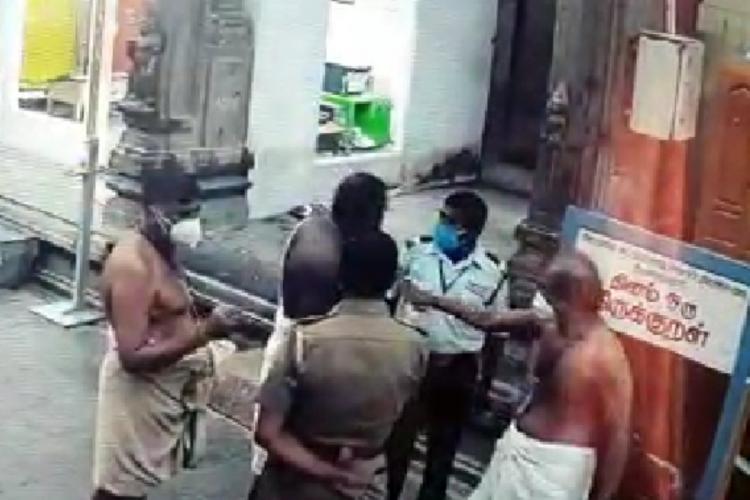 A Dalit contract security guard of Tiruchendur Sri Subrahmanya Swami Devasthanam temple was hit by the priest of the temple within the premises. The VCK has alleged that the guard was beaten by the Brahmin man because he declined to provide the latter the temple keys without the permission of the concerned authorities.

The CCTV footage accessed by TNM shows a group of security guards coming out of a room. Two priests who are standing nearby can be seen intercepting the Dalit security guard and demanding that he provides them the keys but it results in an argument. After a heated exchange of words in front of a police personnel and two other priests, the man identified as Jayamalini Kumar, hits and pushes the security guard. Jayamalini Kumar once again attempts to hit the guard but other people stop him.

The dispute was captured on CCTV. However, fearing that he would lose his job, the Dalit contract worker reportedly decided not to register a complaint with the police. Following this, Viduthalai Chiruthaigal Katchi’s (VCK) Thoothukudi District Secretary Murasu Thamizhappan has given a complaint to the Tiruchendur Temple Police and has urged them to register an FIR under the Prevention of Scheduled Castes and Scheduled Tribes (Prevention of Atrocities) Act 1989.

In the complaint to the Tiruchendur Temple Police on behalf of the Dalit employee, Murasu alleged that Jayamalini Kumar threatened that the security guard will lose his job if he does not give the keys since it was their temple and whatever they say will become the rule. He also hit the security guard. So considering all this, the FIR should be registered under the SC/ST Prevention of Atrocities Act, the complainant has said.

Speaking to TNM, Murasu said, “I visited the survivor and I spoke to him. He is just scared that he will lose the job and since he has three girl children, he does not want to speak up about the issue. So I have given a complaint to the police but I have still not received the FIR copy.”

Murasu added, “Jayamalini Kumar used to bring influential people to the temple and would help them get easy dharshan. This time also, he wanted the keys for dharshan and the survivor told him to get permission from the concerned authorities. However, the priest started an altercation, hit and pushed him down.”

The survivor declined to give the keys only due to the coronavirus situation, he added.

Murasu said that he will take up the matter with the Tahsildar on Saturday and with the Collector on Monday. “The officials should provide safety at the workplace for the survivor and should ensure job safety.”

This is not the first time that the priest, Jayamalini Kumar, has been involved in such a ruckus. Murasu alleged. “Even last year, Jayamalini Kumar hit a man for using a space of the temple. saying that only upper caste people are allowed to enter the place. He has also used casteist slurs on a lot of people. He is doing all this despite knowing that CCTV cameras are installed. So this should be stopped,” he said.