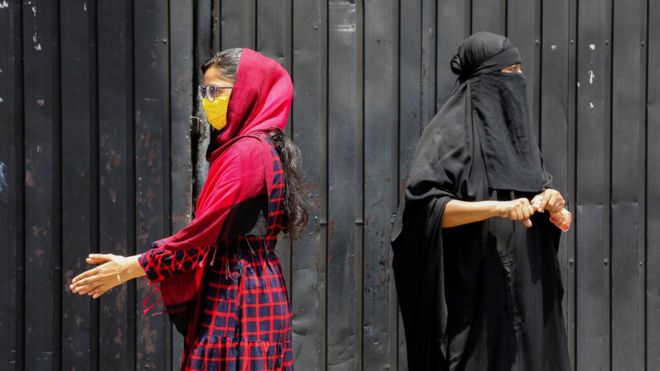 Sri Lankan authorities are insisting on cremation for coronavirus victims – a practice forbidden by Islam. The nation’s minority Muslim community says they are using the pandemic to discriminate, writes BBC Sinhala’s Saroj Pathirana.

On 4 May, Fathima Rinoza, a 44-year-old mother of three from Sri Lanka’s minority Muslim population, was admitted to hospital with a suspected case of Covid-19.

Fathima, who lived in the Sri Lankan capital, Colombo, had been suffering from respiratory problems and the authorities feared she had caught the virus.

On the day she was admitted to hospital, the family was “set upon” by the authorities, her husband Mohamed Shafeek said.

“The police and military along with officials arrived at our door,” he said. “We were kicked out and they sprayed [disinfectant] everywhere. We were all scared but they didn’t tell us anything. Even a three-month-old baby was tested and they took us like dogs to the quarantine centre.”

The family was held for a night but released the next day and told to quarantine for two weeks, Mohamed said. By then, they had received news that Fathima had died, at the hospital, on her own.

Fathima’s adult son was asked to go to the hospital to identify his mother’s body. He was told that her body could not be returned to the family, he said, as her death was linked to Covid-19.

Instead he was forced to sign papers authorising her cremation, the family said – even though under Muslim law cremation is considered a violation of the human body.

“He was told that her body parts needed to be removed for further tests. Why would they need body parts if she had corona?” said his father Shafeek, who feels the family were not fully informed about what happened.

Fathima’s family and others in Sri Lanka’s Muslim community say the authorities are violating their rights by forcing them to cremate victims even though coronavirus victims can be buried.

They argue it’s the latest step in a pattern of discrimination by the majority Sinhalese population. A petition against the cremation rule has been accepted by the country’s Supreme Court, which will begin hearing the case on 13 July.

Many Muslims in Sri Lanka feel they have been demonised since April 2019, when Islamists linked to little-known local groups targeted high-end hotels and churches in Colombo and in the east of the country, killing more than 250 people in a spate of devastating attacks.

Since the death of the first Sri Lankan Muslim from coronavirus on 31 March, some media outlets have openly blamed the Muslim community for spreading the disease, even though only 11 deaths have been officially recorded in the country.

All 11 bodies, including Muslims, were cremated.

Dr Sugath Samaraweera, the government’s chief epidemiologist, told the BBC it was government policy that all those who die from Covid-19, as well as those suspected of dying from it, are cremated, as burials could contaminate ground drinking water.

Dr Samaraweera said the government was following expert medical advice, and applying the rule to anyone suspected of dying from coronavirus, regardless of religion.

“The WHO offers guidelines for the whole world. It is our responsibility to adopt or customise those guidelines suitable to our country,” he said.

But Muslim activists, community leaders and politicians have asked the Sri Lankan government to reconsider the decision.

Ali Zahir Moulana, a former minister and senior leader of the Sri Lanka Muslim Congress party, said the Muslim community was prepared to accept the rule “if there is evidence or scientific backing to prove that burial is dangerous to public health”. But he questioned the science behind it, and accused the government of pursuing a “dark political agenda”.

Interim guidance published by the WHO in March says victims of coronavirus “can be buried or cremated”, and does not mention dangers to groundwater.

On the same day that Fathima died, 64-year-old Abdul Hameed Mohamed Rafaideen passed away at his sister’s house in Colombo. The labourer and father of four had been suffering from breathing difficulties.

His youngest son, Naushad Rafaideen, told the BBC that a neighbour from the majority Sinhala community died the same day.

Because of lockdown travelling restrictions, local police asked the family to take the body of the neighbour, together with their father’s body, to the hospital.

At the mortuary, the doctor told Naushad he was not allowed to touch his father’s body because of the risks of Covid-19, even though it wasn’t clear whether the virus was the cause of death.

Naushad, who cannot read, was asked to sign some papers which gave permission for his father’s body to be cremated.

He said he wasn’t sure what would happen to him if he didn’t sign, but he feared a backlash against his family and community if he refused. He said the Sinhalese family was treated differently, and allowed to pay respects to their relative at a funeral parlour, though the BBC could not independently verify this. Only Naushad and a handful of relatives were allowed to attend the cremation of his father, he said.

Meanwhile, nearly six weeks after the death of his wife, Shafeek is unsure whether she ever tested positive for coronavirus, and he is struggling to come to terms with not being able to bury her body. One thing he was sure of, he said. “We Muslims do not cremate our dead.”