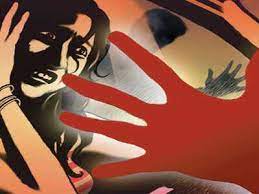 In a village in Tirwa Kotwali area, two youths raped a Dalit girl who had been thinking of her friend on Saturday night. After committing the crime, both the youths fled, threatening to kill them if they complained. Giving an application to the Kotwali police, the victim girl has requested to file a report.

In the application given to the police, it has been said that on Saturday night, the girl along with her friend had gone to the farm near the tubewell outside the village for defecation. At the same time, a youth resident of a village in Thathia police station area was present with all of them. Together they caught him. His friend was banished from the spot. After that both of them raped her. On complaining, they ran away threatening to kill the entire family. After returning home, the girl informed the family members. In the case, Tirwa Kotwali in-charge said that the sub-inspector was sent to the spot to investigate the matter. If the case is found to be true in the investigation, arrest will be made against both of them after registering a report.

Note: This news piece was originally published in the hindustan.com and use purely for non-profit/non-commercial purposes exclusively for Human Rights objectives.