TNN | Nov 11, 2021, 04.13 AM IST
JAIPUR/ALWAR: The state police constituted a special investigation team (SIT) after unidentified miscreants allegedly fired at Bharatpur BJP MP Ranjeeta Koli after midnight on Tuesday and put up a threatening poster with her photo crossed by a blue marker and two bullets on either side.

“Dalit hai, Dalit bankar reh,” (You are a Dalit, act like one) read the first paragraph of the letter. The accused threatened that they had let her off before, but won’t be spared the next time. “Agli bar tere andar itni goli hongi, dekhte hai tereko kaun bachata hai, abb marne ke liye tayyar hoja (next time there will be so many bullets inside you that no one would be able to save you, be ready to die),” it said. 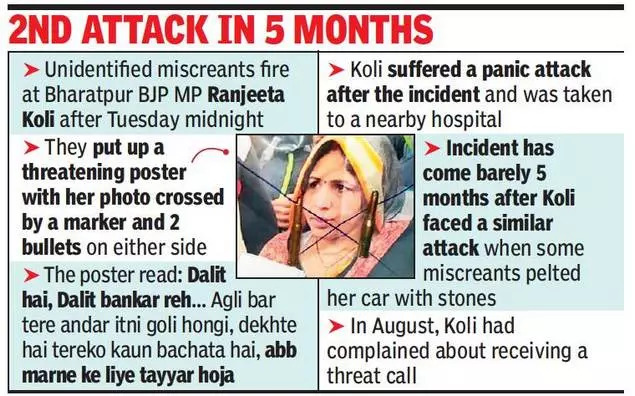 Koli was shaken after the incident and was taken to a nearby hospital for treatment. District collector Himanshu Gupta who met the MP on Wednesday said that her condition was fine. The incident comes barely five months after Koli faced a similar attack in the district in May when unidentified miscreants pelted her car with stones. Earlier in August, Koli had complained about receiving a threat call.

District SP Devendra Kumar Bishnoi said that prima facie the police have not recovered any empty shells to indicate the firing yet, but an intensive probe was underway.

District superintendent of police Devendra Kumar Bishnoi said that prima facie the police have not recovered any empty shells to indicate the firing yet, but an intensive probe was underway. The incident took place shortly after 12am on Wednesday when unidentified persons allegedly fired at her house in Bayana town of the district.

The accused also pasted a poster with a large photo of Koli, crossed by a blue marker with two cartridges affixed on either side. They also pinned a letter on the poster which warned of dire consequences in the future.

Bishnoi said cartridges were recovered from the poster and an FSL examination would be conducted. Meanwhile, Chief Minister Ashok Gehlot also spoke to Koli over the phone on Wednesday. “The DGP, principal secretary, home department, has been directed to take strict action after (a) thorough investigation of the incident. To investigate the incident, a team of SOG from Jaipur will go to Bharatpur and investigate the case,” he tweeted. The SIT will be led by SP (SOG) Manish Tripathi and includes additional SP (Bharatpur) Vandita Rana, circle officer (Bayana) Ajay Sharma, additional SP Gumana Ram, police inspectors Mohan Lal Poswal and Pooran Singh.

Sources informed TOI that Koli had been persistently raising the issue of illegal mining in the region for the past several months. “SIT officials have arrived at the spot to investigate the matter. A probe will indicate who put up the poster and if indeed the firing took place,” said a senior official.
Share
Facebook Twitter Pinterest Linkedin