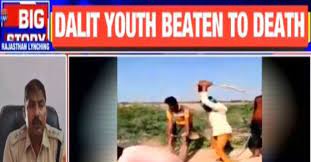 Harchandpur. A Dalit man, who went to defecate in the field on Monday night, was brutally murdered by thrashing him with pegs. Sensation spread in the village and the surrounding area due to the discovery of a blood-soaked body in the field in the morning. The market for discussions about the murder has become hot. The real reason behind the murder is not yet clear. There has been a stir in the police department after the incident. Circle Officer Maharajganj, forensic team reached the spot. Police have taken the body in possession and sent it for post-mortem.

Sant Lal alias Beche Lal, a resident of Chaksunda village of the police station, aged about 50 years, son of the self. Ram used to live alone in the house. He has two married sisters in their in-laws’ house. This morning, the women of the village had come out towards the field of defecation. Then a blood-stained body was seen in the mustard field behind the panchayat building near the village.

The frightened women returned home on the back foot. Many people reached there when the dead body was found in the field. A water bottle, mobile, torch and a bloodied wooden peg used to bind animals were found at the spot. Only then the body of the deceased was identified. The matter was first reported on dial 112. Bachha Lal has been beaten to death with a peg in the field.

The people of the village were stunned after hearing the news of Beche Lal’s murder. Villagers started gathering in the field. On coming to know about the murder, the sister and brother-in-law of the deceased fled to the village. CO Ram Kishore Singh, Inspector in-charge Uresh Singh reached the spot along with the team force. Forensic team in-charge Ajit Tiwari, Tripti Kushwaha, Umesh Kumar Vishwakarma, Virendra Kumar collected evidence from the spot.

There is a lot of talk about the incident in the village. It could also be a case of illicit relationship.

Note: This news piece was originally published in hindustan.com and used purely for non-profit/non-commercial purposes exclusively for Human Rights objectives