Three policemen suspended and arrested for allegedly assaulting the man and getting his head and moustache shaved inside a police station in East Godavari district; probe ordered.

In Andhra Pradesh, a Dalit man was beaten and his head and moustache shaven in a police station on Monday 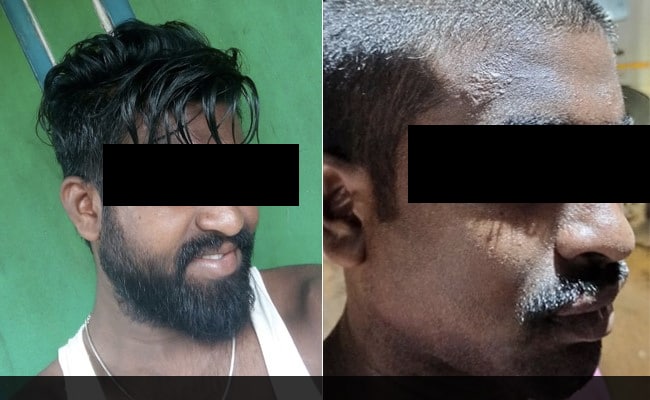 A Dalit man in Andhra Pradesh was beaten and his head and moustache shaved allegedly by two policemen acting on behalf of an MLA of the state’s ruling YSR Congress Party. The incident took place inside a police station in East Godavari district, 271 km from Hyderabad on Monday.

The incident, tagged the “return of jungle raj” by Opposition parties, has triggered protests and led to the suspension and arrest of the accused policemen – one sub-inspector and two constables. State Director General of Police Gautam Sawang has condemned the incident and ordered a probe.

I Vara Prasad, a young man from Vedullapalli village, is in a government hospital with severe injuries suffered during the assault that took place reportedly in his mother’s presence.

According to Mr Prasad, trouble started when he and two others stopped the movement of sand trucks for the last rites of someone in their locality. This angered a local politician who allegedly hit Mr Prasad with his car, resulting in an angry exchange of words, sources said. This was when the local YSRCP MLA allegedly got involved.

According to sources, the legislator called an under-training sub-inspector from the police station and told him to “teach Prasad a lesson”, promising to help confirm his job.

“The next day, the sub-inspector and two constables came to our village and took me and two others for investigation. The inspector beat me indiscriminately with a belt and kicked me. He called a barber who shaved off my hair and chopped my moustache even as I pleaded with them to spare me,” Mr Prasad told reporters.

Deputy Inspector General (Eluru) KV Mohan Rao said a case was lodged against the sub-inspector and two others under the SC/ST Atrocities (Prevention) Act and the Indian Penal Code. “We regret the incident of humiliating the youth by the Sitanagaram police. We shall take stringent action against the accused and ensure that such incidents do not recur,” the senior police officer said.

Congress leader Harsha Kumar demanded the arrest of all those involved and said “failure to deliver justice will result in protests”.