A video of the 28-year-old man being beaten by an angry mob went viral on social media. 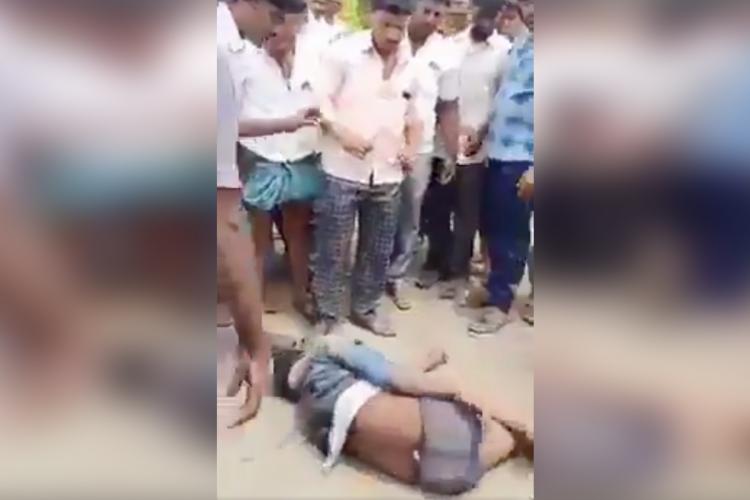 A man can be seen lying on the road, crying out in pain and surrounded by an angry crowd. A young man is beating him with a stick while the crowd eggs him on. This horrifying video was shot in Karnataka’s Vijayapura district, where a Dalit man and his family members were beaten brutally. His family has alleged that he was beaten up for touching a car belonging to members of the Lingayat and Kuruba communities. The angry mob did not spare his 26-year-old sister, whose clothes were torn by the mob and she was also allegedly sexually harassed in the middle of the road.

A dalit man assaulted for allegedly touching a scooter belonging to an upper caste man. FIR registered in local police station in #karnataka

1/2
FIR and complaint copy in the thread pic.twitter.com/ooKl7u3LLC

People in the crowd, however alleged that the young man had sexually harassed a woman on the road, which is what made the crowd turn on him. The police told TNM that they were investigating both angles, and could not confirm allegations from either sides.

What the family says

On July 18, the 28-year-old man was walking along with his father from his residence located within the Talikoti Police Station limits. Both men are daily wage workers and were headed to a construction site near their home around 11 am. Speaking to TNM, the man’s father said that he walked ahead of his son and was about 200 metres away when he heard a commotion. When he turned back, he allegedly saw a group of five men beating his son.

“I immediately went back and asked them what happened. The five men accused my son of touching their car. They said, ‘He touched our car and made it impure, now he should be taught a lesson’,” the 28-year-old man’s father, Venkatappa*, told TNM.

By 11.30 am, around 15 to 20 people had gathered on the street, about 600 metres away from Venkatappa’s house, and were beating his son. Venkatappa says that he fell to their feet and begged them to leave his son alone. “One of the men there kicked me and started hurling abuses, saying I am from the lower caste. He said, ‘How dare you touch me and make me impure.’ They started beating both of us. They removed my son’s pants and started kicking him and hitting him with sticks,” Venkatappa alleged.

Soon after, a crowd of around 50 people gathered around the father and son while they were being beaten. Venkatappa’s daughter and wife, who heard the commotion, rushed to the spot. His 26-year-old daughter begged the men to stop assaulting them, her father said. “Two men who were there just grabbed her. They tore her clothes and started kicking and beating her. When my wife tried to stop them, they beat her up too,” Venkatappa alleged.

The men allegedly threatened to burn them alive and also warned them that they would not be able to live without the fear of being killed in the village. “They hurled vulgar abuses at us and they also abused my daughter and wife. They said they would not let us live in peace and that they would burn us alive. I just begged them to let me go. By 12 noon, the Talikoti Police Inspector came to the spot when some people informed him of the violence. He broke up the crowd and also took me and my family members to the hospital,” Venkatappa added.

Talikoti Police told TNM that the accused are absconding and that they will be arrested soon. “Forty-eight police officers in Vijayapura have got COVID-19 and another 150 of them are in quarantine. We have a shortage of personnel to investigate cases. That’s why it is taking time. We have offered protection for the victim’s family and we expect to arrest the accused persons soon,” the Talikoti Police said.