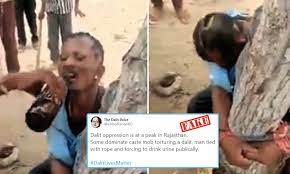 A group of at least 15 men allegedly attacked, hurled casteist slurs and force-fed urine to a Dalit man and his son in Rajasthan’s Barmer. The police suspect it to be a case of old enmity.

A Dalit man and his son were allegedly beaten and forced to drink urine by a group of men in Rajasthan’s Barmer, the police said on Saturday. The accused also allegedly hurled casteist slurs at the father-son duo, the police said.

Video Player is loading.This is a modal window.The media could not be loaded, either because the server or network failed or because the format is not supported.VDO.AI

According to the FIR registered by the police, Raichand Meghwal and his son Ramesh were purchasing goods at a grocery store in Gohad Ka Tala village under Bijrad police station in Barmer. Suddenly, they were attacked by at least 15 men and forced Raichand to drink urine. They also humiliated the duo using caste slurs, the police said.

While Raichand got hit on the head and lost a tooth, Ramesh fractured his leg and also sustained injuries to his hand. They were brought to Chauhatan for primary medical care and then shifted to the Government Medical College in Barmer for further treatment.

Based on the complaint by the father-son duo, the police have registered a case against 15 people, including one Khet Singh, who is the prime suspect in the case. The police suspect it to be a case of old enmity.

The accused are absconding, the police said, adding that they have begun the investigation in the case.