Police are yet to file a case in the incident. 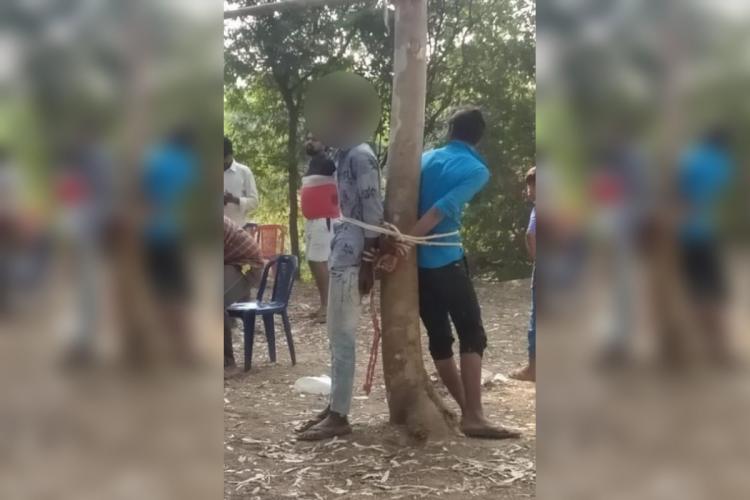 Two 18-year-old Dalit teenagers were bound to a tree and brutally thrashed with lathis by four men belonging to an upper-caste community for more than 12 hours, accusing them of stealing hens. Videos of the barbaric incident where the hapless teenagers were surrounded by men, and flogged with sticks, was captured by bystanders on their mobiles, and shared on social media. The victims were tied to a tree for several hours, police said.

The incident took place on Tuesday under the Dharmajigudem police limits in West Godavari district of Andhra Pradesh. The duo were identified as Venkateswara Rao and Santhosh, who are presently availing treatment in Chintalapudi government hospital. They have suffered injuries to their legs, shoulders and back. Their condition is stable, police said. The victims belong to the Mala community, categorized as Scheduled Caste in the state, while the accused are from the Kapu community.

Narrating the incident, Venkateswara Rao told the media, “On Monday, when we were going to a nearby village, we stopped at a shop in Gonthupadu village. While we were having a discussion whether we should fill fuel from the bottles available at the shop, Santosh had already grabbed the bottle. When the shop owner noticed this, she accused us of stealing the petrol and made a scene asking if we were the ones stealing hens in their village.

The shop owner then called the villagers, and four of them forcibly detained and questioned them about their alleged attempt to steal petrol. They also accused them of stealing hens.

While initially the two of them were let off after calling their parents, another teenager, identified as Praveen was held back, Venkateswara said. “The next day (Tuesday) when we went, they said that Praveen revealed the truth and attacked us again. After tying us up, they thrashed us and asked us to confess in front of the police that we stole hens. If we did not, they threatened to kill us. Out of fear, we told police that we stole the hens.”
“We have no role in the crime,” Venkateswara added. According to the police, the victims were assaulted from Monday night to Tuesday night.

Speaking to TNM, Dharmajigudem Sub Inspector U Lakshmi Narayana, a case has not been filed as the victims are yet to give their statement. The SI said that the four perpetrators belonged to the Kapu community. “We will file a case under Scheduled Castes and Scheduled Tribes, Prevention of Atrocities Act as soon we receive a complaint,” Lakshmi Narayana said.