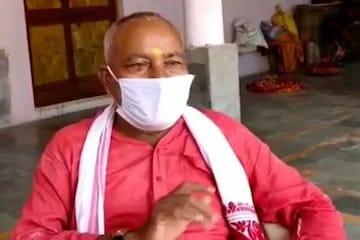 The priest allegedly used casteist words against the women and asked them to take a bath in the toilet of the municipal corporation.

A group of Dalit women  protested at a temple in Moradabad district of Uttar Pradesh after the priest allegedly did not allow them to enter the premises and perform rituals.

The incident occurred in Daswan Ghat temple in Lal Bagh area under the Mughalpura police station in the district. The women alleged that they wanted to enter the temple to perform rituals after the death of a family member, however, the priest Chhotelal Daksh did not allow them to enter.

The matter is being investigated by the Moradabad police.

The women who went to take a bath (as part of the rituals after death) at the ghat near the temple alleged that the priest used casteist words against them. He also asked them to take a bath in the toilet of the municipal corporation. This led to a ruckus near the temple gates after which the police reached the spot and questioned many people. The police have registered a complaint against the priest.

Several Dalit leaders visited the location after the incident and raised slogans to protest against the alleged act by the priest. According to them, the women had to take bath in the open areas as the priest did not allow them to do so inside the temple.

Temple priest Chhotelal Daksh termed the allegations baseless saying that he did not misbehave with any Dalit woman.

“I think few people who are conspiring against me have sent the women. All those women took bath themselves in the bathroom built by the municipal corporation. I did not ask them to do so. I am ready to serve punishment if I am found guilty,” he said.