Khan was shot in Northeast Delhi’s Maujpur. When he filed an FIR, the police charged him and five fellow Muslims. 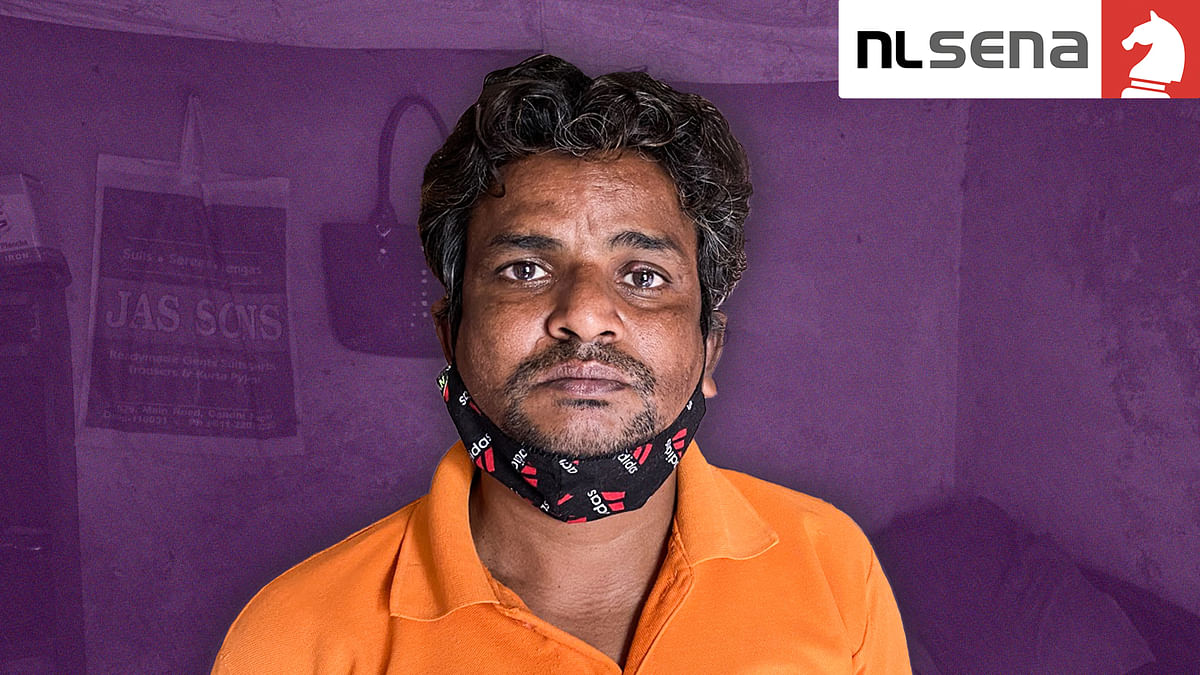 Sajid Khan, 34, does not remember much of February 25, 2020. The daily wager, who moved coolers for a living, had left for work that morning. On February 23 and 24, Northeast Delhi’s Maujpur had been consumed by communal violence, allegedly provoked by an incendiary speech by BJP leader Kapil Mishra. The third day began with a deceptive calm. By afternoon, the conflagration fomented once again, and a panicking Khan raced from Vijay Park to his home in Kardampuri across the Shahdara drain.

“I left my cart behind,” recalled Khan, now living in a smaller, emptier room, a testament to his subsequent financial ruin. “When I reached the Kabir Nagar puliya around 2 pm, a group of men under the Maujpur-Babarpur metro station ran after me. Then I felt something in my back and fell unconscious.”

According to his medico-legal certificate, the bullet hit Khan’s lower back and exited from the right of his abdomen. He was taken to a private clinic in Kabir Nagar, where a doctor gave him a jab, applied bandage, and prescribed medication. Five days later, on March 2, relief volunteers took him to St Stephen’s Hospital near the Tis Hazari court. There, an officer from Welcome police station took Khan’s statement and filed an FIR – number 116/20.

Khan, who hails from Old Delhi, cannot read or write. In the following weeks, he was summoned to the Welcome police station and made to sign documents. He was never told what they were about. So it came as a shock when he learnt that he was now an accused in his own case.

The police chargesheet explains how this came to be in a terse sentence: “Accused Sajid Khan was injured in the riots and so this proves that he was also involved in the riots.”

Akhtar Shamim, Khan’s lawyer, said that in his 25 years of legal practice, this is his first case where a complainant has been booked as an accused. “Here is a man who should get compensation for being shot in the violence,” he said. “Instead, he is going in and out of court as an accused.”

Khan has been charged under five sections of the Indian Penal Code pertaining to unlawful assembly, rioting, and armed with deadly weapons. He was arrested on the morning of April 13 and released later that day because the offences are bailable.

The police relieved itself of the burden of proof. It was the daily wager who had to prove his innocence. “I told them that I’m a mere thelewala and was only returning home from work during violence,” Khan said. “But the police said that I should get a witness to back me up.”

Sajid Khan is a daily wager who lives in Kardampuri in Northeast Delhi.

The Delhi police chargesheet in the case, perused by Newslaundry, contains no evidence against Khan across 19 pages. There are no civilian eyewitnesses, forensic evidence or footage of him from the violence.

There is one disclosure statement – taken in police custody, with no evidentiary value legally – where the daily wager allegedly says that he joined a mob protesting against the Citizenship Amendment Act, or CAA, in Kardampuri and “stone pelted Hindus” when the violence broke out. “Our people started shooting,” it says, “and one of the bullets hit me from behind and I fell unconscious.”

Khan denies giving this statement to the police. “I never said any of this,” he told Newslaundry. “I signed documents because the police said it’ll help me get my cart back. I did not mention CAA or NRC. I knew of protests when they happened, but I was a worker earning about Rs 400 a day. Where would I get the time to attend protests?”

The Kabir Nagar puliya where Sajid Khan was shot.

However, this is not the only instance where Khan points to fudged statements. His statement attached in the FIR claims that moments before he was shot, the mob that chased him were located in Kardampuri. “I did not say that,” Khan repeated. “The mob that chased me was actually standing under Maujpur-Babarpur metro station. I do not know if they shot me. I was running away.”

The FIR statement was recorded by sub-inspector Amit Bhardwaj of Welcome police station when Khan was admitted in St Stephen’s hospital. “An hour after I gave him my statement, he returned with a new one,” Khan said. “He told me he had rewritten it with corrections, and I had to sign it, which I did.”

Bhardwaj is the investigating officer in FIR 116/20. We met him at the Welcome police station to speak about Khan’s case, but he refused to say anything on the record.

Newslaundry sent Delhi police a set of questions as well. We’ll update this story when we receive a response.

Where the mobs stood, and why it matters

On February 25, 2020, “Hindu” rioters allegedly stood under and around the Maujpur-Babarpur metro station, mixing with police personnel. Across the drain, in Kabir Nagar, stood the “Muslim” mob.

Ground reports from that day claim that the two mobs stone-pelted each other for nearly two hours, with the police actively siding with the Hindu rioters armed with guns.

“Every single tear gas shell fired by law enforcement authorities on Tuesday, February 25, in the area was fired from the area where the CAA supporters were rioting — towards the Muslim colonies,” said a Millenium Post report. “Not a single shot was fired by police towards the CAA supporters, who were pelting stones, burning vehicles, homes, shops and whatever else that came their way.”

Later that day, residents of Vijay Park told Newslaundry that the carnage was led by goons from Bajrang Dal, the youth wing of the Hindu supremacist Vishwa Hindu Parishad, or VHP. They alleged that one of them shot and killed Mubarak Hussain, a 28-year-old daily wage worker from Bihar. According to Print, Hussain was killed at 1:40 pm, nearly an hour before Khan was shot.

Videos obtained by Alt News from February 25 corroborate these accounts. It shows Hindu rioters mingling around a police vehicle near the Maujpur-Babarpur metro station while shooting at Muslims residents in the gullies of Vijay Park.

By twisting Khan’s statement to say that the bullet came from Kardampuri, the police skipped investigating the Hindu mob. It also swept its own complicity in the violence under the carpet. Like other riots cases reported by Newslaundry, the police theory in this case – backed with flimsy evidence – is that Muslims killed Muslims in the middle of a communal carnage in Northeast Delhi.

Besides Khan, the five other accused in the case are Mohammad Abbas, Zahid Ali, Mohammad Fazil, Shoaib Akhtar and Kazim.

The convenient craft of nabbing the accused

The five accused in FIR 116/20 were arrested on April 18, 2020, but for robbery, not rioting. The police claim that they were nabbed together near a school in Jafrabad after a tip off by a “secret informer”. In a convenient twist, during interrogation, the five not only confessed to robbing an egg warehouse in New Jafrabad on April 15, but also to rioting on February 25.

None of them have been named by Khan in the FIR.

On April 19, 2020, the five were slapped with charges in one robbery case and three carnage cases, including FIR 116/20. In addition to IPC sections on unlawful assembly and rioting, the charges include attempt to murder, causing grievous hurt, and assaulting public servants along sections of the arms act.

The chargesheet also does not contain any forensic or electronic evidence against the accused.

Between September 2020 and February 2021, the five men were granted bail by the Karkardooma court. The bail orders, accessed by Newslaundry, noted that “there is no public eye witness of the said incident” in the chargesheet. Judge Amitabh Rawat gave them relief “considering the period of incarceration and in the totality of the facts and circumstances of the case”.

The police diary, which records updates of an investigation, contains a statement by one constable Pushkar of Welcome police station. Dated April 19, 2020, it says that Pushkar saw the five men rioting in Kabir Nagar on February 25. The court noted this two month gap in its order, dubbing it “not a strong piece of evidence”.

Newslaundry met Abbas and Kazim – who are out on bail – and the families of Akhtar and Zahid to discuss the cases against them. Their testimonies contradict major claims of the police investigation.

For one, they claim that they weren’t arrested together. Abbas, 24, a resident of Bhrampuri, says he was arrested from his home on April 18. Kazim, 19, who lives in Jafrabad, claimed that the police picked Shoaib and him together on April 18 from their workplace – a factory – in Jafrabad. Zahid’s sister, Itad, a resident of Maujpur, said her brother was dragged out of their home on the night of April 17.

Kazim, who spent nine months in jail, said that his disclosure statement in the chargesheet was fabricated at the Welcome police station. “Five of us — including Shoaib, Abbas and Fazil — were made to sit before a table with blank papers,” he recalled. “One sub inspector Himanshu and two junior officers made us sign on 20-30 blank papers each.”

In their near-identical disclosures, taken in custody, the five claim that Muslims were angry with Hindus because they stone pelted the protests against “anti-Muslim” citizenship amendment act and the proposed national register of citizens on February 23, 2020.

One sentence in all statements is repeated twice: “One among us threw a stone towards the Hindus, to which they retaliated. I threw a stone too. The police lathi-charged us and we ran away.”

The consequences of a shabby investigation

A year after the carnage, Khan is without work. Before his injury, he could pull 4-5 quintals down the Jafrabad road. But when he rented a cart to resume livelihood, the injury wore him down. The medical expenses, including that of his tuberculosis-stricken wife and their crippled child, forced him to sell their fridge, cooler and television during the coronavirus-induced lockdown. The compensation never arrived too. “When I complained to the police about the compensation, some of them said I should take care of them if I get it,” he rued.

Zahid, Shoaib, Kazim and Abbas hail from poor families too, earning about Rs 400 a day as daily wagers. “He and his father are the only source of income in our family,” explained Tehseen, Zahid’s mother, in her tiny home in Maujpur’s Bajrangi Mohalla. “For seven months after his arrest, the police did not even tell us where they took him. The very mention of police terrifies us.”

Kazim’s nine months in jail not only cost him his factory job, but once he got bail, the ongoing court matters ensured he couldn’t keep one too. “The boss was unhappy with the leaves I had to take for court appearances,” bemoaned Kazim. “I was let go. My family borrowed Rs 80,000 for the bail bond in the four cases police slapped on me. How am I supposed to repay it?”

Dil Faraz, Abbas’s brother, told us that the money his family spent on the case turned their lives precarious. “I can’t tell you everything we went through,” he muttered, avoiding eye contact, “but only that during Ramzan, there were days when we had nothing to eat during iftar.”

This story is part of the NL Sena project, which 159 of our readers contributed to. It was made possible thanks to Ron Wadhwa, Chirag Arora, Shaikh Haque, Zaid Razvi, Nishant, Rakesh, Sumavarsha Kandula, Hemant Maheshwari, Jayan Cherian, Manisha Madapathi, Akshay A Pande, and other NL Sena members. Contribute to our next NL Sena project and help to keep news free and independent.