“I am scared that these people will kill me and my family like they killed my father. I am mustering all my strength to register this complaint. I request you that legal action be taken against the accused and me and my family be given protection,” Sahil Parvez wrote on 19 March in a complaint at the Idgah relief camp set up in the aftermath of the northeast Delhi riots.

At the time of his father’s death on 25 February, the FIR only had section 302 of the IPC (murder) attached, however after Sahil’s detailed complaint, which he claims were not paid heed to earlier, relevant sections were added to the existing FIR. Consequently, over twenty men were questioned and 16 arrested from North Ghonda.

The Quint has confirmed these sixteen accused were either active members of the Rashtriya Swayamsevak Sangh (RSS), post-holders (zimmedaar), or had visited the local shakha on and off. 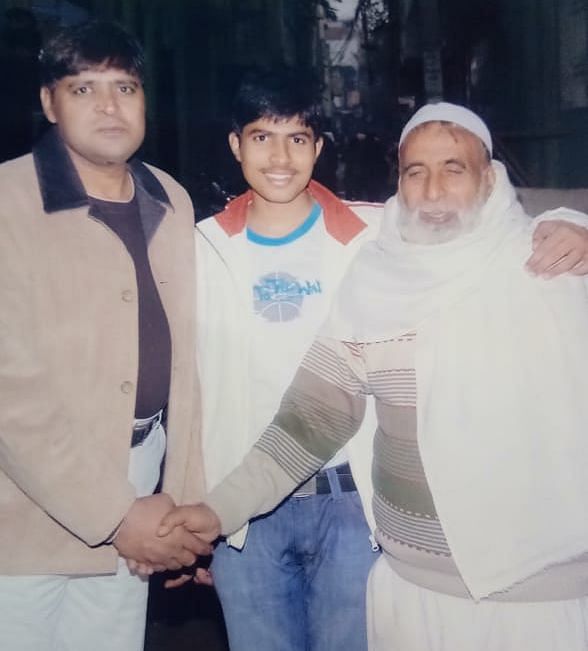 They were all arrested on charges of murder (Section 302), rioting (Section 147), rioting armed with deadly weapon (Section 148), being part of an unlawful assembly (Section 149) and criminal conspiracy (Section 120 B) on 9 April, the relatives of the accused and the lawyer of the victim confirmed to The Quint. The charge sheet in the case has also been filed.

This reporter spoke to the victim and assessed the complaints as well as the FIR. We also reached out to the RSS for their side of the story. The Sangh has claimed they are being targeted and the police probe shows that ‘neither did they make an attempt to ascertain the facts nor did they take any action against the Muslims involved in the riots.’ A detailed statement from the RSS side is also a part of this story.

In the complaint from 19 March, which bares the Bhajanpura police station stamp of receipt, Parvez has detailed two days of violence in his locality in north east Delhi on 24 and 25 February.  He says that the violence started on 24 February at around 12:00 noon when people in the area began screaming slogans like ‘Mulle, ka**e murdabaad, Kapil Mishra zindabaad, ‘desh ke gaddaro ko goli maaro saalon ko’.

Upon hearing all this, Parvez saw some of the accused outside the street armed with lathis, sticks, guns, iron rods, swords and petrol bombs.

He goes on to say: Till late at night these people were constantly attacking the homes of Muslims with petrol bombs, stones and bullets. They also kept abusing us all night. Those who were trying to go out to reason with them and try to bring peace to the area, these men would also attack them.

Sahil Witnessed His Father Being Killed

Writing about the evening where his father was shot, Sahil says:

In the evening at around 7:00 pm (the next day on 25 February) when me and my father went out to offer prayers, in the street ahead of us outside Sushil, Jaiveer, Devesh Mishra (gali 8) and Naresh Tyagi were standing with swords, guns and sticks in their hand. When he saw my father, Sushil shot bullets towards us. My father fell on the floor and I ran to save my life.

After a day long interrogation on 9 April, 22 people were called to an SIT Crime Branch office in Dwarka, out of which 16 were finally arrested.

Devesh Mishra, who has been named by Parvez in his complaint, has not been arrested or charge sheeted yet. He has been working with the Sangh since 1996 and for the last eight years has been the Yamuna Vihar district in-charge for the RSS. Recently he was moved to the Vishwa Hindu Parishad and is now their district vice president.

He told The Quint, “People are being targeted here. All of those who were targeted are connected by the same ideology.” Explaining why he has not been arrested, despite being named, Mishra said that he was not in Delhi from 23 to 27 February, “I was in Etawah with my family and I can prove it,” he said.

When this reporter reached out to Sahil regarding this, he said, “I saw the man (Devesh Mishra) with my own eyes and I have written what I saw. I believe in the law. Despite being discouraged by people saying that nothing will happen, I have written everything in this complaint at a huge personal risk.”

Another person named in the complaint, but not arrested, is Subhash Tyagi. When asked if the accused were related to the Sangh, he said, “We do keep in touch with people from the Hindu community as where we stay, there is one side where the Muslim community lives and on the other side the Hindu community lives. Is it wrong to be related to the Sangh? They are not criminals. They do good work and think about the development of the country.”

When asked how Devesh and Subhash were related to the Sangh, Devesh explained, “VHP, where I am now, is a part of the RSS. Since 1996 I worked for the Sangh, then later, I was asked to take responsibility of the VHP in the district. Just like Subhash Tyagi was sent to Hindu Manch after a while.”

While Devesh was not arrested, two of Subhash’s brothers are among the sixteen who have been arrested. “My brothers Uttam Tyagi and Naresh Tyagi were arrested by the police on 9 April. We are trying to see now what we can do, people from a particular ideology are being targeted,” he said.

The 16 Accused Who Are Members of the Sangh

“All the innocent accused are active workers of the RSS,” an RSS functionary has told The Quint in a detailed response to the allegations, mentioned at the end of this story.

Devesh and Subhash also explained to this reporter how the sixteen accused were related to the RSS.

Starting from Subhash’s real brothers, Uttam Tyagi and Naresh Tyagi, this reporter was told how Uttam had responsibilities in the Sangh, has been a long time pracharak and would give a lot of his time to their activities, while Naresh Tyagi, his second brother was also regular and an active member.

Another accused, Hariom Mishra, had the responsibility to conduct a shakha every morning in north Ghonda. While the fourth accused, Rajpal Tyagi, was a mathematics teacher and used to regular visit the Shaheed Bhagat Singh Park shakha every morning. “He was not given more responsibilities as he was a teacher and only had so much time,” Devesh explained.

We have covered four accused till now.

Now among those who were active and regular members of the Sangh, along with their families, are Pawan (son of Mohanlal), Suresh Pandit, Sonu alias Amit Sharma (son of Om Prakash Sharma) and S Maheshwari (son of Chandra Maheshwari bijliwale). This brings us to eight. Other than that brothers Atul Chauhan and Virendra Chauhan, Deepak Kumar, Sushil and Uttam Mishra were all people who visited the RSS Shakha on and off and especially helped campaign for the BJP during the elections, Devesh confirmed. These constitute the thirteen.

The remaining three include Jaiveer Tomar and Chiranjeev. Both were supporters of the Sangh and their ideology, while the third, Sandeep Chawla, they said was not regular in the circles of the Sangh. In a statement given to The Quint, an RSS functionary has confirmed that all 16 are members of the RSS. 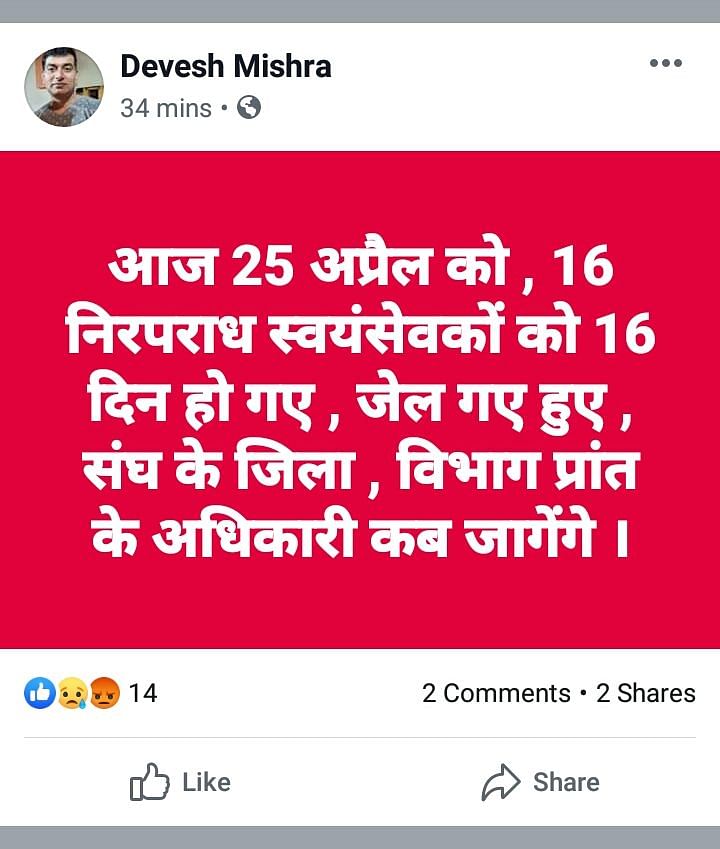 Getting furious at the inaction of the state-level workers of the RSS, VHP, Hindu Manch, BJP MLAs, MPs, Mishra had written a Facebook post on 25 April where he said, “It has been sixteen days since innocent sixteen swayamsevaks, when will the representatives of the Sangh wake up?”

In another post written around 20 May, Devesh said that 16 innocent Hindus were being jailed and these workers or elected representatives do not care about them. These innocent men have been jailed but ‘those who claim to protect the interests of Hindus, the RSS, VHP, Hindu Jagran Manch, BJP leaders have turned a blind eye,’ the post read.

Speaking about how he has been a swayamsevak since 1996, Mishra said, “Today I am very sad looking at the way the RSS representatives are behaving.” He also asked, “How can the members of the Sangh who call us their family eat or sleep? When in our families, one or two-odd people are lodged in jail.” 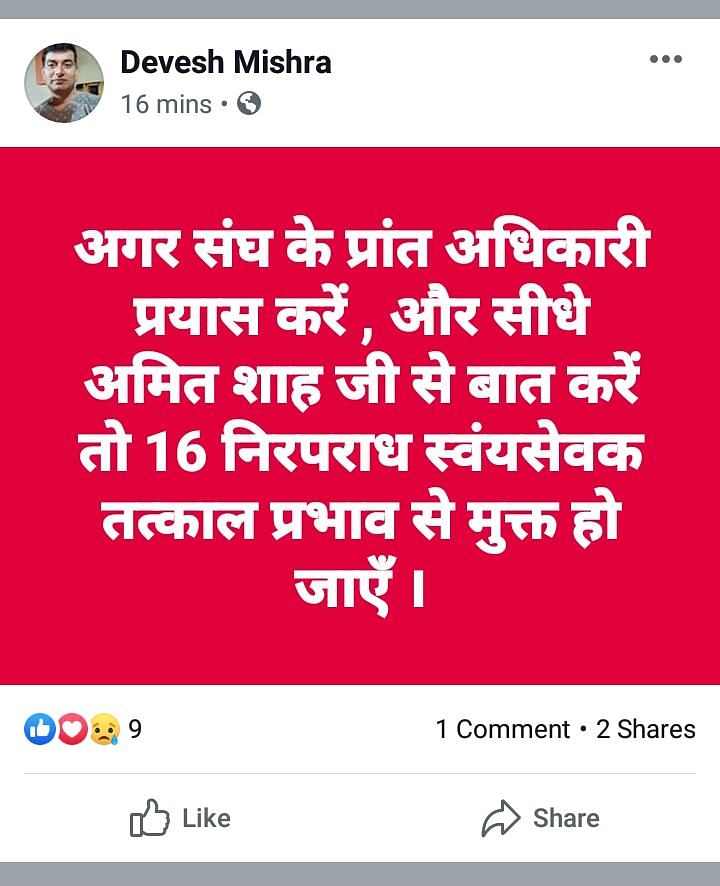 The post reads: “If the Sangh’s leadership tries and talks to Amit Shah directly, the 16 innocent men will be released.”

While the investigation into Parvez’s complaint was still going on, the arguments on the charge are yet to take place. Speaking to this reporter from his native village, he says he is being pressurized to withdraw his complaint.

In the 19 March complaint, he had reiterated the same fears. He wrote: “They told me that if I open my mouth then my entire family will be killed with bullets. They said if I go to the police, they will know in a minute. I am scared that these people will kill me and my family like they did to my father. I request you that legal action be taken against the accused and me and my family be given protection.” Then again in a letter dated 16 May, also accessed by The Quint, Parvez wrote that many of the accused he named were still not arrested.

“I gave a written complaint with names regarding my father’s death. However till now many of the people have not been arrested. They are threatening to kill me. They are saying that I must write that I made a mistake in giving these names and that I cannot recognise the accused. They also claim to have close proximity with the police department and home ministry,” he wrote.

Also Read : ‘Want to Live in the Moment’: Inside UAPA Accused Ishrat’s Wedding

While the 16 accused are members of the Sangh, the one current VHP post holder, Devesh Mishra, has not been arrested as yet.

They go on to narrate 16 points of which some are being added here (read the full response and its translation at the end of the article):

Speaking to The Quint regarding Mishra’s case, Vishwa Hindu Parishad international Joint General Secretary Surendra Kumar Jain said, “I feel like you are dragging Devesh’s name unnecessarily in the case. The policemen have themselves interrogated and let him go. If the complainant takes anyone’s name, and till the time the person is not hung to death, only then will the secular people of the country breathe easy. I find it shocking, that when the police has let him go, then why only on the basis of the complaint is this happening? Then you also forget the nature of the riots that happened. How Muslims were brought from Deoband and western Uttar Pradesh to burn and kill people. I feel you should concentrate on this instead.”

The full statement by the functionary of the RSS: