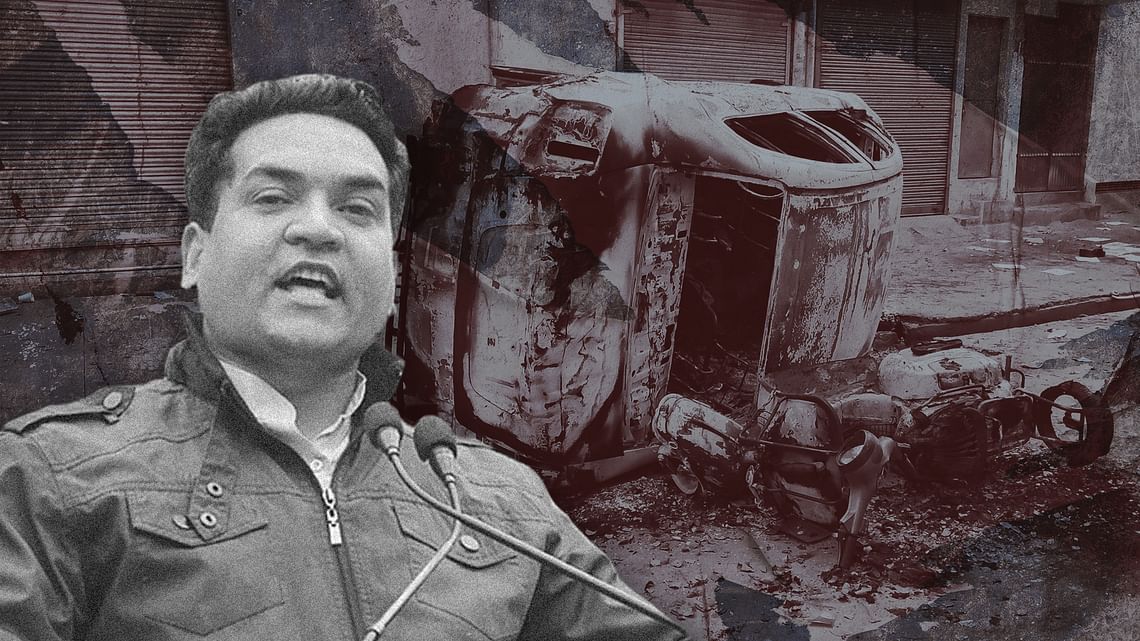 References to BJP leader Kapil Mishra and the RSS pop up in these chats, in between plans to murder Muslims and destroy mosques.

In February this year, communal violence in Delhi killed at least 53 people. The violence began shortly after a provocative speech by the Bharatiya Janata Party’s Kapil Mishra on February 23. In March, Newslaundry had reported that in the aftermath of the carnage, multiple dead bodies were recovered from the drains in Northeast Delhi.

In the murder of Aamir Khan, 30, who was killed along with his brother Hashim Ali, 19, on February 26, the Delhi police arrested 11 Hindu men and zeroed in on a WhatsApp group called “Kattar Hindut Ekta”, a probable typo for “Kattar Hindu Ekta”, which was created on the intervening night of February 24-25 and soon swelled to 125 members. The group name loosely translates to “hardcore Hindu unity”.

The chargesheet claims that the WhatsApp group was created to conspire and kill Muslims and vandalise their properties and local mosques.

The Delhi police said that it apprehended the accused in Aamir Khan’s murder — which includes members of “Kattar Hindut Ekta” — when its officers noticed that three men were “continuously hovering” around the team and trying to snoop on its conversations while it was investigating the murders at the Johripur puliya. Upon suspicion, the men were interrogated and their phones were searched by the officers. That’s when the Delhi police struck upon the WhatsApp group. When it filed the chargesheet, the police had interrogated 12 of the 125 members.

Newslaundry accessed dozens of pages of conversations in this WhatsApp group between February 25 and March 8. These chats are replete with hate, abuse and anti-Muslim slurs. They contain references to the Rashtriya Swayamsevak Sangh and Kapil Mishra, and include plans to torch mosques and install idols, acquire arms, and kill and molest Muslims. Most of these did not find a mention in the Delhi police’s main chargesheet; instead, they were limited to the annexure.

Kapil Mishra, who joined the BJP in August 2019, is a former leader of the Aam Aadmi Party in Delhi. He was elected from the Karawal Nagar Assembly seat on an AAP ticket in 2015. On February 23, Mishra had given an ultimatum to citizenship law protesters in Northeast Delhi. “Till the US president is in India, we are leaving the area peacefully. After that we won’t listen to you [police] if the roads are not vacated by then,” he said at a rally in Jaffrabad.

On the “Kattar Hindut Ekta” Whatsapp group, a media file of Mishra was circulated multiple times. It has been omitted from the Delhi police’s documents, but references appear in text, once with the hashtag #I-STAND-WITH-KAPIL-MISHRA.

“Hear and understand this video of Kapil Mishra and diligently spread it across India because it is 100% in national interest. This is the least you can do friends,” read one message, sent at 10.46 pm on February 26. It was sent again on February 27 and March 1.

Another long message, sent around 9 pm on February 25, defended Mishra from the charge that he had incited the riots. “What did he [Mishra] say except that if the roads weren’t cleared, CAA supporters would also hit the road. This is as constitutional as these rioters who occupy the streets. What is wrong with giving an ultimatum in the name of opposition?”

On March 7, an interview of Mishra with the YouTube channel “Shining India” was shared on the group, where the BJP leader claimed that those opposing the Citizenship Amendment Act were “trying to break India and insult Hindu beliefs and the Hindu tradition”.

Newslaundry reached out to Mishra with a questionnaire for this story. The piece will be updated if he responds.

The RSS, the parent organisation of the BJP, also surfaced a couple of times in the rioters’ WhatsApp group. The most critical mention was at 8 pm on February 25.

Incidentally, 16 people associated with the RSS have been accused in the murder of Parvez, a property dealer in Northeast Delhi’s Gonda. According to his son, Parvez was shot dead in Ghonda at 7 pm on February 25. In response, the RSS claimed that officers in the Delhi police are conspiring against the organisation.

Around 10 pm on February 26, a member of the WhatsApp group asked how he could get in touch with the Bajrang Dal, the youth wing of the Vishwa Hindu Parishad, an RSS affiliate. “Yes brother, if anyone has the number, please share it on the group so we can contact the Bajrang Dal,” another member replied.

The first member repeated the request at 11 pm. At 11.43 pm, a user shared this link: the Facebook page of a Bajrang Dal leader called Rahul Gola from Loni, which is barely a kilometre away from the Johripur puliya.

In the afternoon that day, February 26, a member of the group, who was paranoid about Muslims attacking Hindu homes in Bhagirathi Vihar, suggested that in the event of any trouble, everyone should first call the police, and then inform their “brothers” in the group and those who are associated with the RSS and the Bajrang Dal.

On March 3, a message shared in the group said that all Hindus must join the RSS, Hindu Sena and other organisations to protect the community. “Hindus, support and join RSS, VHP, Bajrang Dal and Hindu Sena. Because when Hindus are in trouble, they’ll be the first to fight for you,” it read.

Newslaundry had earlier reported that on March 4, children living near Johripur had claimed that Muslims were sought out and killed at the nearby puliya during the riots. Conversations in the “Kattar Hindut Ekta” WhatsApp group lay bare how members planned to gather at the puliya to attack passersby. Some would even inform others in the group that they had attacked or killed Muslims.

A man called Lokesh Solanki, 19, who has been arrested for multiple murders, told the group the following at 11.39 pm on February 26: “Brothers, I am Lokesh Solanki from Ganga Vihar. If anyone faces any problems, and if there is a shortage of people, I will come with my entire Ganga Vihar team. We have all the stuff, includings guns and bullets.”

Other members thanked Solanki, saying Gokulpuri and Johripur were “with him”. One member asked if he had any bullets. Solanki said he has pistols.

At 11.44 pm, Solanki confessed murder: “Your brother has killed two Muslims around 9 pm in Bhagirathi Vihar and threw them into the drains.”

Five minutes later, Solanki wrote: “Vinay, you know that your brother is at the forefront when it comes to these things.”

On February 25, Solanki had tried to discipline the group and make them follow his example. “What will you get out of bakchodi in the group? If you want to do something, come out on the roads,” he wrote. “Last night, I roamed Bhagirathi Vihar, Ganga Vihar, Gokulpuri, Johripur and smashed the heads of 23 Muslims.”

This message came around 11 pm, nearly 24 hours after the group was created. One of the first instructions to gather came around 7 am that day, when one member asked “all brothers” to gather at the Johripur puliya at 10 am.

According to the Delhi police chargesheet, the first victim of this gathering was a man named Mursalin, who was killed around 4 pm and thrown into the drain. The second victim was Aas Mohammad, 30, a daily wage worker who was killed around 7.30 pm. After a heavy spell of rain on February 28, Aas’s body surfaced in the drain half a kilometre downstream below Gokulpuri metro station on March 1.

Around 2 pm on February 25, one member in the group specifically targeted Muslim women, saying: “Masjido ki bahan chodo….Jo bahar baithi thi…Mullani unhe chodo.” At 7 pm, they informed each other that the electricity in the area had been cut. “It is dark and all Hindus brothers are ready,” one person texted.

The Delhi police chargesheet says: “On 25.02.2020 at about 7:30/8 pm, rioters cut the electricity and in the dark, they attacked the house of Musharraf, grabbed him and dragged him out into the street and they beat him to death and threw him into the open drain.”

On“Kattar Hindut Ekta”, members kept each other abreast of the latest developments in their areas, especially any news about approaching “Muslim mobs”. “Wherever you face problems, alert us by messaging in the group,” said one message at 7.36 pm on February 25. “And all kattar Hindu brothers carry the stones to the terrace.”

After talking about killing Muslims, one member alerted the group that a local mosque had been set alight. “Swaha ho gayi Masjid,” he wrote. “Jai Shri Ram,” declared another.

Shortly after 8 pm on February 25, one person wrote: “Burn everything that is theirs, just like we torched their madrassa today.” Another replied, “Yes brother, that’s what we are doing.”

The same member made similar plans the next morning. “Brothers, listen, all brothers have to be ready today to attack the Fatima masjid in the evening,” he wrote at 9.45 am.

The night before, the rioters had planned to install an idol in a madrassa that they had destroyed. “This is a request to all brothers,” a member said. “The madrassa in Number 11 that we wrecked today…tomorrow we should unite at 10 am and install an idol inside it.”

When they weren’t discussing murder and arson, members of “Kattar Hindut Ekta” abused and mocked Muslims, shared jokes about the community and Prime Minister Narendra Modi, cursed the AAP and the Congress, and shared poems and other forwards on Hindu victimhood.

“Muslims told Modi, ‘remove the police for 10-15 minutes, not one Hindu would survive’,” began one message that was shared multiple times. “So Modi said: ‘I did remove them for 7-8 minutes in Gujarat, now you’re only 10% there’.”

Another message outlined how Hindus were responsible for their poor state. It read: “The situation is such that Modi today stands up for Hindutva, and delusional Hindus are bent on erasing it. We’ve seen lakhs of Hindus oppose Modi, but tell me just one Muslim who opposes [Asaduddin] Owaisi.”

On AAP, members talked derisively about those who voted for the party out of greed for freebies. “Brothers, even some Hindus turned greedy and voted for AAP. They didn’t know that that fucker is up the Muslims’ ass” said one member. Another replied, “They’ll give free electricity and water to those fuckers.”

YouTube videos of one Nitin Shukla were shared widely on the group, including one “exposing” journalist Rana Ayyub, and another on “biased reporting” by ABP News. Members of the group also forwarded messages about journalists like Barkha Dutt and Ravish Kumar and their so-called biased reporting.

The police also made a cameo in the chats, notably when the members were discussing self-preservation by deleting incendiary videos on their phones, especially one where a pro-Citizenship Amendment Act protester was seen torching a Sufi shrine. “The police just came to my lane. They said we should not keep such videos in our phones,” read one message, as others agreed.

According to the Delhi police chargesheet: “All these persons were angry with the Muslim community due to the riots in Delhi. He [Solanki] along with his team members/friends had hatched a criminal conspiracy and planned to take revenge from the Muslims for killing Hindus and for destroying/burning their properties.”

Solanki, along with the 10 other accused, have been booked under a dozen sections of the Indian Penal Code, including murder, dacoity, criminal conspiracy and rioting.