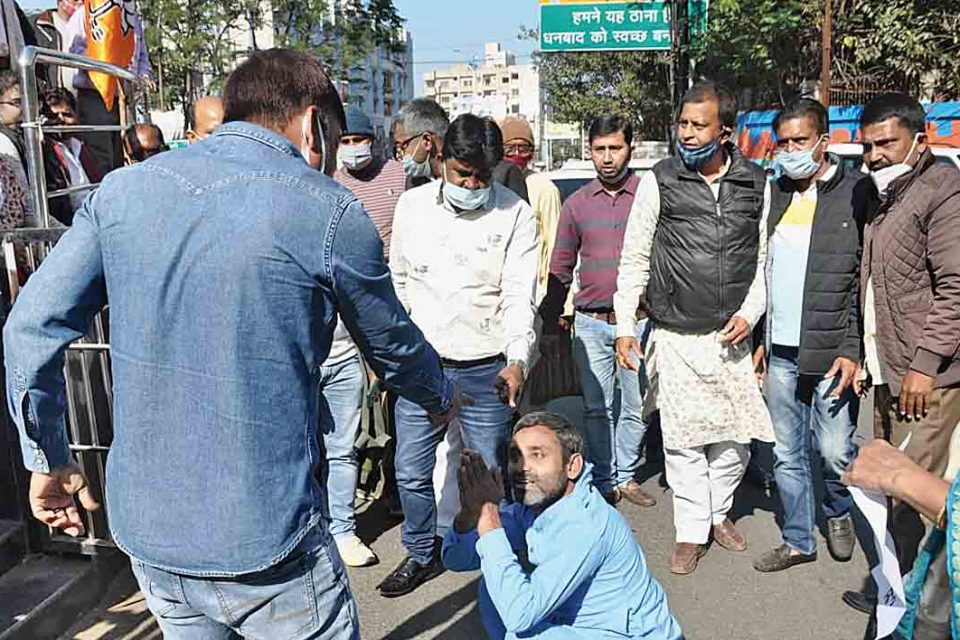 A Muslim youth was allegedly forced to chant “Jai Shri Ram” and lick his spit on a Dhanbad road, his family claiming the perpetrators were participants at a BJP protest against the “security breach” faced by Prime Minister Narendra Modi in Punjab.

Two men were arrested on Saturday for Friday evening’s attack on Zeeshan Khan, 32, who was described by younger brother Rehan as suffering from “manic depression” and prone to “mood swings”.

He said the police were looking for the other accused named in the FIR by Rehan — Jayant Singh Chaudhary, Pintu Singh, Bablu Sahai and Tamal Rai — and any others they could identify from a video.

The video, which had been uploaded on Twitter and tagged to the Jharkhand chief minister’s handle, shows a man being thrashed and forced to lick his spit, do squats and chant “Jai Shri Ram”.

Dhanbad MLA Raj Sinha, who was at the BJP sit-in along with Dhanbad MP Pashupati Nath Singh, alleged a “conspiracy to disturb a peaceful silent protest by the BJP”.

“We saw a youth appear suddenly and hurl expletives at us and threaten to kill state BJP president and MP Deepak Prakash. We shoved the youth away. I don’t know what happened after that,” Sinha alleged.

Rehan told The Telegraph that Zeeshan was a student of engineering enrolled with an institute in Chennai. He had for the past few years been under treatment for “manic depression”.

“Because of his mental condition and mood swings, we usually keep a watch on him when he steps out. I don’t know how after the namaz yesterday he went to the City Market roundabout (around 2.5km from his home in Wasseypur),” Rehan said.

“It’s possible that he had suffered a mood swing and said something, but he could have been handed over to the police. I lodged a police complaint to ensure that such things don’t happen with other minority youths.”

“Kindly probe the incident and while taking stern action against the guilty, inform me about it. There is no place for such animosity in Jharkhand where people live in peace and harmony,” Hemant had tweeted in Hindi and tagged the Dhanbad district administration.

Dhanbad sub-divisional officer Prem Tiwari said a report had been sought from the Dhanbad circle officer on whether the BJP had sought permission to stage the protest. If not, a case may be lodged for violation of Covid guidelines.

The FIR invokes penal code sections 153A (promoting enmity between groups on grounds of religion), 307 (attempt to murder) and 328 (forcing someone to ingest something harmful to their health, in this instance, spit from a road).

Jharkhand has witnessed several lynchings of Muslims in the past six years. Many Muslims have been publicly humiliated, like Zeeshan, by vigilante mobs.

A bill against lynching that the Jharkhand Assembly passed last December is awaiting the President’s assent.

Note: This news piece was originally published in thetelegraph.com and used purely for non-profit/non-commercial purposes exclusively for Human Rights objectives.