The body of a 19-year-old Dalit woman who was gangraped and murdered allegedly by four men in Hathras, Uttar Pradesh, was cremated by police at 2.45 am on Wednesday despite her family’s protest. The body of the Dalit woman who was gangraped and murdered allegedly by four men in Hathras, Uttar Pradesh, was cremated at 2.45 am on Wednesday.

The victim’s family said the UP Police forcibly performed the last rites despite repeated requests to bring her body back home one last time.

The victim’s body was finally released from the Safdurjung Hospital in Delhi at 10.10 pm on Tuesday, police confirmed to India Today TV.

Earlier in the day, the father and brother of the Hathras gangrape victim sat in protest outside the hospital claiming that her body had been taken away without their permission.

They were joined in protest by workers from Congress as well as the Bhim Army. As the crowd at Safdurjung Hospital swelled, security was heightened at the hospital.

Delhi Police later claimed that the family was not sitting on a dharna and said that the issue was “hijacked by different groups”.

“They wanted to go. Different groups tried to hijack the issue. Later, the family was convinced and they left with SDM and Circle Officer of Hathras. ADM Hathras was also there,” the Delhi Police later said.

There were heated arguments between the protestors and the police personnel outside the hospital.

BODY ON WAY TO HATHRAS, POLICE CALLS FOR HASTY CREMATION

The body of the victim reached Hathras amid heavy police deployment.

The UP Police also took the victim’s family back to Hathras from Delhi and asked them to cremate the body overnight.

According to reports, the police had already set up a temporary pyre near the victim’s home and was trying to convince the family to cremate the body as soon as possible.

Leading the protests outside Delhi’s Safdarjung Hospital, Bhim Army chief Chandrashekhar Azad said he appealed to all members of the Dalit community to take to the streets and demand death penalty for the guilty. 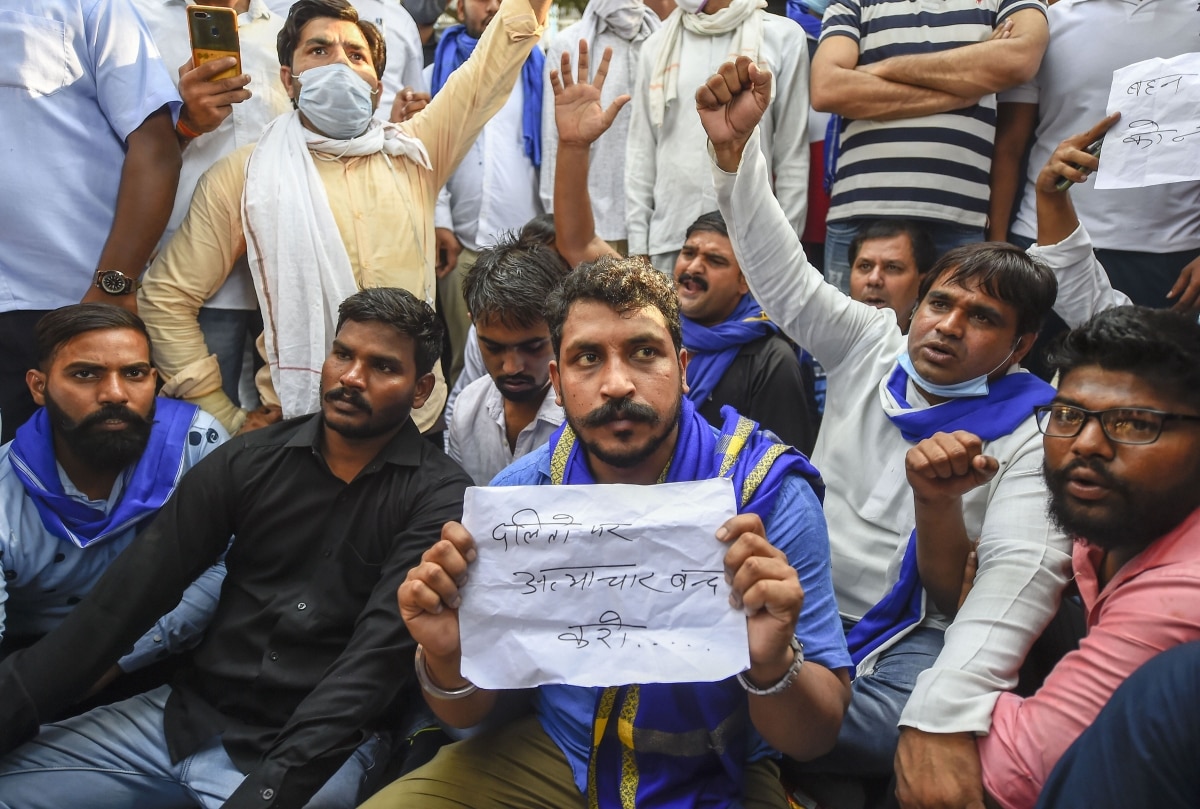 “The government should not test our patience. We won’t rest until the culprits are hanged,” he said as restless crowds milled around the complex.

Azad, who had earlier demanded that the Uttar Pradesh government shift the woman to the All India Institute of Medical Sciences for better treatment, held the state government “equally responsible” for her tragic death.

The woman, who was brutally gang-raped in a village in Hathras district two weeks ago, died of her grievous injuries at the Delhi hospital Tuesday, prompting outrage, protests and calls for justice.

The four accused had tried to strangle her to death as she resisted their rape attempt and in the process, she also ended up biting her tongue and suffering a severe cut on it. The accused have been arrested.

She was admitted to Aligarh Muslim University’s Jawaharlal Nehru Medical College and Hospital in a critical condition and shifted to Safdarjung Hospital on Monday after her health worsened.