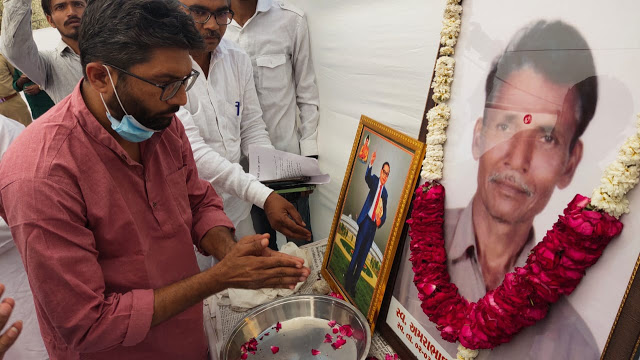 Claiming to be harassed and humiliated by upper-caste men, Gujarat Dalits, forming about seven per cent of the state’s six crore plus population, appear all set to begin a fresh move to gird up their loins to take on the “oppression” they have been facing under the BJP rule.

Some 2,500 Scheduled Caste (SC) men and women from all over the state flocked to Sanodar village in Bhavnagar district on March 14 to offer their condolences to a fearless fellow farmer who was hacked to death by headstrong Darbars on March 2, and vowed to stand up and be counted.

Though a strongly-worded memorandum demanding one-acre land and lifetime pension for 50-year-old Amrabhai Boricha’s family was handed over to the district police chief immediately after the prayer meeting, the demands were repeated at another large gathering of the socially-disadvantaged community at Sanand, 22 km from here, on March 20.

On March 22, Dalits, seething with anger over Boricha’s daylight brutal murder inside his own house by ten forward-caste men with swords, spears and steel rods, assembled at the Bhavnagar district collector’s office to submit another memorandum of demands, including a licence for a revolver for protection of the lone Dalit family in the one-horse hamlet.

Jignesh Mevani, independent legislator, known to be the Dalit face of Gujarat, raised the murder issue in the legislative assembly last week asking why the negligent and irresponsible police sub-inspector, an accused in the case, had not been collared so far but the lawmaker was ordered to be forcibly evicted from the House and suspended by the Speaker.

Come April 14, Ambedkar Jayanti, some 3,000 Dalits who have been harassed by high-caste fellow citizens, plan to take out a Lalakaar Yatra (Challenge March) to indicate that they will no more take caste Hindus’ torture lying down but will take on the tormentors.

“On April 14, we will take out the rally and will try to get the possession of 14 land parcels in Gujarat which have been allotted to landless Dalits but have been wrongfully occupied by upper-caste people,” Mevani told this journalist.

After all, at the root of the savage attack on Boricha, a right-to-information (RTI) activist, was his constant complaints to the police against Darbars’ frequent attempts to usurp his land and house for which the Dalit activist was assaulted as many as 13 times, thrice in the presence of policemen.

Dalit gathering in Bhavnagar in memory of Boricha

“Boricha had been receiving death threats for the past seven years but despite his demand for armed policemen at his home, only two baton-carrying guards were provided to him with the result that the goons carrying sharp-edged weapons gate-crashed into his house and killed him,” revealed Niru Chorasia, Bhavnagar district coordinator of Navsarjan, an Ahmedabad-based NGO working for Dalit rights.

According to Kantilal Parmar, social worker and human rights activist, the failure of the state government to provide protection to Dalits has led to the murders of 688 of them, besides 2,500 other crimes like rape, robbery, violent attacks, etc. ever since the anti-atrocities Act came into force in 1990.

“A 2017 circular of the Vijay Rupani government promising pension, employment and land to the bereaved families of SC has only remained on paper,” said Parmar, adding, targeted Dalits are either done to death or are forced to migrate to “safer” places.

While RTI activist Sanjay Ezhva opined that the Gujarat government has completely failed to provide security to anyone who is a conscious citizen, Dalit Adhikar Manch convener Kirit Rathod said, Boricha’s murder has angered the SC community and the saffron-ruled state is sitting on a tinderbox of Dalit unrest.

Top RTI activist Pankti Jog, convener of the Mahiti Adhikar Gujarat Pahel, said that Boricha had to sacrifice his life because under the RTI Act, the state government was obliged to disclose panchayat funds details he had sought in 2013 but did not do its duty and, consequently, the whistleblower was beaten up by panchayat office-bearers.

There have been reports that, like Boricha, many Gujarat Dalit right activists from Kutch, Botad, Banaskantha and Gir Somnath districts also have been facing death threats, but are yet to be given police protection.

Asserts Mevani: “The fact that Boricha was assaulted as many as 14 times shows that there is absolute blatant disregard for the rule of law in Gujarat as if the Constitution has gone for a six in the Rupani regime which, strangely, calls itself a sensitive administration.”