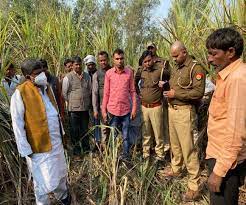 Ayodhya, Jagran Correspondent. Sensation has spread in the area due to the murder of a 20-year-old Dalit girl in Geroda village of Patranga police station. After killing the girl, her half-naked body was thrown in the sugarcane field. The incident came to the notice of relatives at nine o’clock in the morning, when people came to work in the field.

The girl had disappeared from the house a day earlier under suspicious circumstances. Since then the family members were worried. Despite a search, he could not be traced. Suddenly there was panic in the village after the girl’s body was found. Everyone ran towards the sugarcane field. SP Rural Atul Sonkar and CO Surendra Tiwari reached the spot and started investigation into the incident.

Regional MLA also reached the spot: MLA Ramchandra Yadav also reached the spot after getting information. Condoled the bereaved family members and instructed the police to unveil the incident at the earliest after conducting a fair investigation. SHO Vivek Singh said that the exact reason behind the murder would be clear only after the post-mortem report comes. The complaint has not been received yet. After receiving the complaint, a case will be registered.

Note: This news piece was originally published in jagran.com and used purely for non-profit/non-commercial purposes exclusively for Human Rights objectives.