According to PUCL activists, the family is fearful of the day their CRPF security cover is revoked. 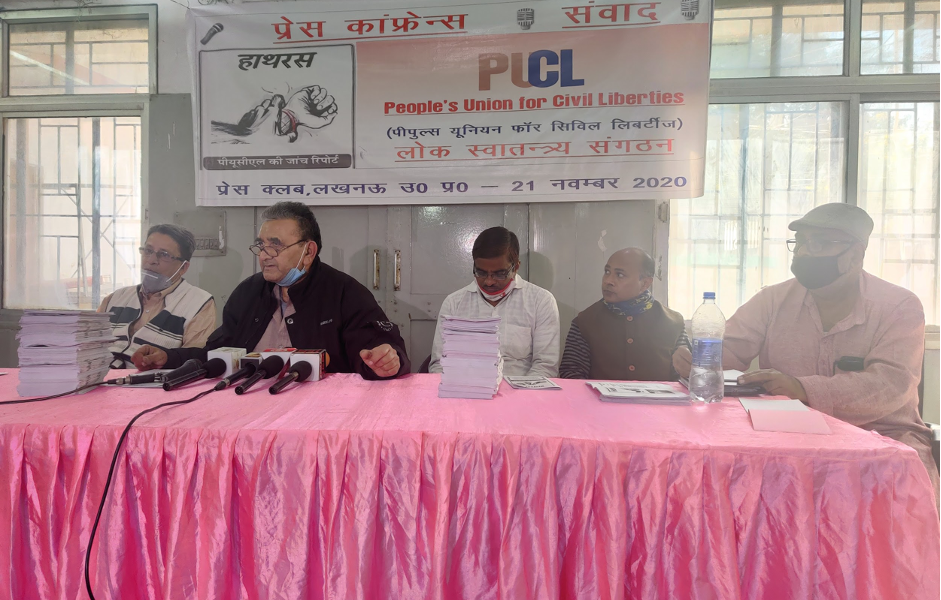 Lucknow: The PUCL (People’s Union for Civil Liberties), Uttar Pradesh on Saturday in a press conference claimed that members of the Hathras gang-rape and murder victim’s family are living in conditions similar to a house arrest. The family has also expressed fear for their lives once the CRPF cover given to them is withdrawn.

Kamal Singhi, a member of the PUCL, said, “When we went to meet the family, it seemed like we were going to meet a terrorist in his cell and not the family of a horrifying rape victim.”

The civil rights body has released a report on the Central Bureau of Investigation probe on the Hathras case. The Dalit victim of a gang-rape allegedly by four Thakur men died on the morning of September 29. The victim’s body was burnt by the UP administration in the wee hours of the morning of September 30, without the family’s participation or consent. The case led to outrage across the country.

However, about two months later, the investigation in the case is still not complete. The press release by PUCL read, “The victim family is still not assured despite the CBI investigation. The whole family is in a kind of house arrest. Their normal social life is cut off. Family members are afraid for their lives.”

A team of PUCL members including Kamal Singh, Farman Naqvi, Alok, Shashikant and K.B. Maurya had visited Boolgarhi village in Hathras, where the incident occurred. They met the victim’s family and released a report highlighting points regarding the CBI investigation done so far in the case.

The report, titled ‘A Black Story’, says that arrangements should be made for the rape victim’s family’s rehabilitation and that the promise of a government job to one member of the family should be immediately fulfilled.

Kamal Singh said the family is worried about what will happen once the CRPF protection is withdrawn. He said, “The victim’s father has told us that he would send his sons outside to work, rather than stay in this village for security reasons. We are also concerned for the family’s safety because the nexus between the local administration, the police as well as the upper caste members of the village will go back to how it was before. I am worried for the day that the security will be withdrawn.”

He also added that a striking detail has come out during their visit to the victim family. “The complainant had actually gone to the police station on September 17 – five days before the police claims the victim mentioned rape for the first time, to give them a written complaint mentioning this inn detail. The complaint was taken by the police officers but was buried.”

He then added that the role of the police must also be investigated by the CBI. “The scope of the CBI investigation should be increased and the police officers who neglected this case should also come under the scanner. They made comments that it was not rape and burnt the body in the wee hours – all of this should be investigated.”

The group also said that the allegations made by UP police on four people including journalist Siddique Kappan who had been arrested in Mathura on their way to Hathras last month were simply to divert attention from the matter. The cases lodged against people charged with inciting violence during the incident are currently being probed by the UP Special Task Force (STF). The group said that these should instead be brought under the ongoing CBI investigation.

Farman Naqvi, another member of the PUCL and an advocate, trying to link the Popular Front of India with the case was done to create a Hindu-Muslim divide. “If the PFI is a radical Islamist organisation, why don’t they ban it?” he asked. He also said that the four arrests were made by the government to hide their own failure in dealing with the Hathras case.

Alok Anwar, another member of the PUCL, said that the four men are being illegally detained and must be released immediately. “They are not allowed to meet their families or lawyers. Nobody knows what condition they are in,” he added.

Singh said that the group, when they visited the village, were afraid that they might have also been incriminated the same way as the four arrested last month. He also claimed that the government was protecting the district magistrate, Hathras, in light of a video that had gone viral on social media where he can be seen threatening the family members of the victim. “Why is there no action against him for threatening the family members of the victim, telling them what will happen once the media leaves, asking them if they wanted the compensation amount or not? That the administration is protecting him is clear.”

The members also said that the character assassination being done of the deceased as well as her family must not go unpunished.