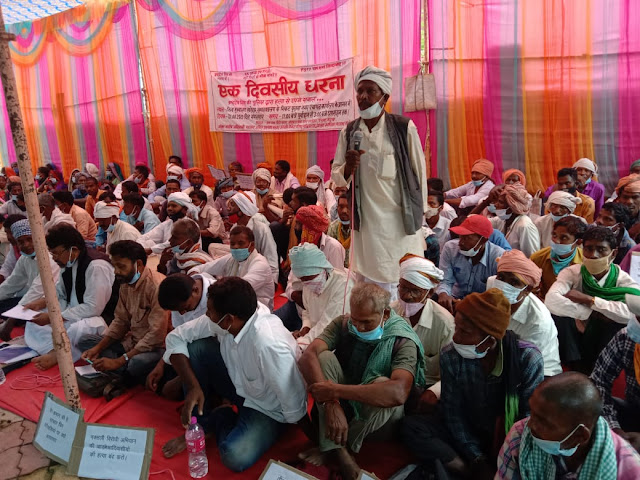 By Our Representative
Hundreds of people of Piri and nearby villages (Latehar district, Jharkhand) and representatives of several people’s organisations have protested at the Latehar district headquarters against the killing of Piri’s Adivasi youth Bramhadev Singh allegedly by security forces.
The dharna was organised by the Piri Gram Sabha with the support of several organisations – Akhil Bhartiya Adivasi Mahasabha, Akhil Jharkhand Kherwar Janjati Vikas Parishad, Jharkhand Janadhikar Mahasabha (JJM) and the Sayunkt Gram Sabha (Latehar, Palamu, Garhwa).
On June 12, 2021, security forces, out on a Naxal search campaign, reportedly opened fire on innocent Adivasis of Piri village (Garu, Latehar) during which Bramhadev Singh was shot dead. Adivasis including Bramhadev were going out on a traditional hunting ritual, as every year, for the Sarhul festival. They all carried the single-fire Bhartua gun which is used to hunt small animals and birds like rabbits, pigs and chickens and to protect crops from animals.
The villagers did not fire a single shot, a communique from JJM said, adding, they raised their hands and shouted that they were common people and not Maoists. Yet, the security forces kept on firing. Instead of booking the perpetrators for the murder of Bramhadev Singh and violence, the local police filed an FIR against the six victims, including dead Bramhadev Singh, under various sections including Arms Act. Despite repeated applications by Bramhadev’s wife and villagers to the police and administration, an FIR against security forces responsible for killing Bramhadev is yet to be filed. 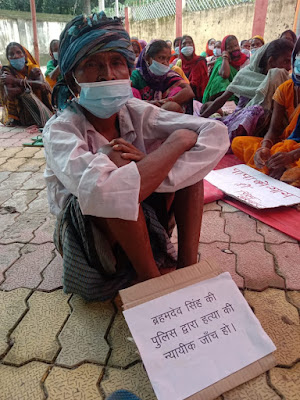 At the end of the dharna, the organisers submitted a letter addressed to the chief minister to the deputy commissioner with the following major demands: