A study has reflected the layers of caste and gender discrimination, harassment and disbelief that survivors have undergone in the hands of Uttar Pradesh police. 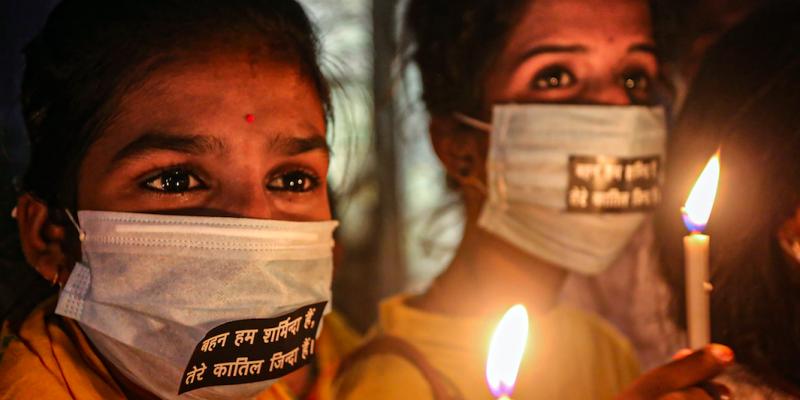 On September 28, a day before the 19-year-old from Hathras succumbed to grievous injuries in Delhi’s Safdarjung Hospital, two organisations in Lucknow released a report which shed light on the attitude of Uttar Pradesh police towards women who are survivors of sexual violence.

The Commonwealth Human Rights Initiative (CHRI) and the Association for Advocacy and Legal Initiatives (AALI) released a report titled Barriers in Accessing Justice, based on the experiences of 14 rape and gang rape survivors in Uttar Pradesh. The findings of the report reveal how difficult it is to register an FIR over such cases in UP even today.

Chances that action would be taken against the accused are even slimmer. The police even humiliate, discourage and harass women and girls battling sexual violence in the process of the FIR registration.

In this report, 14 cases of sexual violence reported from Aligarh, Amroha, Auraiya, Lucknow, Jhansi, Jaunpur and Muzaffarpur were studied. Of the cases profiled, 11 were complaints of rape and three were complaints of gang rape. All of these incidents were reported between 2017 and 2020, except one which took place in 2016. A protest against the Hathras rape. Photo: PTI

Several days’ worth of delays

The report suggests that in an attempt to register an FIR, the woman who had suffered the trauma of the sexual assault, also had to face discrimination based on gender and caste from the police. In five cases out of 11, the FIR was registered after the court’s order.

In the Indian Penal Code (IPC), all sexual offences, also known as gender-based offences, are considered cognisable. It is mandated by law for the police to immediately file FIRs in complaints of sexual offences. As per 166A(c) of the Criminal Law (Amendment) Act 2013 in April 2013, if a public servant does not register an FIR for sexual violence, he or she can be punished with imprisonment and fine.

The study found that the police initially disbelieved the woman’s complaint in almost all cases. The women said that the police taunted them and pressurised them to compromise with the accused. They were told that they were fabricating the claims to implicate men, taking unfair advantage of the law. Dalit women survivors of sexual violence faced caste-based, in addition to gender-based, discrimination.

When a Dalit domestic worker reached the police station to register her complaint in Aligarh, the officer in charge remarked, “You are not so beautiful that someone will harass you.”

In Amroha, a 19-year-old girl was raped by her neighbour. When the survivor, along with her father, went to the police station, to register an FIR, the SHO told them, “This is a matter of the community, you get both of them married. Registering a case at the police station is of no use.” 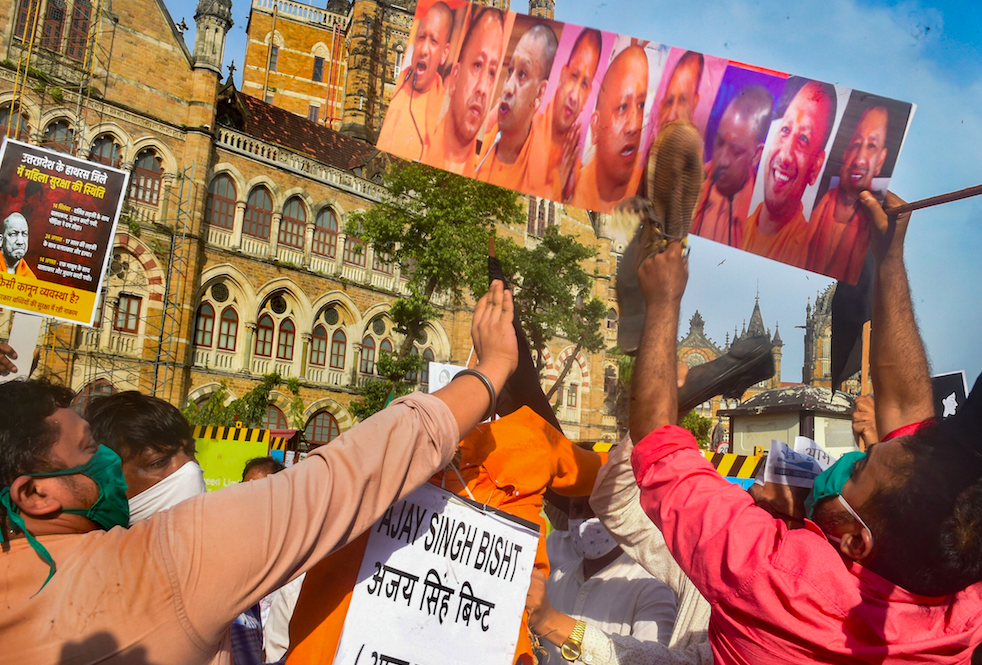 Protests against the Hathras brutality in Mumbai. Photo: PTI

Under pressure from the village panchayat and the police, the survivor was forced to marry the perpetrator who did not bring her to his home and forced her to live with his uncle who sexually harassed her. One and a half months later, the uncle dropped her at a bus station telling her he will return soon, deserting her. The survivor found her way back to her parents’ home. The survivor and her father then went to the SP. After the SP intervened in the matter, an FIR was finally registered 111 days after the incident but the police did not arrest the accused even then. The survivor and her father then met the DIG. To create pressure on the survivor’s father to settle the case, a case was registered against him by the local police.

In Lucknow, a domestic worker was raped by a close relative in December 2017. When the survivor narrated her ordeal before the SI, he told her that she was narrating a false complaint and so the case would not be registered.

Also read: Being True to this Daughter Means Confronting the Caste System in Her Rape and Murder

In a case of gang rape in a moving car in Auraiya, the police told the 25-year-old survivor, “Some dispute must have taken place. The person whom you want to register a case against is a government servant so I won’t register your complaint.”

In Jaunpur, a 23-year-old woman was kidnapped and gang raped on December 10, 2017. She escaped and returned home after six days. The survivor and her father went to the police station, but could not meet the station head officer. This continued for the next 2-3 days. When they finally met the SHO, he asked them, “Where were you all these days?” No FIR was registered.

With the help of a lawyer, the survivor and her father filed an application under Section 156 (3) CrPC in the court of the Chief Judicial Magistrate. The Magistrate ordered the police to register the FIR. Subsequently, when the survivor’s father went to the police station after a couple of days, the SHO made offensive remarks saying, “Earlier you were making your daughter solicit, and now you are coming here to file a complaint.” An FIR was finally registered in the matter after 40 days.

In almost every case, women survivors of sexual violence had to face derogatory remarks from police officers.

A Dalit woman was allegedly raped at her home in Lucknow on October 17, 2016. On October 18, she went to the police station to get an FIR registered. But she was unable to meet the SSP as he was not present. At the police station, the survivor met the SI. After listening to her ordeal, the SI accused her of lying and said, “You are coming here with a fake case, women make up such cases all the time.”

In this case as well, an FIR was eventually registered under Section 156 (3) of CrPc on the court’s order.

The report states that the survivors and caseworkers did not know about the provision of Section 166A (c) of the IPC under which punitive action can be taken against police personnel for not filing an FIR in a case of a sexual assault. On hearing of this possibility, they said that complaining against police would lead to repercussions for them.

The survivors unanimously shared that the failure of the police to register the FIR in the first instance caused suffering, helplessness, and confusion with serious impact on their physical and mental wellbeing.

The report states that bias and discrimination against women exists in all ranks of the police department and is a prime factor that perpetrates the denial of women’s legal rights.

Also read: UP Police Officers Must Be Investigated for Attempting to Shield Hathras Accused

As per the report, CHRI and AALI believe that an integral starting point would be for justice institutions, beginning with the police, to respond within a frame which is survivor-centric and trauma-informed. This frame would ease the difficult process of reporting sexual violence to the police and seeking registration of cases for all survivors.

The two organisations found in the case studies that there was no information available about action taken against police officers who did not register FIRs of sexual offences. 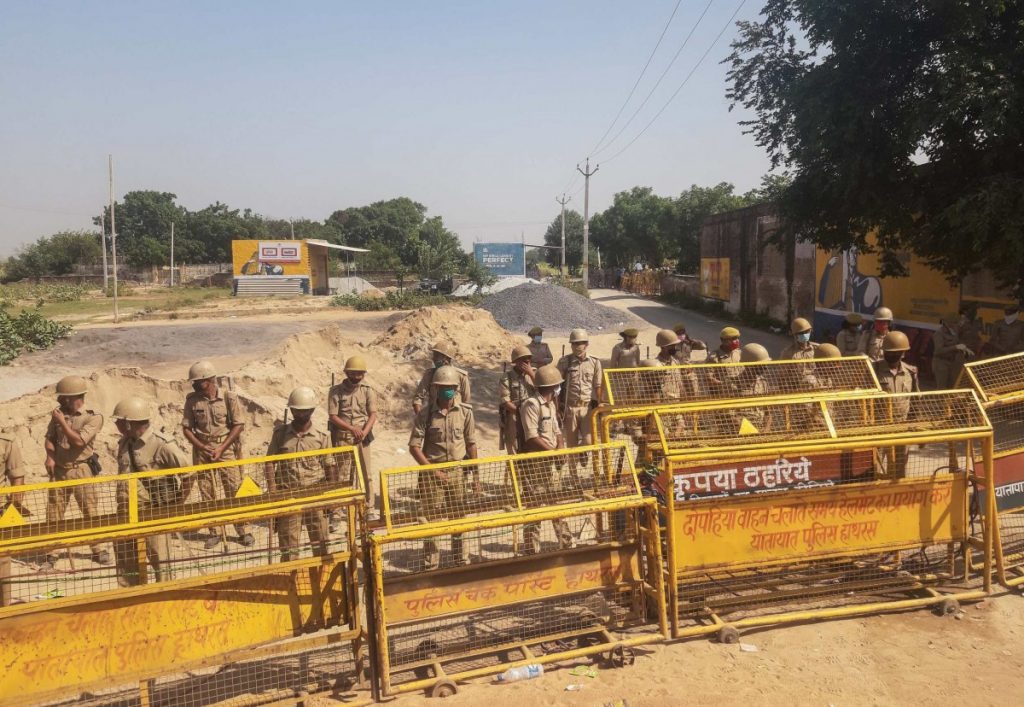 Therefore, it was recommended to collate and publish the number of FIRs, state-wise, registered against police officers for non-registration of cases of sexual offence and carry out a comprehensive national review. The report also recommended that the National Crime Records Bureau should revive, from this year, the state-wise break up of data on the nature and number of oral and written complaints received by the police and the subsequent number of cases registered under the IPC and special laws in the annual Crime in India report. It was recommended that the statistics are made available not only state-wise, but also district-wise.

The report emphasised the need to bring the data on cases against police officers in the public domain. It urged the members of parliament to regularly ask questions on the total number of cases registered, state-wise, against police officers for non-registration of FIRs in cases of sexual offences under Section 166A (c) of IPC. It also asked the National and State Human Rights Commission to ensure any specific complaints of non-registration of FIR in cases of sexual offences are specifically collated and reported in Commissions’ annual reports.

The study also shared the experience of case workers providing help to women and girls who have suffered sexual violence. The caseworkers unanimously asserted that the police attitude and behaviour towards survivors was highly prejudiced, derogatory and discriminatory. In almost all cases, the police either delayed or refused to register an FIR. It was surmised that the police are under pressure to show that crime is not rising in their jurisdiction.

Also read: What the UP Police Hopes to Gain With Its ‘No Evidence of Rape’ Claim in Hathras Case

The caseworkers asserted that in 12 out of 14 cases, the survivors had to describe the details of sexual assault to a male police officer instead of a woman, contrary to the process laid down under Section 154 of the Code of Criminal Procedure.

As per the report, the caseworkers observed that the role of women police personnel in police stations is very limited.

What does this delay mean for the investigation?

The report concludes that delay by the police in registering an FIR and initiating the process of investigation, often unaccounted for during the trial, not only has implications on the evidence but also creates windows of opportunity for the perpetrator to threaten and harass and sometimes even repeat the sexual violence.

AALI’s Shubhangi Singh says that non-registration of an FIR immediately after receiving a complaint in a case of sexual violence delays in collecting medical and forensic evidence and weakens the case. She says, “Fourteen cases were studied in the report in all of which it was found that caseworkers provided legal aid to the women survivors of sexual violence. Yet, there was so much delay in filing an FIR. You can understand how difficult it must be for women and girls who do not have access to any legal aid, to get an FIR registered given the attitude of the police.” In the Hathras incident, the police registered a gang rape case a full eight days after the incident and arrested the accused thereafter. The UP police have now claimed that there is no evidence of rape.

From the video of the 19-year-old Dalit girl from Hathras which was recorded while she was battling for life in the hospital, one finds that an attempt to sexually assault her was made earlier too. On September 14, she was attacked the second time.

Despite the statements of the girl and her family, and the evidence, an FIR was registered in the Chandpa police station, Hathras, after eight days. Evidently, the police did not comply with the mandated procedure in registering the FIR and criminal proceedings punishable under 166A (c) should be invoked against them.

Now, according to the recommendations of the SIT, the government has called for a narco test of the victim’s family.