The couple had gone to Jabalpur collector’s office to register their marriage. Police say they haven’t filed a case as the girl’s mother doesn’t want to pursue the matter. 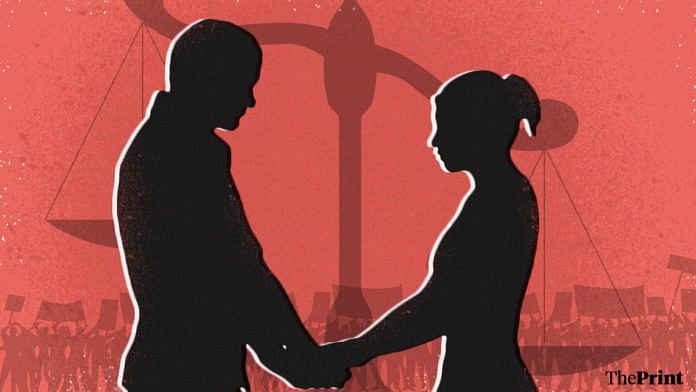 Bhopal: An interfaith-couple seeking to register their marriage in Jabalpur, Madhya Pradesh, was allegedly harassed by members of two Hindu groups Monday.

The man, in his early 20s, and the woman, 18, had come to the collector’s office in Jabalpur to apply for registration of their marriage when some male members of Hindu Dharmasena and female members of Sanatan Vahini, who were waiting for them after receiving a tip-off, allegedly accosted the couple.

The girl told reporters outside the collector’s office that she was marrying out of choice.

“I know he is a Muslim. I love him and am doing it willingly,” the girl said, adding that she had already completed 18 years and will celebrate her next birthday in three months.

She also told reporters that her family did not know of the marriage.

The members of the Hindu groups alleged that the man tried to flee from the spot, but they caught and handed him over to the police.

The police arrested him under Section 151 of the CrPC and asked the girl to return to her parents. He was released on bail after a few hours.

Shivpratap Singh Baghel, the in-charge of Omti police station,  told ThePrint that the man was detained on apprehension that he could create disturbances.

Asked to share more details about the case, Singh said he would talk after half an hour, but he did not take calls from ThePrint later.

Jabalpur Superintendent of Police Siddharth Bahuguna said they haven’t registered a case yet as the girl’s mother did not want to pursue the matter. “We will do whatever is legal,” he said.

Calling it a case of forced conversion and “love jihad”, Hindu Dharmasena chief Yogesh Agrawal told ThePrint the girl had been trapped by the Muslim man.

“The organisation will persuade the girl’s mother to register a case against the man after the new anti-conversion law comes into force,” he said.

Agrawal claimed the girl had converted and the couple had a nikah recently.

Lata Singh Thakur, who claimed to be the national spokesperson of Sanatan Vahini, told reporters outside the Jabalpur collector’s office that the man tried to flee from the spot, but was later nabbed by them.

“I want to tell parents that it’s not good to be so liberal with daughters. They are so many scandals involving Muslim men who lure Hindu girls, marry them, convert them and abandon them,” she said.

The incident took place on the day when Chief Minister Shivraj Singh Chouhan announced that his government will promulgate the Madhya Pradesh Freedom of Religion Ordinance, 2020.

The BJP government could not pass the bill earlier because the Winter Session of the assembly was cancelled due to the Covid-19 pandemic.

On Tuesday, the Chouhan cabinet cleared the ordinance and sent it to Governor Anandiben Patel for approval.

Conversion through marriage or by any other fraudulent means will attract prison term and fine under the proposed law.

Speaking to reporters in Bhopal Tuesday, Home Minister Narottam Mishra said many cases of conversion for marriage are coming to light.

Referring to an incident of an interfaith marriage case reported from Kolar in Bhopal Monday, the home minister said he has ordered a probe into the matter.

“If our probe bears it out, our attempt will be to register it as the first case under the new law,” he said.

The case the home minister was referring to involved a Hoshangabad resident, who allegedly married a Hindu girl by changing his name from Mohammed Rafiq to Ravi Yadav.

When the couple was preparing to tie the knot at a temple in Kolar, members of some Right-wing organisations stopped the marriage.

A case of cheating was registered at the Kolar police station and the case diary was sent to Raisen police as the girl lives in Mandideep area in Raisen district.