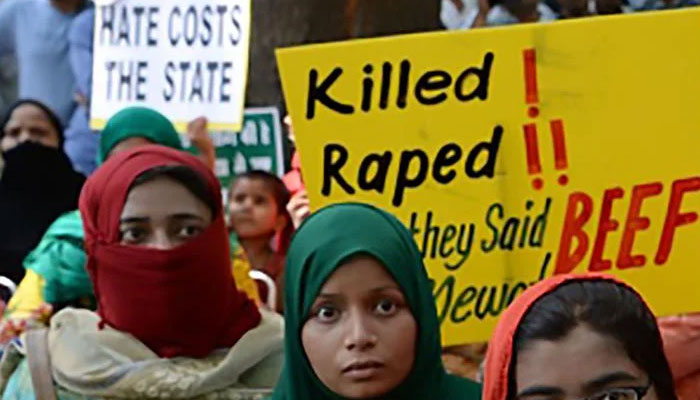 ISLAMABAD: As the world observed the International Human Rights Day on Friday, the Narendra Modi government in India continues to indiscriminately target the minorities with over 300 attacks in the first nine months of this year against Christians, making the country one of the worst for the community to live.

Be it is the Muslims, Sikhs, Christians, or Dalits, the Hindutva mindset is poised to the cleansing of all non-Hindu communities not only through policy measures but also the use of force through RSS goons.

In September this year, Pakistan had issued a 132-page dossier on Indian war crimes in IIOJK which contained reports of 32 human rights watchdogs and 14 reports by Pakistan. According to the document, since 1989, over 96,000 extra-judicial killings, around 162,000 cases of arbitrary arrests and torture, over 25,000 pellet gun injuries were recorded. Moreover, 11,250 women were raped, around 23,000 widowed and over 108,000 children orphaned. The document also provided details of the 8,652 unmarked mass graves that have been identified in 89 villages of the IIOJK.

According to a report by the Religious Liberty Commission report, more than 300 attacks on Christians took place in the first nine months of this year, including at least 32 in Karnataka. Four north Indian states registered as many as 169 of them: 66 in BJP-ruled Uttar Pradesh, 47 in Congress-ruled Chhattisgarh, 30 in tribal-dominated Jharkhand, and 30 in BJP-ruled Madhya Pradesh.

The Christians are blamed for converting Hindus into Christians and that also considered to be changing the character of India. At least nine Indian states have planned anti-conversion laws, including Chhattisgarh, which is termed a new laboratory for anti-Christian hatred in India. Since the Hindu nationalist BJP took power in 2014, persecution against Christian and Muslim minorities has been on the increase across the country, and today, it’s one of the worst countries in the world to be a Christian.

According to local observers, the acts of violence facing Christian communities are part of a concerted campaign to inflame tensions in a bid to justify new laws restricting their worshiping activities.

According to the World Watch List by Open Door, In India, it can be difficult for some Christians to gain access to the Bible. Some Christians cannot read, and others live in places where reading a Bible publicly can lead to attacks or heavy persecution. This is the third year since 2019 that India has ranked in the top 10 of the World Watch List. Indian Security Forces operate with pretty much impunity in IIOJ&K.