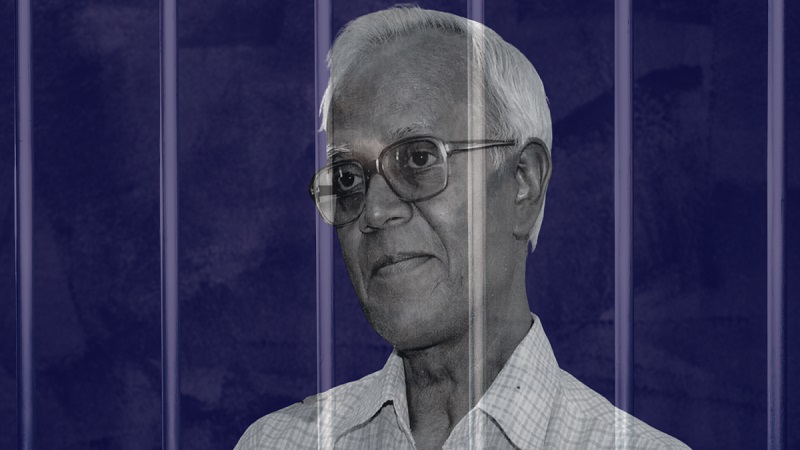 Shortly after the death of Fr Stan Swamy, supporters and family members come together to remember the man one last time and denounce the callousness of authorities

Bidding goodbye to Jharkhand Adivasi activist Father Stan Swamy, the Jesuits in India hosted a condolence meet in honour of the 84-year-old personality on June 5, 2021.

“In his death we have lost a courageous, compassionate elder brother. He is an example of us Jesuits to become effective Jesuits,” said Jesuits of India Head Father Stany D’Souza remembering Fr. Swamy.

Many people during the event described Fr Stan as a person, who embraced simple life and worked tirelessly for poor people. Even when he was deprived of his basic rights in jail, Fr Stan continued to fight for the poor and saw Jharkhand Adivasis as his true family. This made his death at Holy Family Hospital, away from his Adivasi brethren, all the more hurtful for his supporters.

“His death will awaken the conscience of people and prompt them to work for marginalised people,” said Father D’Souza.

Many people like former Supreme Court Judge Madan Lokur expressed disappointment at the orders passed by courts, the manner in which authorities and courts handled his detention.

“He had to go to court for a straw sipper, I have seen the pulverisation of human rights over these years, and I am witnessing a downhill slide in the trampling of human rights. Things have gotten worse since the vilification of the Shaheen Bagh women. All we need is a little bit of humanity and kindness,” he said.

Similarly, journalist N. Ram condemned the authoritarian strengths that violate the rule of law and “are motivated by communalism.” He referred to human rights defender Sudha Bharadwaj who is languishing in Byculla jail for nearly three years, suffering worsening health.

“It’s a sad commentary and courts are not acting proactively. We are very disappointed by the higher performance of the judiciary,” said Ram.

Building this further, human rights defender and journalist Teesta Setalvad called his death an institutional murder. She remembered how often Swamy sent articles describing the situation of Jharkhand Adivasis, for whom he filed PILs. Setalvad said that despite his arrest, Swamy was worried about other undertrial prisoners, including the Bhima Koregaon accused.

She urged courts to regularly monitor prisons and ensure timely legal aid. She also called his demise “death in custody”, as he was still an undertrial prisoner at the time. As such, she called for a judicial inquiry into this death.

“We have lost him in a tragic way. We owe it to him and others incarcerated that we leave vibrant campaigns to ensure prison rights and ask for the repeal of the UAPA law. Such laws that are unjust have no right here,” said Setalvad.

Many attendees asserted this demand including Centre for Study of Secularism Director Irfan Engineer. He called upon civil society organisations to demand the unconditional revoking of the UAPA, release of the Bhima Koregaon accused and others imprisoned under draconian laws. “We are a democracy and here freedom of speech is being curbed,” he said.

Further, vocalist and Ramon Magsaysay awardee TM Krishna talked about how no person was willing to arrange a Covid-19 test for the priest. He also talked about the lack of human empathy for ensuring basic needs and appealed for a collective social energy through public and judicial action to keep the movement alive. Krishna considered it “vulgar” that an 84-year-old man was allowed to die. He finally hoped Swamy’s death would be a “galvanising moment for all to ask for the repeal of UAPA and other preventive detention laws.”

Journalist and novelist Nayantara Sehgal said that as a writer in mourning, Father Stan was a man of God who taught the true meaning of religion, to love our neighbour. Sehgal said Swamy did not die but was killed because he worked for the poor, their forest and land rights.

Swamy’s lawyer Mihir Desai said the Jesuit father’s arrest was deliberate, wrongful, and malicious. “They arrested him and put him in jail without seeking custody. We should keep his memory alive, we must keep fighting,” he said.

World Organisation against Torture’s Gerald Staberock criticised the government for its inaction and demanded responsibility from the same.

“It is cruel to put someone in jail at this age. It’s inhumane treatment,” he said and also called for the release of all other human rights defenders who raised their voice against the government.

Further emphasizing State cruelty, International Federation for Human Rights member Alice Mogwe said the federation repeatedly asked the Government of India for his release since November 2020. She condemned the government for “shutting down every voice against it and this is concerning.”

“These [UAPA] laws are used as an excuse to put people in prison for a very long time. The UN will soon publish a report on the inhuman practices of charging human rights defenders with jaildom. Those working on indigenous rights are those defenders at greater risk of being targeted. His jail is a stain on the reputation of Indian authorities and it will last forever,” said Lawlor.

Later, Fr Stan’s grand-daughter Sheeba remembered how he rarely visited his village Trichy because he considered the Jharkhand Adivasis his family.

“He was brave because he knew he was right and he knew his calling. Thank you to all who took care of him,” she said.

Other family members also spoke about Fr Stan’s commitment to Adivasis and his love for his claimed family. They condemned the manner in which he died that did not even allow his family to attend his last rites. Family member Lincy said Fr Stan found his calling and lived accordingly.

From the Jesuit community, Jamshedpur Jesuit province member Father Jerry Cutinh referred to Fr Stan’s poem that said, “Caged birds can still sing” and called him a brilliant mind. He added, “Before his arrest in Ranchi, he said, if working for the poor is sedition and a crime, I am ready to face the consequences. His spirit will live on.”

Others like former Archbishop of Canterbury, Mumbai Jesuit Province’s Father Arun D’souza, Father Jesuit provincial of Chennai province, Father Jebamalai Raja and Father Jeyaraj, on behalf of Father General and all Jesuits in Korea paid their respects to Swamy. Jose Maria, from Portugal and people from Turkey also attended the event. Father Danis, from Fr Stan’s hometown, said a few words in his memory. He thanked God for providing Father Stan to the entire world.