Three members of the same family have reportedly died of hunger in the last six months at Karama village in Bokaro district. Surprisingly, organizations and activists active on hunger deaths, including the right to food, have kept silence on this issue. 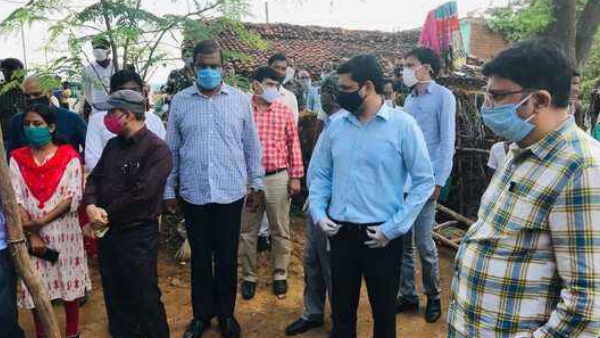 Bhikal Ghasi died of hunger on 6 March 2020. Then 2 months later, in May, his young son died. Two months after this, on 31 August 2020, 12-year-old daughter Rakhi also died of hunger. The tragedy occurred with a Dalit family in Karama village of Kasmar block in Bokaro district. If there are any survivors in this family, then the widowed daughter-in-law and the widow of the young son with a dilapidated body and other people of the selected family, who may not know when to come.

There is no difference between which government came and who went away, for these residents of Dalit group living in Karma village living in terrible poverty – Kangali-born hunger – malnutrition – illiteracy. Because their plight of life is not meaning to anyone.

According to the nearby villagers and other relatives, Bhikal Ghasi and his son and daughter have died due to severe poverty-causing hunger and malnutrition, but as always the same will be claimed in the administrative staff and medical reports from the local to the top That these deaths were caused by disease.

Therefore, by performing a few rituals of government investigation, the victim family will be given immediate compensation and grain and the matter will be cooled there itself. The sequence of deaths due to hunger and malnutrition in the state of Jharkhand proves that the government will not change the miserable status quo of the marginalized people.

It is worth mentioning that when 10 years old Santoshi died of hunger while saying ‘Bhat-Bhat’ in Karimati village of Simdega in the state on 28 September 2019, during the last BJP government of the state, there was a lot of noise about this matter from Ranchi to Delhi. Due to which the BJP government was also very bad.

Many social organizations have vied for issuing ‘fact-finding’ reports. The then Leader of the Opposition, Hemant Soren, surrounded the BJP government on the hunger death case and made it a major issue of his election campaign.

Surprisingly, now that he is the Chief Minister himself and his government, who these days are often taking cognizance by immediately tweeting on every small incident, nothing has been said on these deaths so far.

State CPI Male has called the incident as a “gross negligence of the government and administration towards the poor and Dalits of the state and demanded strict action against those responsible for the three deaths.” At the same time, the opposition BJP, which is not leaving any issue to surround the Hemant government, is running a protest program under the banner of its Scheduled Caste Morcha.

In many places, by burning candles in memory of the deceased Rakhi, Hemant is asking the government to resign on moral grounds. It is also disturbing in the discussions that social organizations and activists have not shown any activism till now on issues such as food rights, active in the state and campaigning like ‘Hunger Watch’ survey.

In this regard, the young activist Dheeraj, who was actively associated with the Right to Food Campaign and raised the issue of death of Santoshi, was angry with the then Raghuvar Das regime and administration said that – by raising such issues in the BJP rule, the BJP government A large number of encircling social organizations and activists are completely silent against the shortcomings of the new government of the state. Even if some are speaking, then in a posture of a petitioner which is very unfortunate.

Eminent economist Prof. Expressing concern over the deaths due to hunger and malnutrition, Ramesh Sharan states that Hemant Soren should continue to resolve the central and state disputes, but more importantly, to remove the poor people of the state from the crisis of hunger-malnutrition and unemployment. Give priority to

In this context, giving information about the suggestions given by the people associated with the government, we said that we have clearly told them that the most important thing right now is to work in a quick manner by making the issue of governance in the state first and foremost. For which the government became particularly serious on challenging issues such as hunger-malnutrition – unemployment and migration, along with curbing the infection of the epidemic. For this, by making timely special action plans, focus on making the entire administrative staff work effectively.

On the question of Dalits, senior social activist Vishwabandhu associated with the All India Forum, who has been active for a long time, said with indignant pain that the Dalit natives here also played an important role in the movement to create a separate state of Jharkhand and suffered repression but after the formation of the state Till date, the people of this society and all their questions remain marginalized, which is an open proof that even after 19 years of the formation of the state, the majority of the people belonging to hunger and malnutrition in the state are the victims of the Dalit community. No social organization and activist also raise the questions of these communities because all social funding is available only on tribal matter.

Describing the agitation being carried out by the BJP and its Dalit Morcha over the death episode of Bhukhal Ghasi and his son-daughter, he said that where many Dalits including Santoshi were dying of hunger in his government. Vishwabandhu has accused the present government and administration of being insensitive.

He says that the disease and lack of blood should be put on the real matter as much as the cause of these deaths. After every death, the administration remains in such action for a few days as if no incident will happen again, but then the same old attitude is established. That is why the famine deaths of Bhukhal Ghasi and his children are screaming out from the government called ‘Abua Raj’ of Hemant Soren, when the government has changed in the state, when will the working behavior of the system and our life situation change …?